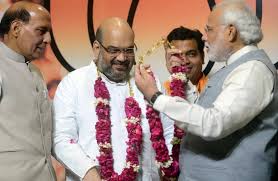 The last time a newly appointed BJP president alluded to his humble origins before the party’s national council was on August 3, 2002. An emotional Venkaiah Naidu broke down at the Talkatora Stadium while talking about being born to ‘‘a farmer’s family in a remote village far down in the south’’ and declared that ‘‘this kind of amazing journey from being an ordinary party worker in a hamlet to leading the party at the national level is perhaps possible only in BJP”.

Cut to 2014 and Amit Shah began his first presidential address to the same body with a very similar message, albeit in much more measured, calculated terms: “There are more than 1,200 political parties in India,” he declared. “But there is hardly any party where a worker could be elevated to the highest position of national president.”

Irrespective of ideological filters and discomfort in the liberal intelligentsia about the new Modi-Shah combine now leading BJP into its future, there is a powerful message of upward social mobility wrapped in this packaging. At 49, Amit Shah is not only the youngest party president ever of India’s ruling party, his age is also much closer to the Indian median age of 27.
In an intensely political country where 65% of the population is below the age of 35, BJP is also positioning itself as an open house for an aspirational youth bulge where talent, of whatever shade and hue, can and does rise. Notwithstanding the ever-present shadow of the Sangh, it is certainly a much more open house than its contemporaries, barring AAP.

In contrast, accession to elite levels in the six other national parties is a relatively closed shop. Congress remains hostage to dynasty, not only at its apex level but at state levels too where access and patronage arguably remain far more important than winnability. Nationalist Congress Party has the same problem and BSP remains Mayawati’s personal fiefdom despite its crushing loss in UP.
Communist parties are more structured but much more secretive with power residing in closed cabals. Go further down the pecking order and in state after state, regional parties are essentially family-controlled units: from Parkash Singh Badal’s Akali Dal to Mulayam Singh’s Samajwadi Party and of course the Dravidian parties.

Keeping aside the visual imagery of BJP’s “man of the match” of 2014, as PM Modi called him, there is a much more structural transformation that his ascent signifies. “Social engineering” is a term he stressed in his inaugural speech and its success in UP in the general election and the manner in which it was pushed through signifies a major shift in BJP’s politics.

To be sure, social engineering is now new to BJP. Social scientists have long documented the strategies of identity-building and appropriation of lower castes that the broader Sangh Parivar adopted in the 1980s in the wake of the Ramjanmabhoomi movement and Mandal agitation, which took BJP from a paltry two seats in the 1984 Lok Sabha elections to Raisina Hill in the mid 1990s. Its successes in Gujarat and Chhattisgarh, in particular, owed to a systematic co-option of adivasis and dalits within the broader frame of a Hindu identity, which supplanted older notions of ‘suvarna’.
Spearheaded by the likes of Kalyan Singh in UP, these were the fruits of BJP’s first wave of social engineering. These gains, however, were frittered away almost immediately thereafter amid party factionalism, the headiness of power under the Vajpayee regime and a general drift in direction after the shock of the 2004 defeat.

What Amit Shah is now promising is a second wave of social engineering. This is what is so different about BJP this time and UP was the first test of this new thrust.
In the first wave of social engineering, while backward caste voters moved towards BJP, their real influence remained limited. Social scientist Christophe Jaffrelot has shown that their proportional representation in the party’s national executive and that of MPs returned from the Hindi belt did not change significantly in the 1990s.

In contrast, in UP in 2014, Amit Shah spearheaded a realignment which saw the projection of Modi as India’s first OBC prime minister, the promising of a Bharat Ratna for Kanshi Ram, and a concerted effort to break the dalit vote. This meant replicating older BSP strategies of venerating dalit icons, except that BJP chose to focus oncommunities like Valmiki, Pasi, Sonkar and other non-Jatav categories that were unhappy with Jatav dominance in Mayawati’s BSP. This was combined with ruthless ticket selection, a tech-savvy rural communications campaign and 27 seats to OBC candidates despite strong opposition by local apparatchiks. The result was an unprecedented 73 seats.

This second wave of social engineering is different because it is backed by a newfound layer of managerial efficiency, and a ruthless clarity of purpose about ideology and its goals. This is why both Amit Shah and his mentor, Narendra Modi, stressed the idea of what they called “Congress-mukt” Bharat. How their equation and this project unfolds could fundamentally refashion long-held certainties about Indian politics. BJP’s new president is a man to watch and his rise necessitates an intellectual rethinking in other political parties. 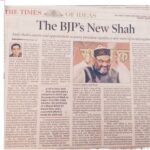