How the burka became ‘cool’ 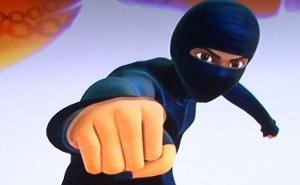 When your four-year-old boy starts thinking of the burka as cool, it is time to sit up and take notice. Especially, when the burka comes repackaged as ninja-all-black on a Pakistani superheroine, destroying Taliban-like goons while moving to background music that sounds like a cross between Spiderman and Mission Impossible. An iron lady who despite living in the land of Malala Yusufzahi, uses books and pens as weapons to fight an enemy called Baba Bandook. Just as the mean streets of 1940s-New York led to the creative tensions that gave us Superman and Batman, the Talibanization of Pakistan and the recession of its modernity into an English-speaking ghetto has given rise to its first and possibly the world’s most exciting animation experiment in years: the Burka Avenger.

While our very own kids’ sensation Chota Bheem who lives in the timeless, make-believe world of Dholakpur where rajas still rule but kids also play T20-cricket and even go on expeditions to the North Pole, the Burka Avenger’s world is set in in the North Pakistani town of Halwapur. It is constantly in danger of being taken over by the evil magician Baba Bandook, who looks like a Taliban commander, and is in cahoots with the corrupt politician Vader-Pajero. School-teacher by day, burka-clad avenger by night, Pakistan’s new superwoman was created two years ago in Islamabad, got nominated for an Emmy in Hollywood, ranked among the world’s most influential fictional characters by Time, and has now made her way into Indian television homes. This is the link with my four-year-old, who is among the many hooked on to this cleverly subtle social commentary on Pakistan’s daily challenges, masquerading as a sweet children’s caper.

The most delicious irony though is the use of the burqa as a super-uniform of real power, inverting its usual stereotype of suppression and inequality. Explaining the burka innovation, series creator AKA Haroon has been quoted as saying that the burka is simply hiding her identity like other superheroes and since the main character “is a woman, we could have dressed her up like Catwoman or Wonder Woman, but that wouldn’t have worked in Pakistan.”

Haroon’s allusion to western superheroines points to another irony. America, the supposed bastion of modernity, feminism and individual freedom has created many super-heroines before but almost all of them were redolent with sexist imagery: more Barbie-doll than substance, conforming to male stereotypes of womanliness even when they were saving the world.

The early Wonder Woman comics in the 1940s, for example, were bizarrely full of women-bondage scenes, and the comic-book historian Tom Hanley has persuasively shown that Wonder Woman, during her curious career, became as much a feminist icon as a feminist failure.

So is Burka Avenger then a new feminist icon? It sits right in the middle of the visceral debate about the burqa itself and challenges orthodoxies. On one side of the argument are those like Nicolas Sarkozy, who as French President in 2009 denounced the burka as a “sign of subjugation and debasement”. On the other, are women who defend their right to wear the burqa as an inalienable personal right.

Then there are sociologists like Z. Fareen Parvez who have done studies to show that the burka debates miss the point. Many burka-wearing women, in this view are not engaged in a form of politics but rather what may be called “anti-politics”: a rejection of politics, a valorization of private life against the intrusive outside world and a retreat into a moral community. Other like the Sudanese writer and iconoclast Ayaan Hirsi Ali, who once wore a hijab, argue that many women don’t have a choice in the matter of the burka. They just wear it because others around them do and it can’t be restricted even if it is a symbol of oppression.

This is where Burka Avengers completely inverts the moral debates around the burka, making it a symbol of super power. Linking it to books and learning, it cuts through the politics to create real entertainment and empowering messaging. To yearn for “justice, peace and education for all” in Pakistan, as Burka Avenger does, is expected. But it takes special chutzpah to do this by re-inventing the garment and to turn it back like a ninja-weapon onto the mullahs of fundamentalism.

It is also, along with our very own Chota Bheem or Mighty Raju, part of a powerful new indigenous wave of compelling story-telling and counter-narrative of tales from the soil that challenge the Disney-dominated worlds of our children.

8 in 10 Indians have a favourable view of Modi: Pew Research