The last time a government was really worried about the attendance of a nominated Rajya Sabha MP was when Pramod Mahajan as Minister of Parliamentary Affairs pulled out all stops to get Lata Mangeshkar to fly down from Mumbai and cast her vote during the special combined sitting of Parliament convened by the Vajpayee government to pass the Prevention of Terrorism Act.

Lata didi flew down that time but did little else of note (including attending sessions) during her time as a nominated member of the upper house. The furore over Sachin Tendulkar’s non-attendance now has once again focused attention on the role of nominated MPs: are they meant to bring their expertise to bear on questions of national importance or are they mere ornamental eye-candy, passive beneficiaries of the propensity of cynical governments to score a few brownie points by nominating those whom they see as public heroes.

This has always been a dubious political logic — nobody votes for you just because you nominate a Sachin or a Lata — but the nominated members are expected at the very least to bring in domain expertise and a different perspective to governance debates. 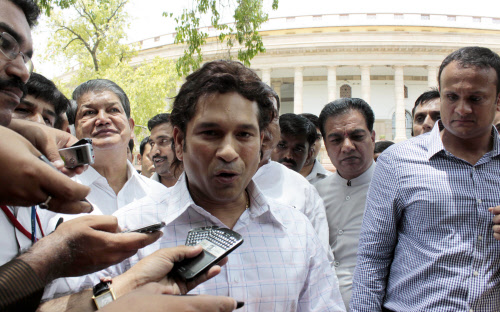 Many of these made erudite interventions in Parliamentary debates. Zakir Husain went on to become President but hardly anybody today would remember Prithviraj Kapoor as a Parliamentarian. The legendary actor went on to become a memorable Akbar in Mughal-e-Azam, but politics remains a forgotten footnote in his career. Or for that matter, in that of MF Hussain, another nominated Rajya Sabha MP in recent years who hardly ever turned up.
So what is the big fuss about Sachin’s non-appearances? He is hardly the first MP not to take his attendance duties seriously. And in a Parliament full of non-performers does it really merit such a hue and cry?

The difference is that for most other lesser-known MPs, non-performance or non-attendance is simply not noticed. But if you are Sachin, it gives the media a convenient talking point, channels get to loop his footage constantly and it is easy to conjure up what appears to be another national scandal involving yet another politician.
It is instructive to compare Sachin’s performance with those of other nominated members in this Rajya Sabha. Attendance is not the only barometer of performance and if you look at the record of other independent nominated members in this Rajya Sabha not many have really been outspoken speakers, intervening in debates and acting as a sort of moral conscience in the way that Shabana Azmi did for a while.

Going by records made public by the Rajya Sabha Secretariat on its website, only HK Dua and KTS Tulsi have regularly asked questions to ministers. The record shows that others like Anu Agha, Rekha and even Javed Akhtar have never officially put forth questions to government (as opposed to attending or participating in debates). 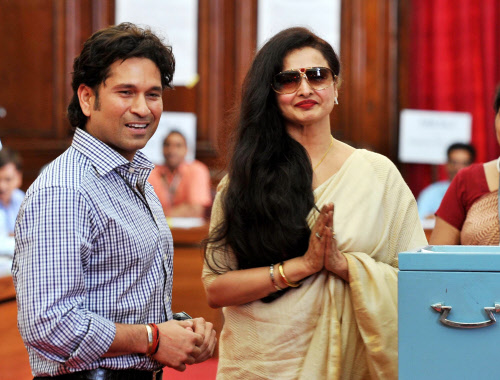 If you look at money spent by these MPs on their designated constituencies, only HK Dua (South Delhi) and Ashok Ganguly (Mumbai City) have spent all the money sanctioned so far to them, Anu Agha (Pune) and Bhalchandra Mungekar (Sindhudurg) have spent around 70% of the funds released and B. Jayashree (Bangalore Urban) nearly 80%.
Further down the order, Javed Akhtar (Mumbai Suburban) and Mrinal Miri (Kamrup Metropolitan) have only spent around 30% while K Parasaran (Chennai) has managed to spend a paltry 4% of the money sanctioned so far.

Rekha and KTS Tulsi have not opted for districts yet while Sachin can spend money on Mumbai Suburban but the 15 crore available for him hasn’t yet been made available.
Among the present cohort, those like Javed Akhtar may not directly revel in the cut and thrust of parliamentary debate but certainly weighs in often enough in the public space on ongoing issues.
No one really expected Sachin to set Raisina Hill abuzz but he did raise expectations just after his nomination by presenting a sports development plan to the then-government. Much like he single-handedly shouldered the burden of Team India for years, there was an unreal expectation that somehow he would don his saviour cape and act as a much-needed advocate in Parliament for India’s much-neglected sportsmen and women.

The real grouse with Sachin is not that he has not emerged as a leading Parliamentarian in the technical sense but that he has never used his stature to act as a moral weathervane to steer policy debates on sporting issues in the right direction.
Even when he was playing and captained India, most of his fans had the same problem with him. He was the undisputed star on the field, but off the field, India always hoped that someday he would break free of his self-imposed shackles, speak up freely on cricketing issues and set the agenda. Instead, his style was always to let his bat do the talking and to take the quiet, uncontroversial, safe route off the pitch.

Now, of course, he is no batting anymore and we are expecting him to do without the bat what he has never done before.

All of India would sit up and applaud if he does decide to change direction and throws his public caution and seeming indifference to the winds but a lifetime’s habits are hard to brush off and perhaps its asking for too much.

Sachin didn’t ask to be made a Rajya Sabha MP and perhaps we should just be satisfied with what we have. So what if Sachin doesn’t want to talk or come to Parliament. At least he could bat!