Why Chetan Bhagat is wrong about Indian liberals 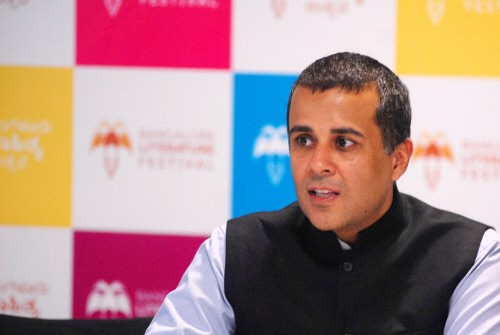 India’s biggest-selling novelist Chetan Bhagat has taken a huge swipe at Indian liberals in the Times of India (November 2), arguing that they usually have “no clue” and “no solutions” about what India should be like. This is primarily because behind their modernist façade, liberals are just superior English-speaking children coming out of class privilege, upset at being replaced by Hindi medium types at India’s social high table.
Having once looked down upon those speaking vernacular languages and seeing Hinduism as backward, these people are insecure with the rise of people not-likethem and have rebranded themselves as “liberals”. If, “Modi and Amit Shah had gone to Doon School, or studied in college abroad, or at least spoke English with a refined world accent,” Bhagat argues, “the liberals would have been kinder to them”. Sorry, but he is completely wrong. Though India’s literary snobs have long dissed Bhagat’s commercial successes he remains, as Aakar Patel argues, “our most remarkable novelist”, one who is “more read by the middle class than were P G Wodehouse, Irving Wallace, Sidney Sheldon and James Hadley Chase – all put together”. This is why it is important to point out the ignorance and falsehoods in his claims.

First, Indian liberalism in general and protests against intolerance in particular have never been about only a small, privileged English-speaking class. Of the three dozen or so writers who returned their Sahitya Akademi awards, only three received it for writing in English. As many as nine got it for writing in Punjabi, ten Hindi, four Kannada, two Telugu, and one each for Malayalam, Assamese, Urdu and Kashmiri.

Among liberals who have been murdered: Malleshappa Madivalappa Kalburgi was a noted epigraphist of Kannada; Govind Pansare wrote his best-selling Shivaji biography, ‘Shivaji Kon Hota’, in Marathi; and Narendra Dabholkar’s courageous work against superstition as part of his Maharashtra Andhashraddha Nirmoolan Samiti was primarily in the heat and dust of public meetings, not air-conditioned drawing rooms.

Indian liberalism, which is essentially about respecting all equally, is not an elite creation of those “sipping tea from fine china cups” or a sleepover party of hedonistic elites. It is at least as old as the syncretic fusions created by Nanak and Kabir and can be traced all the way back to the Rig Vedic tradition that “there is only one truth, only men describe it in different ways”.

The great Swami Vivekananda, revered among others by Prime Minister Narendra Modi, was also a torchbearer of this liberal tradition of ancient Hinduism. He wowed the West with his iconic Chicago speech in 1893 by highlighting precisely this stream of tolerance as the heart of Hinduism. Vivekananda’s later comment that “You will be nearer to Heaven through football than through the study of the Gita” would have earned him censure from the Hindu Sena were he to say it today.

India’s Constitution was created by a great liberal, Bhim Rao Ambedkar, whose iconic ‘Annihilation of Caste’ remains one of the most original critiques of Hinduism. The man he fiercely criticised as a traditionalist Hindu, Gandhi, was also a liberal in the sense that he wanted “the cultures of all lands to be blown about my house as freely as possible” even as he refused to be “blown off my feet by any”.

From the late Hindi journalist Prabhash Joshi who wrote ‘Yeh to Raghukul Nahi’ after the Babri masjid was demolished to Mahasweta Devi who only writes in Bengali to the Hindi TV anchor Ravish Kumar who was born in Motihari but still returned from Dadri “feeling like a corpse” at the lack of remorse over the killings, Indian liberalism lives precisely because it is rooted in Indian tradition, not because it is some artificial creation of whiny English speakers at a cocktail party. India, in other words, is not Pakistan, where columnist Khaled Ahmed argues the only way you can keep writing about fundamentalism or terrorism is to “touch foot” and apologise to those offended.

Second, the charge of elitism echoes the derogatory charge of ‘Macaulay-putras’ that the right wing has long furnished. Macaulay started English education in India with his infamous 1835 Minute which argued that “a single shelf of a good European library was worth the whole native literature of India and Arabia”.

It was nonsense, of course, but to speak English in India today is not a crime. It is at the heart of our revolution of aspiration as everyone from Kapil Dev who once modelled for ‘Rapidex English Speaking Course’ to the millions of poor who queue up for admissions for their children in private English schools can testify.

Third, yes, among the liberals, some identify with Congress or the Left but the vast majority do not. There is nothing that connects a Dibakar Banerjee or a Krishna Sobti with any party-political position except for a general abhorrence for intolerance.

Fourth, many liberals do respond to Islamic fundamentalism and to Congress intolerance. The charge of being “pseudo-secular, pseudo-intellectual and pseudo-liberal” applies much more to Muslim politicians but not intellectuals like Javed Akhtar, who has often spoken against it, or Syeda Hameed, who authored a detailed report on reform in Islamic marriage laws.
Secular liberals do have solutions, just as Ambedkar did. Going to elite institutions, like he did to Columbia and LSE on a scholarship, is not necessarily a sign of privilege but of academic excellence. Just as it was for Bhagat.