The India-China relationship is one of the most significant bilateral relationships of the 21st century. While the economic and strategic aspects of this equation have long been debated, the role of the media on both sides is much less understood. Together, the two countries constitute the world’s largest media market and the day-to-day concerns of media on both sides can have serious consequences for the future of international relations and for daily diplomacy and national perceptions in China and India. To better understand the evolving role of the media in the India-China relationship, ISAS, National University of Singapore, organised the ‘China-India Media Mediation’ workshop on 17 and 18 May 2012. It brought together senior representatives from the Chinese and Indian media and senior academics from Singapore, Australia, United States, Canada, China and India. Parallel to this, was the India-China Dialogue organized by Singapore Consortium for India-China Dialogue, Institute of South East Asian Studies and Observer Research Foundation. I co-organised these dialogues and the result has been a path-breaking new book providing fresh insights from both sides of the border on India-China relations and the role of the media, co-edited by Prof. Robin Jeffrey and Dr. Ronojoy Sen, and published by Sage. 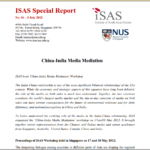 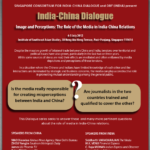