THE COMIC MAKER OF INDIA 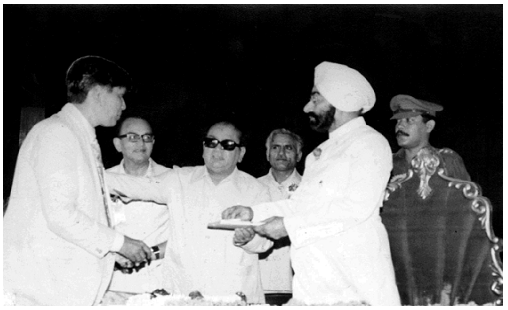 I am a child of Amar Chitra Katha. Poring over the comics was one of the greatest delights of my childhood and Ananth Pai, who died last week, gave millions of us who grew up in the 1980s our first imaginaries of the past, our first mental maps of history and mythology.

Despite the disdain of many a professional historian, the comic books he created have come to occupy an iconic place in Indian popular culture and what Sunil Khilnani calls the ‘great Amar Chitra Katha of our national imagination’.

You can quibble on detail but you can’t question the social place of a series that has sold over 90 million copies in 11 Indian languages, with translations into French, Spanish, German, Swahili, Fijian, Bahasa Indonesia and even Serbo-Croat.

Much has been written about the foundational moment when Pai in 1967 saw a TV broadcast at Delhi’s Maharaj Lal and Sons of a quiz contest where Delhi college students were correctly answering questions on the Greek gods of Olympus but were clueless when asked the name of Ram’s mother.

As he told me five years ago, that memory still stung him. “Our children are getting alienated from their roots and culture,” he said.
So what made Amar Chitra Katha special? Television was still in its infancy at the time, with less than a 100 TV sets in all of Delhi but that chance broadcast provided the kernel for an Indian series, with Indian stories for Indian children.

Amar Chitra Katha’s first 10 titles were merely reprints of the American ‘Classics Illustrated’ but its first Indian title, ‘Krishna’, became so successful that the series moved entirely into Indian themes.

Part of the legend of Uncle Pai is the explicit marketing of the series as a modern-day family elder, aiming “to fill the lacuna left by grandparents in the smaller nuclear families in urban areas.” What is less well known is the sophisticated marketing effort and the support of the state that sustained this.

The comic book historian John A Lent says that Amar Chitra Katha’s rapid success in the 1970s was linked to a vigorous promotion effort targeted directly at schools, including quiz and fancy dress competitions, debates and the formation of Amar Chitra Katha/Tinkle clubs.

The series gained the state’s approval from the late-1970s. The central government’s interest followed from a survey carried out at Pai’s behest in 31 Delhi schools, which showed that children learnt better through comics than books.

This was crucial and an Amar Chitra Katha-organized seminar, “The Role of Chitra Katha in School Education” in 1978 won it the seal of approval from the education ministry, NCERT and the Kendriya Vidyalaya Sangathan.

Since then, literary support programmes with the libraries of government-aided schools have always been an important part of the series’ commercial success.

This turned Amar Chitra Katha into a quasi-public institution. As a vehicle of popular culture, each issue negotiated a complex minefield: the simplicity required for children versus the complexity of history and its many versions; sales versus educational imperatives; accuracy versus political interests.

For example, when Amar Chitra Katha’s portrayal of Valmiki as a thief before he wrote the Ramayana led to protests by a Dalit group in Punjab, Pai removed the issue from circulation, travelled to Jalandhar and Patiala to meet the protesters, and tried to enlist the services of the Congress’ senior Dalit leader Jagjivan Ram as a negotiator with the groups concerned.

He waited a long while before coming out with another issue that involved the question of untouchability.

Staff were reportedly instructed to be sensitive towards lower caste readership and when ‘Chokamela’ – a title on the 14th century Dalit bhakti poet – came out in 1983, its launch was presided over by then Union Home Minister Buta Singh, also a Dalit leader from Punjab.

Similarly, when Amar Chitra Katha came out with its series on the 10 Sikh Gurus during the Khalistan insurgency, it took care to get the script for each issue approved by the Shiromani Sikh Gurudwara Prabandhak Committee – and this was explicitly printed on the inside cover page.

A few years ago, when the Aamir Khan film Mangal Pandey got engulfed in a bitter debate about historical authenticity, Pai emphatically told me in an interview that “the movie is certainly not real history…our Amar Chitra Katha version is based on authenticity”. It was a revealing comment, this effort to project authenticity, at least his kind of it.

Of course, Amar Chitra Katha has always projected a certain kind of popular history and historians have long turned their noses at it, but what mattered was that people – and parents – believed this version of the story.

Tellingly, Pai once told an interviewer that he first realized the impact of his series when he overheard two government servants resolve an argument on a point about the Ramayana by referring to his comic book.

For over 40 years, Amar Chitra Katha has been the nation’s comic: encompassing in its pages debates that have constituted the modern Indian nation. Its future hinges on how it adapts to the changing market but its past is undeniable. This is the legacy of Uncle Pai.