Lord Harris, governor general of colonial Bombay (1890-1895) and co-founder of what was then the Imperial Cricket Council, captured for posterity the centrality of cricket in the British Empire when he declared that to play “cricket is more remote than anything sordid, anything dishonourable than any game in the world. To play it… is a moral lesson in itself and the classroom is god’s air and sunshine.” Had he been alive today, Lord Harris would have found that the “god’s air” of cricket now smells of Indian rupees, and, yes, the heat and dust of the Indian elections. The IPL’s decision to move overseas, and the heated debate around it, is highly revealing on several counts. First and foremost, we have the BCCI behaving like a petulant child whose favourite piece of chocolate has just been snatched away.

Shashank Manohar’s direct attack on the governments of Andhra Pradesh and Maharashtra and his apology to Indian fans is simply the apogee of a month-long campaign to portray the IPL as a key marker of Indian nationalism and a signpost of the Indian state’s readiness, post-Mumbai, to get on with life-as-usual. With TV channels berating the government for forcing the “Indian” out of the Indian Premier League, it is important to reiterate that the IPL is a private league. It is supported by the BCCI, no doubt, but this is primarily a privately promoted tournament — it is not an international series, nor a domestic one like the Ranji Trophy. Even it were, to suggest that the hosting of a cricket tournament in the middle of the most massive election the world has ever known — make no mistake, that is what the Indian election is, in sheer numbers — should take precedence, is utter nonsense. Cricket can not be seen outside of its social context. Even at the best of times, security can never be foolproof and after Mumbai, prudence and preparation should be paramount, not jingoist muscle-flexing.

Sensing an opportunity on its pet platform of national security, the BJP is already on the warpath arguing that not having the IPL in India is tantamount to losing to terror. This line of thinking goes as follows: Indians love cricket, IPL watchers will be hurt at being deprived of cricket at home, they will blame the government for lack of security. Ergo they might vote for BJP. Cricket has always been a handmaiden of politics in India — the number of politicians running cricket associations is a simple marker — but in a year when Obama has transformed the electoral matrix in Bush-land, the spectacle of India’s two premier parties jostling over cricket just three weeks before the election is symptomatic of a contest bereft of any great ideas. It would be funny, if it wasn’t so tragic. Cricket can not live in its own private la-la land, even if it is run by some of India’s richest people.

The second thread running through the debate is the outrage over the IPL going overseas. One would think the government has just pawned away the national gold reserves. In a world where the Microsofts and the Googles outsource a great deal of their work to India, why can India not outsource its most famous export to England or South Africa, as a one-off? The IPL could not have been postponed because the dates clashed with the international cricket calendar. The failure to foresee a clash with the elections is a blunder that should cost someone their job at the League. It was a Hobson’s choice: shut down this year’s edition, with the all the attendant damage to branding and revenue losses, or outsource. But the outsourcing itself brings in huge costing over-runs. Early estimates range from losses to the tune of 300-1,000 crore in terms of logistics, travel, diminished gate earnings, higher stadium fees, in-stadia advertising and the possibility of a rethink on the price of TV rights.

The IPL experiment, irrespective of whether it succeeds or fails, has deep implications for debates about post-colonialism and globalisation. England, the original home of cricket, stayed away from last year’s edition and its early reluctance to embrace the League was at least as much to with reluctance to embrace the new era of Indian control over cricket as with genuine problems over scheduling. The colour of money has changed all of that this year, with Andrew Flintoff and Kevin Peitersen’s record contracts and the ECB’s prompt yes to the chance of playing host. Despite the prospect of short-term economic losses with an overseas edition, the experiment holds the promise of globalising the League like never before and drawing in new audiences, outside the subcontinental diaspora. It is a great branding opportunity, one that could have significant long-term benefits for the IPL in terms of its fan-base.

The “god’s air” of Lord Harris’s cricket certainly has an Indian twang now —with all of the grand drama of Indian politics, the backstage skullduggery and the grandstanding. For now, India’s cricket bosses would do well to remember that there is a national election unfolding — whatever they might think, it matters — and that when the time comes, they may be better off showcasing another great Indian trait: that of the willow and the ball.

The writer is a social historian and a fellow at La Trobe University, Melbourne. 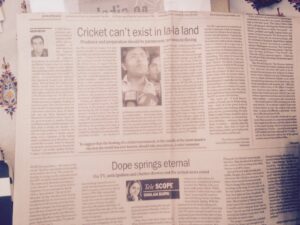