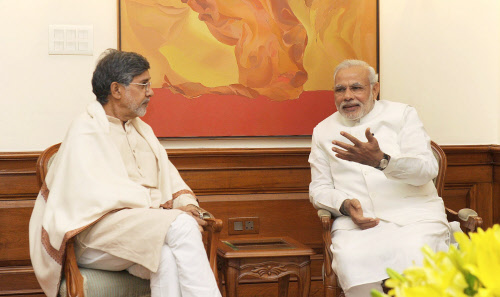 Kailash Satyarthi has won 2014′s Nobel peace prize with Pakistan’s Malala Yousafzai. He discusses his spiritual motivation, his mother’s fears, his expectations from PM Modi — and how he was almost murdered by Pakistani soldiers with Nalin Mehta:

Congratulations on this honour — but in India, do we only recognise people after they’re honoured overseas?
Well, when i gave up my engineering career, my mother was crying because she’d spent a lot of money and had high expectations. My father died early and she was frightened about my future — i told her, one day you will be proud of me.

Pride, honours and awards don’t matter much to me personally. I am not a saint but i’m driven by spiritualism, not political theories or mere emotions.

Please explain your spiritualism?
I am not a religious person. I’ve not gone to a temple or mosque in the last 40 years. I don’t worship in temples because i worship children — by giving them freedom and childhood. They are the true faces of God and that is my strength.

When i started talking about the rights of children in 1981, the UN convention on children’s rights hadn’t yet been born. The notion of child rights came only in 1989.

Perhaps the Nobel Committee researched all those things and asked, who is this crazy guy who could see the future?

Some suggest child labour can’t be eradicated without eradicating poverty — your view?
People say poverty creates and perpetuates child labour. This is a half truth.

The full truth is — child labour creates and perpetuates poverty. If you allow child labour, you allow poverty and illiteracy to continue.

How supportive has the government been of your efforts?
This is a new government, so let’s see, but we expect a great deal. I requested the PM on the very first day, saying now that a tea boy has become India’s PM, it is his turn to ensure no child becomes a child labourer.

How will you spend the Nobel prize money?
I don’t know. Such decisions are taken by an elected group of children in my organisation. In a Bal Mahapanchayat, children from 400 villages will meet and decide democratically what we should do with this money — but every single penny will be spent on the mission to end child labour and child slavery.

What did you say to Malala Yousafzai when you both spoke?
I invited her to join a new ‘Peace for Children’ initiative. Let every child live in peace, in my country, in Pakistan and everywhere in the world. Children shouldn’t be compelled to grow up amidst war and conflict. Let’s begin with India and Pakistan.

She thought it was a brilliant idea but she has her own constraints and cannot go to Pakistan. We’ll talk again. I have a lot of respect for her.


She wasn’t even born when i helped start Pakistan’s anti-child labour movement, when Pakistan’s army wanted to kill me outside Lahore in 1987. I was addressing brick-kiln workers there when soldiers came and put a dozen guns on my head.

I smiled and said, please kill me but only after 10-15 minutes when I’ve finished talking to these people.