Much like Mumbai on 26/11, the terrorists in Paris have attacked the heart of what it is to be a Parisian. Attacking cafes in a city of cafes, blowing up of the Bataclan Theatre in a city that is symptomatic of culture and bomb blasts that shook the Stade de France where the French football team was playing a friendly game with Germany. 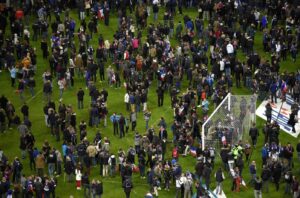 The death toll is likely to rise but make no mistake, these attacks will change France and Europe forever. Like George W. Bush rousing dazed rescue workers and a battered nation from the rubble of 9/11 with the rousing cry “We hear you, the whole world hears you”, French President Francois Hollande, has already laid down the gauntlet from Ground Zero. Speaking symbolically from outside the blood-soaked Bataclan Theatre, the French President has promised “no mercy” and declared a state of emergency. 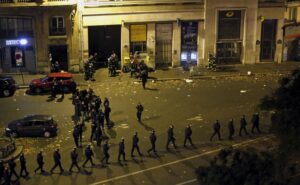 France has for years been at the epicenter of what many see as a clash of civilizations in Europe. The Charlie Hebdo attacks in January 2015, the sensational case in June of the disgruntled ISIS-inspired man who decapitated his employer and then tried to blow up a gas plant in southern France and the August apprehension of an armed Islamic radical who was caught just before a possible attack on a high speed train between Amsterdam and Paris precede this massive assault on Paris.

Now, all political correctness and restraint will be off. As with the United States after 9/11, we are likely to see an all-out offensive on extremism. The French military is already among the most active in striking Isis targets but the real issue in France is of home-grown terror. As many as 1500 French citizens are believed to have travelled to Syria and Iraq to fight as mujahideen for ISIS and many have returned. This attack crosses the Rubicon, to speak, on the internal fault-lines in France because a tough security-centred response is likely to now have full public support.

As a long-time Paris resident, the journalist Simon Kuper, who was at the Stade de France when the explosions occurred, wrote immediately thereafter, “I don’t think this is a clash of civilisations. I see it as a clash of a couple of thousands jihadis with a great city. The problem — as we saw in former Yugoslavia, or in Lebanon — is that it only takes a few men with guns to make a place unlivable.” As he put it, “I fear that fear and danger might become the new normal here.” (Paris witness: Simon Kuper in the Stade de France).

Paris is not just a great city. It is an idea and that idea of Paris is now more under threat than ever before.