What is the connection between a long forgotten US naval battleship that was blown up in the Havana Harbour in 1898 and the state of the post-Mumbai television discourse? Actually, quite a lot. When the USS Maine inexplicably blew up at the height of tensions between Washington and the then Spanish colony of Cuba, the newly emerging American press barons, having just embarked on a contest for readership, as bloodthirsty as the current ratings-war between the Indian TV networks, saw a fantastic opportunity to capture paying readers by rallying them to the flag. Caught in a vicious battle for supremacy with Joseph Pulitzer’s World, William Randolph Hurst’s New York Journal immediately argued that a Spanish mine had taken down the Maine and its 262 sailors. Looking to fuel anti-Spanish hysteria, Hearst dispatched reporters to Cuba to report on alleged Spanish atrocities. When one reporter, finding no evidence, cabled back “there is no war… request to be recalled”, Hearst famously replied: “Please remain. You furnish the pictures, I’ll furnish the war.” Most historians agree that the months of holier-than-thou press jingoism that followed, finally forced the US-Spanish War that would engulf the Philippines, Puerto Rico, the Caribbean, Guam and of course, Cuba.

The state of our satellite television market is roughly analogous to the state of the competitive press market of the 1890s-America and we are seeing a similar propensity for aggression. No longer are journalists meant to simply report facts. There is a new term in the vocabulary of television newsrooms: “aggressive” journalism. The networks, in varying degrees of complicity, are demanding action and forcing the hand of the government. This is not to argue that Pakistan’s hand was not complicit in Mumbai. The point is that any reaction, even a military one, must operate on a calibrated ladder of escalation. We need the cold calculated logic of success, not the self-defeating heat of post-traumatic anger. Remember that even in 1971, the scene of India’s greatest military victory, General Manekshaw took a whole year to prepare his Army, wisely holding up to the political desire to attack when the first flush of refugees became unbearable. Manekshaw was lucky he did not have the pressure of over fifty 24-hour networks keeping a second-to-second countdown to each of his moves. This is a serious national crisis and it demands a serious response. Instead, we are seeing even some of the most creditable networks seriously projecting the option of a first nuclear strike on Pakistan as if we were playing a game of snakes and ladders. Television is a new factor in the Indian social matrix and it demands respect, but it surely needs to grow up and be true to its own self-image, rather than behave like a petulant child.

The independence of news television in this country has been a landmark struggle unparalleled in the history of global news. Many who run the networks now were torchbearers in that iconic struggle against a state bent on treating the audio-visual medium like its private advertising agency. But, with honourable exceptions, just as many of the leading foot soldiers of the freedom struggle against the British turned into power-hungry politicians when they attained power, we are now discovering that many of our TV luminaries do indeed have feet of clay. In a country, where live news on private radio is still banned, television must remember where it came from and be true to its mission.

This is the greatest danger of it all. If the indications from the Ministry of Information and Broadcasting are true, then we are already seeing the first whiff of a counter-reaction. The proposal to provide only edited and pre-censored footage of emergency situations is preposterous — a case of cutting your nose to spite your face. It must be opposed by all those who believe in the institution of the free press and, as expected, television editors have reacted strongly. But this also gives a moment to pause and consider how much of this counter-reaction is a result of their own impetuosity. Surely at a time like this, the lessons of history must inform us and not the weekly tyranny of television ratings.

A short postscript: Revisionist American naval historians concluded by the 1970s that the USS Maine probably sank from internal explosion caused by the combustion of coal kept next to an ammunition magazine. There may be no such smoking gun reprieve for Pakistan in the current case, but we can surely learn from the lessons of the Maine and the discourses that surrounded it.

The writer is the author of ‘India on Television’ 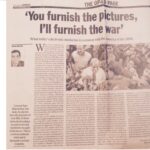