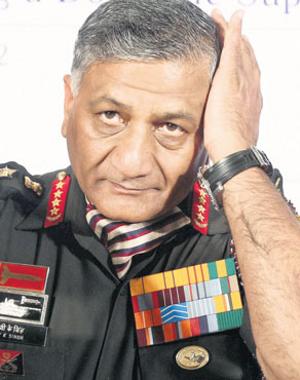 Much has been written about the Shakespearian pantomime of the honest general seething with petty resentments and the honest minister, redolent in repose; both seemingly self-obsessed with their own imagery even as their institutions drift into dangerous waters. Despite recent efforts to cool tempers a little, the byzantine intrigue, the calculated media leaks, the bruising jousts from both sides leave no one in any doubt about the state of war within the Ministry of Defence, somewhat like a medieval court where intrigue plays at every turn and fortunes rise and fall every day depending on what is whispered in whose ears.

What began as a curious dispute over a birthday that could have been resolved over a cup of tea and some gracefulness turned first into an unprecedented civilian-military dispute and now eventually into a disturbing war within the Army itself, with aspersions being cast on not only on retired but serving officers by a sitting Army chief.

In the past, bitter civilian-military disputes like the one between General Thimayya and Krishna Menon were fought behind closed doors; General Rodrigues famously called foreign powers ‘bandicoots’ and asked for ‘good governance’ but then backed down when criticised in Parliament.

The current dispute though is of a totally different order. The timing of the Army Chief’s actions has raised more questions than answers. Even if the issues he has raised are serious, there is no doubt that the Army’s image and its reputation has been a casualty in this crossfire.

Irrespective of whichever side you are on, everyone agrees that this is a royal mess? Can there be an opportunity in this?

Yes, if the government and the prime minister are imaginative. At a deeper level, going beyond the personalities the current malaise is a symptom of the larger problem of higher defence management in India and a proactive Prime Minister would use this crisis to seize the initiative and take some bold measures.

First, the lack of integration between the service headquarters and the Ministry of Defence has for years led to what the analyst Anit Mukherjee has called an “absent dialogue” between the civilian bureaucracy and the military leadership. The constant downward gradation of the defence services in the official hierarchy of post-independence India, the military elite’s seething fury over civilian control translating into what it sees as bureaucratic control, the dispute over disparities in the Sixth Pay Commission and the existence of parallel systems in the Ministry of Defence, where a file first goes through the service headquarters and then has to start from scratch again from the lowest echelons in the Ministry has always led to a disconnect. At a deeper level, this sense of alienation, an Army and bureaucratic cadre that in many cases see each other as adversaries, combined with a political elite that does not really understand defence issues has meant a recipe for serious disjunction.

The creation of an integrated defence headquarters has been mooted, by some accounts, at least since the days of VP Singh and the still-secret report of the Committee on Defence Expenditure, headed by Arun Singh. From the Kargil Review Committee to the task force on defence appointed by Prime Minister Vajpayee, led again by Arun Singh, every review exercise in the past three decades has basically called for urgent reforms converging on integration, the end of parallel systems and changes in the way the defence services are run. Yet, the pace of change has been glacial. The Naresh Chandra-led task force appointed last year to review higher defence management may be near completing its work now and this should be an opportunity to significantly reform an ossified system.

Second, much of the weaponry with the Army is weaponry that was bought during Rajiv Gandhi’s time or before. The Army, predominantly configured to fight WWII-style battles, has been struggling with reform. For example, the Air Force and the Navy will be spending much more on modernisation in the 2012-13 budget, while the Army’s capital expenditure spending is roughly half of these two services.

Despite the impressive increases in India’s defence spending and recent changes in defence procurement system, all serious analysts agree that we have a serious problem. The ghost of Bofors still haunts defence acquisitions which take unusually long in India, with even vague complaints leading to blacklisting of companies. Defence deals must be transparent but if virtually every vendor is blacklisted on mere suspicion and indigenous industry is simply not up to the mark, where will you get new weapons from?

Keeping personal issues aside, the crisis of General Singh should be the trigger for implementing much-needed reforms and a much more proactive leadership of the Defence Ministry. It should be turned into an opportunity to cut through systemic resistance and inaction. The question: is UPA-2 up to it?