Give them their due

HomePolitics & Current AffairsGive them their due

The hero of the Bangladesh war, Lt Gen J F R Jacob, once commented, only partly in jest, that today’s generals do not even enjoy half the authority that he had once enjoyed as a major. The general should know, having served as an army commander and much later as a governor of Punjab and Goa. At one level, his comment was a compliment to the world’s largest democracy, one of the few post-colonial countries not to have suffered from the ignominy of a military coup. At another level it pointed to the deep well of discontent brewing within the defence forces over perceived slights by what the forces see as an uncaring and overbearing civilian bureaucracy. That wellspring of discontent is now simmering and the heavens seem to have fallen because of the service chiefs’ initial reluctance to accept the recommendations of the 6th Pay Commission.

We are being told that never before has a cabinet decision been so defied by sitting chiefs, that this is the incipient beginning of a “revolt” and that the civilian bureaucracy will ultimately hit back and grind the military chiefs further into the dust. Much of the ongoing debate hinges around one single factor: the supposed breakdown of civil-military relations. There is an argument that the manner in which the service chiefs
orchestrated their protest was not befitting their status; that they could have registered their protests more unobtrusively and avoided a public stand-off.

The major issue here is about the form, not the substance of the service chiefs’ objections. There is virtually no public voice against the demands raised by the defence forces, all of which are essentially rooted in a basic desire for greater status and yes, greater money.

This is why defence minister A K Antony has supported the chiefs: not because he is weak, but because he senses that at the core of these demands is the bursting out of decades of frustration at being treated as dispensable by the babus.

The key issue here is whether the chiefs have upset the balance of civil-military relations. Let us be clear. At a time when India is taking its due seat at the global high table, it remains one of the few leading powers in the world where civilian authority has come to mean a continuing divorce of the defence services from higher policy-making. Far from being a challenge to civilian authority, the chiefs’ representation to the defence minister is, in fact, a reiteration of the principle of civilian control. Disagreement does not automatically translate into an open revolt.

Do we expect our chiefs to quietly sign on every dotted line, irrespective of the wisdom of doing so? By that logic, Field Marshal Sam Manekshaw who wisely opposed Indira Gandhi’s plans for an immediate invasion of East Pakistan in early 1971 to give his army enough time to prepare was equally wrong. But do we not hail the late field marshal for staying firm in his resolve?

The fact is that the defence forces remain the only true Indian institution that has been relatively immune from
politicisation and institutionalised corruption of the kind that has come to be associated with the other
pillars of the state. This is why at times of dire crisis, from the televised rescue of Prince to the worst communal riots in Gujarat, it is always to the men in olive green that we turn. Given this scenario, it is unfortunate that successive pay commissions have regularly downgraded the men and women in uniform. The fight is about status, not about money.

It is also about operational efficiency. It is officers up to the rank of colonel who provide the army with its fighting teeth and it is here that the Pay Commission has hit hardest.

At times of crises, how do we expect lieutenant colonels to lead smooth joint operations with once subordinate civilian authorities who have suddenly been elevated in the order of precedence? This is a disaster in the making and the foreboding in the rank and file of the forces must not be underestimated. This is particularly important because of the immense dissatisfaction caused by the previous two pay commissions as well, the most public manifestation being the ugly protests by sections of the air force last time around.

The wiser route for the government after that would have been to take corrective action or to put a services representative on the pay panel.

Neither was done and the chiefs are now only responding to the aspirations of the rank and file. They are as much responsible to them as they are to the supreme commander and their articulation of the pay commission grievances should be seen in this light.

In 1986, Lt Gen M L Chibber had written a perceptive account of problems with the civil-military equation in
India. Twenty years later, it is even clearer that India is far too large and complex a country for any kind of coordinated or sustained military challenge to the civilian authority. This is why the service chiefs’ response to the pay commission should be read not as an act of defiance, but one of despair. The changes demanded in the pay commission are not about strengthening civilian control – that is not even in question – but about bureaucratic churlishness and about giving the armed forces their due.

The writer is a Delhi-based political commentator. 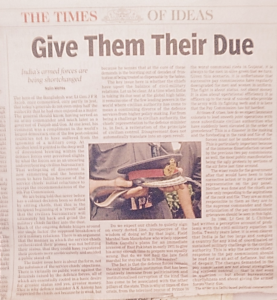