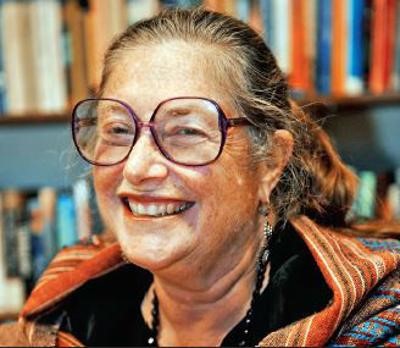 Indologist Wendy Doniger is the author of seminal books on Hinduism and mythology. She tells Nalin Mehta that protests by writers can be effective, book bans don’t work and that Hinduism’s great tradition of debate is alive and well.

Do you agree with the writers and film-makers who returned their awards to protest against rising intolerance in India? As someone whose book was withdrawn under a Congress government, do you think this is actually the case?
Well, of course, my book was not banned, under any government; a lawsuit was brought by a group of private individuals against me and my publisher, and the publisher agreed to stop publishing the book in India. In fact, the book, the Hindus: An Alternative History, has now been republished by another publisher and is freely available. This seems to me to mean that protests really can be effective; the international protest against Penguin’s action in withdrawing the book was inspiring, and ultimately bore fruit. So, too, I believe that the writers’ and filmmakers’ protests have rallied many of India’s intellectuals to stand up against the rising intolerance of dissident views.

Do book-bans ever work?
I don’t know if it’s possible to generalize; some banned books may indeed have disappeared. But I can speak with confidence about my own case: the publicity generated by the attempt to keep it out of print made it a best seller, always available both in paper copies (in brown paper wrappers) and in (illegal) PDFs, and now again in a new paperback edition.

Are Hinduism’s traditions of samvaad under increasing threat?
This is the real danger, I think. The open-mindedness and tolerance that has been the pride of India for centuries is seriously threatened by the legal actions and physical violence that have been directed against individuals whose words and actions were unacceptable to a narrow and narrow-minded band of Hindutva adherents. But recent developments give me new hope that the great Indian tradition of debate is alive and well. First the return of the awards by writers and film-makers, and now the emergence of a group of 46 scholars, Indian historians, who have announced their determination to engage in serious discussions about historiography with what they characterize as the “leftist” school of Indian history.
I would love to be a part of such a serious discussion about genuine issues, a welcome change from the irresponsible and unscholarly attacks that those who oppose Hindutva historiography have been subjected to in the past. I see this as real progress toward a genuine intellectual encounter and I welcome it.

Do you think the traditions of dissent and debate inherent within Hinduism are essentially inimical to Hindutva?
I certainly do. Hindutva insists on a single, monolithic, unified Hinduism, and does not tolerate any vision or discussion of Hinduism that includes other aspects of the culture. There can therefore be no debate within Hindutva, since there is only one acceptable argument. Such a view by definition excludes most of Hinduism, including the interaction of contrasting views. An important example is the recent persecution of people-primarily but not only Muslims-who eat beef. The Hindutva assumption is that no Hindus eat beef, whereas in reality some Hindus do and other Hindus do not – the issue of beef, and cows, has a complex and tricky history in India. I was recently misquoted on this subject by a professor who claimed, on the basis of remarks that he says he overheard at an academic dinner party in my honor, that I believed that Partition might have been averted had Gandhi not been so reverent to cows. This is of course nonsense, and not what I was saying; the situation is far more complex than that. But Gandhi was indeed a supporter of the Cow Protection Society, despite rather than because of the anti-Muslim agendas that it had then and still has now. And those agendas contributed to the ultimate failure of his sincere efforts to work with Jinnah to integrate Muslims and Hindus and to avoid Partition. Complexities of this sort, which require an open mind and a sophisticated understanding of history, are simply ignored by advocates of Hindutva. The idea of samvaada is negotiation and nuance, which are destroyed by reductionist caricatures of anyone’s views.

Your latest book, ‘The Mare’s Trap’ extols the Kamasutra as a landmark of Sanskrit secular literature. Why do you think so?
The Kamasutra is certainly one of the earliest and most enduring Indian texts of a secular nature. Its scientific attitude to debate in general, and debate about the life of a cultivated urban-dweller in particular, is a model of scholarly writing. Argument is an intrinsic part of it; major points are debated, pro and con, until the author states what he thinks is the best view. The Kamasutra ignores caste entirely, and its attitude toward women is stunningly liberated, ignoring many of the more restrictive attitudes of traditional dharma. It is an amazingly modern book.