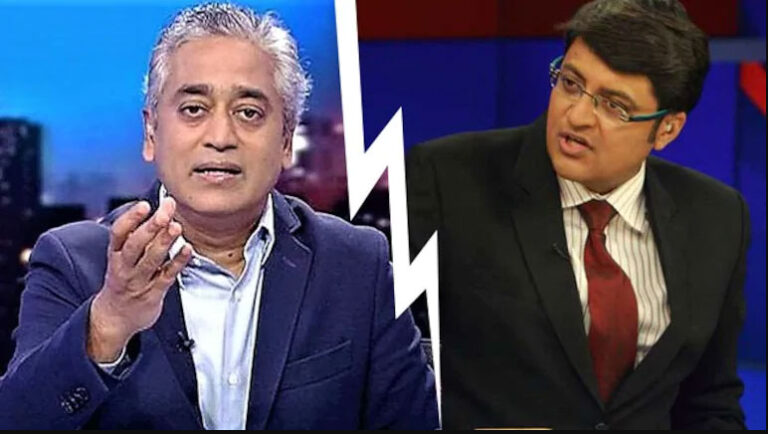 Senior journalists Rajdeep Sardesai and Arnab Goswami used to be colleagues years ago. This morning, Sardesai demolished his former colleague’s lie about covering the Gujarat riots of 2002 and Twitter had a field day.

Rajdeep Sardesai, Consulting Editor of India Today Television and Arnab Goswami, Editor-in-Chief of Republic TV, used to be colleagues years ago, while working with NDTV.

This morning, Rajdeep Sardesai, who has 7.23 million followers on Twitter, called out his former colleague’s lie in two tweets. Tweeting with a link of a YouTube video with the title “Arnab Goswami talking on Gujarat Riot (sic)”, Sardesai said, “Wow! My friend Arnab claims his car attacked next to CM Res in Guj riots! Truth:he wasn’t covering Ahmedabad riots!!”

In a subsequent tweet, Sardesai shared the same YouTube link again and said, “Fekugiri has its limits, but seeing this, I feel sorry for my profession.”

In a subsequent tweet, Sardesai shared the same YouTube link again and said, “Fekugiri has its limits, but seeing this, I feel sorry for my profession.”

Fekugiri has its limits, but seeing this, I feel sorry for my profession. https://t.co/xOe7zY8rCp

“2002. And we came out 50 meters from his residence, we are stopped, suddenly our ambassador car is stopped and there are people who are breaking the windows with “trishuls”. All the windows are broken. It is almost as if there are trishuls all around. I know it’s very unsavoury, but I must share with you the reality of life as I’ve seen it. When that happens, we are all told to reveal our religion. It is 50 metres from the chief minister’s house. How it happened, I don’t know. We said we are journalists. “No, No, what is your religion? What is your religion?”. And, thankfully, let me tell you, there was nobody from the minority community with us. But one of our people; we had our identity cards, press cards. My driver did not have a press card. And I look at… I was sitting in the front [of the car]. I’ve an obsession of sitting in the front seat; I looked to my right and I can see the look on my driver’s face. When people talk about secularism, I’ve seen hate from up close and I know that group of people could have killed him. He had a tattoo. He put up a “Hey Ram” or something on his… it is not a tattoo, it is just an imprint that you put which stays with you. He showed that and we walked out. But I saw for that moment how scared you…”

Nalin Mehta and Sanjeev Singh, two senior journalists who used to work with Sardesai and who were on the ground with him to report Gujarat riots, testified that Arnab is lying.

Amazing: becos actually this incident happened with @sardesairajdeep in Guj riots. We know cos we were there @sanjeevrsingh https://t.co/HwHyl3Peqh

The incident was real. But it did not happen with Arnab Goswami but with Sardesai himself. Another twitter user tweeted to Sardesai saying, “If i am not mistaken it was you and pranav whose car was stopped? (sic)”, to which he replied saying, “That is correct. And Narendra Gudavalli”.

In another tweet, replying to a user who said he remembers how Rajdeep was gheraoed, Sardesai got into specifics like where the incident actually happened.

Incident was in Gandhinagar Sarkhej highway, few kilometres away from Cm residence. https://t.co/38AmVPeP3j