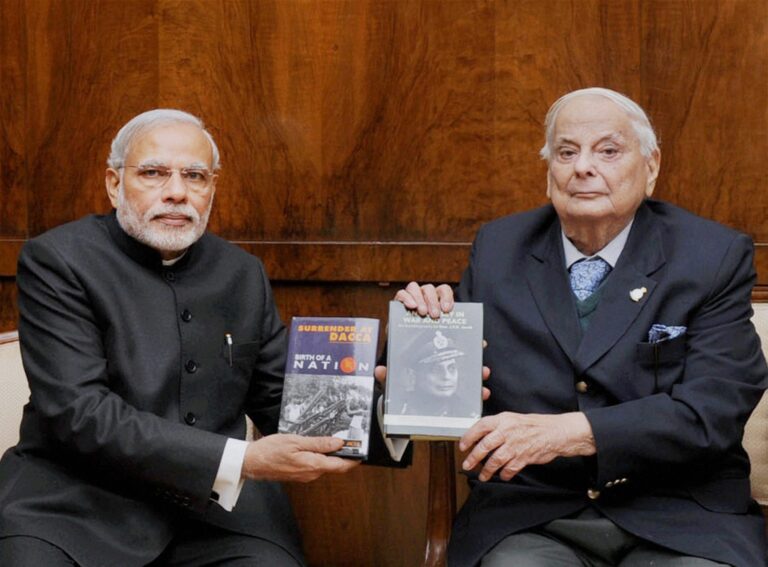 It must count as one of the most memorable messages ever to finish a war. As he entered Dhaka on the morning of 16 December 1971, Major General Gandharv Nagra sent his ADC with the adjutant of the 2nd Paras, the first Indian battalion to have reached the city, to the Cantonment with a truce flag and a message for the Pakistani general, AK Niazi: “My dear Abdullah, I am here. The game is up. I suggest you give yourself up to me and I will look after you.” Nagra had known Niazi from his days as a military advisor to the Indian High Commission in Karachi and on that December morning in Dhaka the game was indeed up.

At 4.31 pm that evening, Niazi publicly surrendered to the Indian Army with 93,000 Pakistani troops; the two-nation theory was, once and for all, discredited; Pakistan was cut into two and the birth of a new Bangla nation had been mid-wifed.

Lt. General Jacob Farj Rafael Jacob, who passed away on 13 January, not only designed the military strategy that drove the Indian Army’s lightening thrust into Dhaka, he also personally negotiated Niazi’s public surrender.

First, capturing Dhaka itself was not an official war objective for the Indian Army in 1971. As the Army prepared for war, Operation Instruction 53, issued by Army Headquarters on August 16, 1971, mandated Indian forces in the Eastern Sector to destroy Pakistani forces in Eastern Sector and to occupy the major portion of East Bengal including the entry ports of Chittagong and Chalna-Khulna. (The drive to Dhaka whose idea was it?)

The idea was to win and hold territory in a short war and then negotiate a favourable ceasefire. Conquering Dhaka was considered an option at the planning stage but Army Headquarters never made it a formal war aim because it also had to worry about a possible Chinese threat from the north, the threat to Bhutan, the continuing insurgency in the North-East and possible American intervention.

Jacob, then a major general and chief of staff in Eastern Command, however, had been pushing for a thrust to Dhaka since May. His plan was to bypass major populated towns heavily fortified by Pakistan and to go straight for the East Pakistani capital. In his last book, An Odyssey in War and Peace, he describes a heated war planning meeting where he pushed his point but Army chief Sam Manekshaw told him, “Jake sweetie, don’t you see that if take Khulna and Chittagong, Dacca will automatically fall.” Manekshaw eventually ended the meeting putting his arm around Jacob, saying “Jake, I am relying on you.” (JFR Jacob’s memoir: How India won the 1971 war against Pakistan)

Jacob didn’t give up and the internal military debate continued right till the beginning of the war. Eventually by November 30, Army Headquarters issued revised orders, mandating “the liberation of the whole of Bangladesh as the military task of Eastern Command.” Lt General Jagjit Singh Aurora, the Eastern Army commander, had made it clear that his strategy would be fluid and after the Army made fast early advances in battle, the plan for a lightening strike to Dhaka now looked good – though formal orders for this were never issued.

It was eventually possible only because of Jacob’s advance planning and chutzpah, combined with Manekshaw’s steady hand at the top and the initiative of field commanders like Lt. Gen. Sagat Singh and Major General Nagra (See here).

On the morning of 16 December, when Indian troops reached Dhaka, Manekshaw called Jacob and told him “go, get the surrender.”

Jacob flew into Dhaka unarmed and gave Niazi the draft surrender document that he had drafted.
Niazi still had 30,000 troops in Dhaka, only 3,000 Indian troops had reached there by then and the Pakistanis could have fought on “another three weeks” by Jacob’s reckoning.

Jacob, though, told Niazi that he had only “30 minutes” to decide. After that, he said, “he could take no responsibility for what happened to you or your families.” Then, he walked out of the room, and waited “calmly puffing his pipe pacing up and down” – as Bangladesh’s Hamoodur Rahman report later reported.

Thirty minutes later, he walked back in and asked Niazi, “General, do you accept this paper” The Pakistani general did not respond, so Jacob repeated his question thrice.
So Jacob simply picked up the surrender document and said, “”I take it that it is accepted.” (How Pakistan surrendered in 1971)

And that was how the man Manekshaw called “Jake sweetie” conquered Dhaka for India.

Farewell, general. They don’t make them like you anymore.