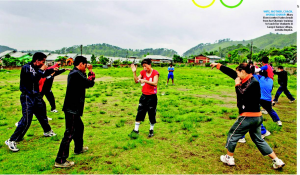 The foundation was laid at the Commonwealth Games in Delhi in October 2010. With 101 medals, 38 of which were gold, and second place on the medals table displacing England for the first time in history, Indian Olympic sports made a statement to the world. Critics, however, attributed this to the relatively lower level of competition at the Commonwealth Games and suggested that the real test was the Asian Games at Guangzhou, China in November 2010. And as India’s shooters achieved only modest success at the Asian Games, the murmurs began gathering strength. After the first week at Guanghzhou, the CWG looked to be a false dawn. The national ritual of celebrating failure was about to start and coupled with the CWG scams, which were then hogging all of the media limelight, Indian Olympic sport was staring down the barrel.

But as with any sport, conclusions shouldn’t be drawn till the last medal is actually won. India, which had one gold medal from Pankaj Advani in snooker to show at the end of the first week of competition at the Asian Games, suddenly came alive on November 21, 2010 to claim three more. Ranjan Sodhi, one of India’s best medal prospects at London, was on target in men’s double trap and Preeja Sreedharan and Sudha Singh gave millions of Indian sports fans reasons to celebrate as they raced to gold in the 10, 000 metres and 3000 metres steeplechase. Suddenly the Doha 2006 haul of ten gold medals looked achievable and with the boxers putting up a stunning show, their best ever at the Asian Games, the CWG success did not look like a one-off event.

Just as in the Commonwealth Games, where Saina Nehwal’s gold in badminton, India’s 38th and last, was more than a medal, at Guangzhou Vijender Singh’s gold, India’s 14th, shone brighter than its colour. Achieved with a broken thumb in the 75 kg category in boxing, it propelled India to an unprecedented sixth place in the medal standings and summed up the story of India’s athletes, fighting on despite administrative apathy and bureaucratic red tape at every step. London 2012, it is hoped, will allow these athletes to occupy centre stage and herald the start of a systemic overhaul in Indian sports that the nation is badly in need of and has been craving for years.

If the Asian Games was any indication, India, for the first time ever, can realistically expect seven or eight medals at London 2012, more than double of what the country won at Beijing. And for the first time, the world media was forced to publish headlines such as “China and India up, Japan down” in summing up Asian Games performances in November 2010.

What should help in marketing these athletes further is the fact that their achievements in Delhi and China were analysed for hours on television, which turned them into national celebrities. That there is a perceptible shift is evident from the coverage in the media, the harbingers of change. In March-April 2009, the leading lights of world badminton were in India to participate in the Indian Open tournament in Hyderabad. Around the same time, the Indian cricket team was playing New Zealand in a bilateral series in New Zealand. Even on the day of the Indian Open finals, coverage of the competition was relegated to the lower half of most sports pages across the country while items about India’s preparation for the third Test of the series in New Zealand were given eight-column banner headlines. This was startling because India now has a handful of players who have made it to the top 25 in world badminton. Saina Nehwal, India’s best bet for a medal at the Olympics and ranked fifth in the world, trailed off with the following lament: “A lot of cricket is happening … nobody wants to take it (badminton) up professionally. It is not easy to be ranked number eight or nine. A lot of sacrifices have to be made and still not many are ready to do that. So maybe once in ten years we will have a Saina Nehwal. ”

In a glaring departure from the reality described above, every Indian achievement at Delhi, and subsequently at Guangzhou, made page one headlines, while India’s cricket triumphs against Australia and New Zealand were relegated to the sports pages of the national dailies. A successful London 2012 and a sports culture will no longer be an illusion with India gradually starting to look beyond cricket and turning into a multi-sport nation.

THE MAKING OF A NATIONAL AUDIENCE

CWG 2010 was an important pit stop in the journey of Indian sport. It was proof that Beijing 2008 was no flash-inthe-pan. Abhinav Bindra, India’s lone individual gold medallist at the Olympics, was only one of many worldclass Indian shooters who have emerged in the past decade.

Besides the shooters, India has a number of boxers capable of winning medals at London. As the boxers felled their more famous opponents at Guangzhou, a national television audience, led on by a cheerleading media, focussed on Olympic sports for only the second time after Beijing 2008. The fact that the entire boxing team had emerged from either the small North Indian town of Bhiwani or from India’s insurgency-ridden North East provided an irresistible story of human triumph against great odds.

While Bhiwani and boxing are at the centre of national attention in the lead-up to London, it is important to remember that only a sustained effort at building infrastructure will ensure that CWG 2010 and Guangzhou aren’t exceptions. Bhiwani continues to be a town which goes for days without electricity, where the rains have made it impossible to drive a car faster than five km/hour on most roads and where residents have to rely on inverters to watch their boys win bouts. In such a setting, sport has emerged as a way out for many. The real success of Bhiwani lies in the rock-solid confidence of the new generation of boxers and a nascent public-private partnership which allowed them to transcend a system long geared to churning out mediocrity. They have not been content to merely repeat the past. This is the new Indian spirit that needs to be celebrated.

The picture is similar if we turn our gaze to shooting, India’s favourite medal event since Bindra’s gold at Beijing. While Gagan Narang, Bindra’s compatriot in the 10-metre air rifle, has been in sizzling form since the 2008 Olympics and has even broken multiple world marks, his performances are once again the result of individual flair and brilliance. The fact that Narang could win four gold medals and two silvers at the Commonwealth Games and Asian Games respectively is testament to his skill and mental strength. While Narang’s exploits give us ample hope before the London Games, a shocking exposê in April 2009 highlighted the fact that the 15 top coaches engaged in training India’s shooters for the Commonwealth Games weren’t paid between January and March 2009 when each of them was entitled to payments of up to Rs 30, 000 per month as per the terms of their contract.

With just a month left for London, India still doesn’t have a top-level pistol coach and some of the nation’s leading shooters are trying to circumnavigate the problem by making use of the facilities at Gagan Narang’s academy in Pune.

These discrepancies, born out of insurmountable administrative apathy at the highest levels of Indian sport, only add to the despondence of India’s sportsmen and women. Sports administrators often resort to blaming the media. However, that such a situation has been created in the first place speaks volumes of their efficiency. Unfortunately, in India, virtually every sporting body is controlled by a politician or a bureaucrat. And once entrenched, most manage to stay on for years.

For the first time, under Ajay Maken and Sindhushree Khullar (former secretary, sports, and now secretary of the Planning Commission), the sports ministry sent out a circular to all sports federations to send details of past and recent performances of all ‘core group’ athletes. This directive came on the heels of growing discord among sportspersons who felt that despite giving their best performance, they weren’t being rewarded in the absence of proper laws and guidelines. Reacting against the groundswell of discontent, a ministry official emphasised that the directive was meant to weed out non-performers and encourage sportsmen and women to excel in international competitions.

A more proactive sports policy can be traced back to 2009, when, for the first time ever in India’s sporting history, the government came forward with a grant of Rs 678 crores to enable our athletes to train abroad with the world’s leading professionals.

This was to ensure that they were exposed to the best facilities before the 2010 Commonwealth Games and London 2012.

While more money for sport is always welcome, the problem lies in the details and in how it is spent. One statistic is telling. Against an allocation of Rs 678 crores for the Commonwealth Games, the government had spent just over 35 per cent, only Rs 232.

19 crores by November 2009. If the idea of pumping in this money was to create champions for the Commonwealth Games, to use them as a springboard for greater sporting glory at London, then clearly something went terribly wrong. Unless there is serious organisational learning, and unless there is a realisation that London 2012 is India’s last opportunity at becoming a sporting nation, it is impossible to expect radical change in the existing scenario. London 2012 is a potential game changer and this realisation is crucial to heralding a fundamental transformation in the country’s sporting scene.

Talking about the possibility of a sporting resurgence, the IOA secretary general Randhir Singh suggested that individual prodigies aside, the connection between modern sport and commerce is undeniable. This is precisely why nascent private sector initiatives like the Mittal Champions Trust and Olympic Gold Quest, non-governmental organisations formed to stimulate sporting excellence, are greatly required.

That Olympic Gold Quest is clearly focussed on the job at hand is evident from the following comment by CEO Viren Rasquinha, “We are committed to providing our athletes with the best of facilities. We will ensure that they are best prepared when they compete at the Games. No one can guarantee a medal but we can surely guarantee perfect preparation. That’s what we are aiming to provide for our athletes. ”

Come August 2012 and the CWG legacy will be put to its sternest test. If India can double its medal count achieved at the 2008 Beijing Games, it will give an unprecedented fillip to Indian Olympic sports. A failed effort at London, on the other hand, organisationally and with regard to medals won, will mean that the lush promise of CWG and Asian Games 2010 will be confined to the pages of history books by the time the next Olympics are held at Rio de Janeiro in 2016.

London then, it is time to accept, is going to be a watershed event in the history of Indian sport. A successful Olympics will propel India to the forefront of Asian sport and may even translate into an Olympic bid a decade down the line. A failed Games experience, on the other hand, might lead to Olympic sports taking a huge backward step, and the country losing all that momentum built-up after the Delhi CWG and the Asian Games at Guangzhou.