Nalin Mehta
Articles On Me

Mehta’s ‘Behind a Billion Screens’ features in New York Times

Nalin Mehta’s recently released book ‘Behind a Billion Screens: What Television Tells Us About Modern India’ is receiving rave reviews from around the world. The New York Times devoted an entire column to the book, where the novelist Manu Joseph noted that “Mr. Mehta’s book portrays a host of problems facing Indian television” and the link between media and the Indian democracy. Leading magazines and newspapers like Mint, Outlook, Business World, Scroll, Yahoo etc. have also carried long extracts and stories about the book that focuses on the wider social meaning of television and how it reflects the broader Indian story.

Introducing the book and the author Uday Shankar, CEO Star India says, “Nalin is probably the best media academic in India and this book is a seminal contribution to the debate about the role of the Indian media”. The book was released on May 8, 2015 at a power-packed launch function in Delhi. Jawahar Sircar, CEO of Prasar Bharti, Rajdeep Sardesai, Consulting Editor India Today Group were panelists for the event, moderated by Vanita Kohli-Khandekar, author and Consulting Editor, Business Standard, were the panelists for the event. Mr. Sardesai said, “Indian television is dead and this book is it obituary”, a view that Mr. Sircar strongly denied stating that the Doordarshan is still relevant. 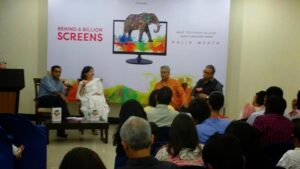