MISSING OUT ON A COMMON GOAL

Long before he became a politician, Suresh Kalmadi was an Air Force pilot. Among his favourite memories, he has said in the past, was landing planes in Leh when there were no proper runways. The big question now is can he deliver the Commonwealth Games with what looks like poorly finished stadiums? Responding to such queries in the past, Mr. Kalmadi has always been gung-ho, insisting, “We will be fully prepared.” But as the August 1 deadline to hand over the stadiums to the Games Organizing Committee approaches, it is clear that much of the work remains unfinished.

How did we get here? At its heart, the story of the Commonwealth Games has been a morality tale about different ideas of India: the India we want to be and the one we thought we had left behind.

Shashi Tharoor may not be in fashion any more but he once penned a lovely allegory on modern Indian politics in his The Great Indian Novel, observing that India is not “an underdeveloped country” but “a highly developed one in an advanced state of decay”. This phrase captured the overwhelming despair and shabbiness that had come to characterise the worst excesses of the license permit raj.

The rise of the Azim Premjis and Narayan Murthys in the 1990s shattered that grand narrative of fallen greatness, ushering in a new era of self-belief. This is an India that is fast emerging as one of the new pillars of the world economy; one that gives billions of dollars to the IMF in return for a greater say on the global high table; and one that has the chutzpah to create a Nano. India unquestionably has the talent and the ability, yet it seems to have made such a mess of the Commonwealth Games.

As always, in India, opposites co-exist. Just as the Naxals and their voiceless excluded multitudes continually remind us of our dark underbelly threatening to engulf the shining lights of Manmohan Singh’s brave new India, so do shibboleths from the past co-exist with the promise of a brighter tomorrow. The story of the Commonwealth Games so far is a case in point.

To begin with, Delhi got off the starting blocks rather late. The planning for the Beijing 2008 Olympics and upcoming 2012 Games in London, for instance, followed a seven-year time cycle: two years for planning and approvals, four years for construction and development, and the last year for test events and trial runs. In the case of Delhi, though, the first few years were utterly wasted.

As per the contract with the Commonwealth Games Federation, Delhi’s Organising Committee was to be in place by May 2004, but it was not formed until as late as February 2005. This rendered most of the original timelines redundant. Delhi’s bid document had four phases: 2004-2006 for planning, 2006-2008 for creating, 2008-2010 for delivering and 2010-2011 for concluding.

A report by the Comptroller and Auditor General of India (CAG) on the Games found “no evidence of the four-phase approach being translated into action during the first phase years of 2004 to 2006.” Planning only really commenced from late-2006, much of the construction only later.

Twenty-one major organisations and agencies were involved, each with different roles, budgets and reporting lines. As the CAG pointed out in 2009, “Many agencies were either unaware of their role or refuted the role expected of them.” Many even had different timelines for the same project. Even though the government set up a Core Group of Ministers to coordinate the work, in practise pulling together so many moving parts proved to be a bureaucratic quagmire with as many as 22 sub-committees.

The PMO was involved at sporadic intervals, but one gets the overwhelming impression that the entire impetus lacked a strong centre of the kind that Rajiv Gandhi gave to the Asian 1982 Games. In 1982, the prime minister’s young son, cutting his political teeth, had spearheaded the effort, giving the Buta Singh-led organising committee a focused coherence from the highest level. 2010 seems to have lacked such a concentrated direction until the Sports Ministry began taking charge in 2009.

The big question now is: will Shera fly? Will the tiger mascot of the Games be remembered fondly like the Appu – the tubby elephant mascot of the 1982 Asian Games – or will it go into the dustbin of India’s collective consciousness? Put simply, can India still pull it off?

(The author has co-written, with Boria Majumdar, a book on the politics of the Commonwealth Games, which will be published in August this year) 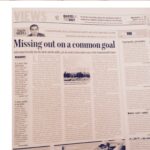