Modi was like Schwarzenegger to many looking for a muscular leader: Sardesai 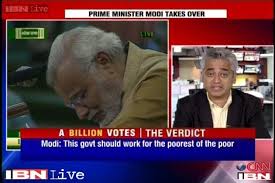 Rajdeep Sardesai is a senior journalist and author of 2014: The Election That Changed India. Speaking with Nalin Mehta, Sardesai discussed how Narendra Modi reconfigured the election discourse, how he ran an Obama-like campaign — and how Rahul Gandhi got it so wrong:

Analyse Modi’s transformation from Hriday Samrat to development icon?
When you think of media coverage in 2002-03 and the epithets hurled at Modi, and compare it to coverage of Modi in 2013-14, Modi has clearly been able to transform himself.

It was deliberate, strategic and brilliantly executed because he realised that in 2014, if he had to win the election, he could not be seen purely as a Hindu Hriday Samrat.

How true are charges of an anti-Modi bias against the English-language press?
Modi has been successful in portraying himself as a victim of English media — but look at the same media’s coverage in 2013-14. Media which was critical of Modi is today euphoric about him.
Modi’s evolved — media’s also evolved. A lot of us have seen him only unidimensionally. We tended to see him through the prism of authoritarianism, of 2002, and thereby perhaps failed to see him as a new kind of leader. We did not know as media persons characteristics that make him such a successful CEO.

What surprised you most about Modi in 2014′s campaign?
I was remarkably impressed by how Modi dealt with young people. He is deeply insecure about peers and finds it difficult to get along with them or those elder to him in the party, like the Advanis and Joshis.

But with young people, Modi has a great ability to identify the right person for the right job and empower them.

What made Modi rise above other BJP leaders?
When the country was burdened with negativity, Modi exuded a certain aggressive positivity that set him apart. Delhi leadership of BJP is seen as part of the same old coterie and cabal politics. Modi was almost like an Arnold Schwarzenegger to many when the country was looking for a muscular leader.
Modi was like Reagan in the 1980s with his ‘Good Morning America’ — he was offering hope.

How much did Congress’s disarray help?
It was crazy to see how badly Congress ran its campaign. You had Congress running a listless, hapless campaign — while Modi ran a campaign even more impressive than Obama.

Obama did it in a less diverse society than India. Modi converted BJP into an electable party, like Labour under Tony Blair — an enormous achievement.

Did this election prove Rahul Gandhi is a dud?
Rahul Gandhi has clearly failed to rise to the occasion so far. There’s no evidence he’s been able to successfully launch a mass mobilisation programme or shown real leadership skills.

Rahul Gandhi has only two options — either he shapes up or steps aside and appoints an empowered CEO. He’s got another 12 months at best.

Should Priyanka Gandhi step in?
If Congress believes replacing Rahul with Priyanka is the solution, it’s mistaken.

We are a country where people like to see self-made leaders. Replacing Rahul with Priyanka is not going to solve Congress’s crisis.