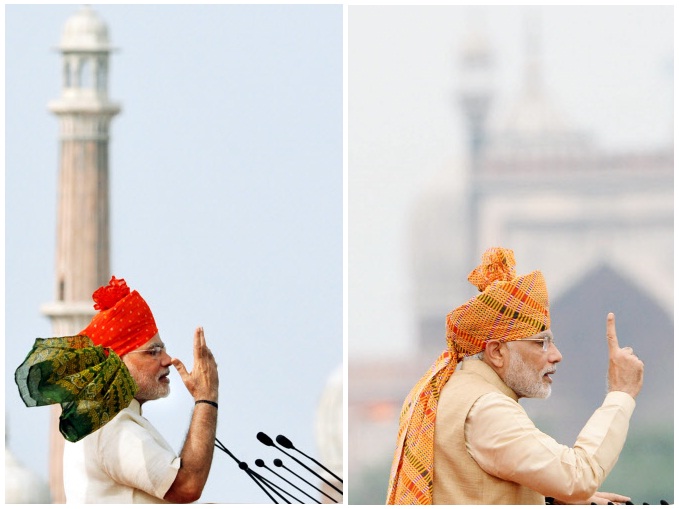 The colour of the Prime Minister’s turban at the Red Fort had changed — from red in 2014 to mustard-yellow in 2015. So had the context. In 2014, Narendra Modi was the grand new hope of India, speaking like an outsider bringing new energy to the decaying pillars of power. Now, after a year and a half in power, the man who made his political reputation as India’s greatest public speaker tried hard to rekindle the same magic in his oratory but couldn’t come out with any new ideas.

The buzzwords so dear to the Prime Minister were all there — “Team India”, “start-up India”, “stand up India”, “vikas ka pyramid” (pyramid of development) — but his second independence speech, unlike his bold and path-breaking first one, was essentially a reiteration of the promises he made a year ago, a listing of some of the advances made on these and a dismissive parrying away of some of the political hot-potatoes facing his government.

For many, this was the hope of 2014 coming face-to-face with the realities of 2015, the optimism of 2014 giving way to new clouds of cynicism.

An entire Parliament session has gone down the drain on charges against external affairs minister Sushma Swaraj and Rajasthan chief minister Vasundhara Raje Scindia of helping former IPL czar Lalit Modi but the Prime Minister insisted that there is no charge of corruption against his government. He is well within his rights to defend his ministers but to say that there is no charge is incredible.

A day after the nation was shocked with images of police action on protesting ex-soldiers agitating for One-Rank-One-Pension at Jantar Mantar the PM could only give an assurance in principle, arguing that discussions were still on. It bitterly disappointed veterans thronging Jantar Mantar, who immediately rejected the offer.
As one emotional former soldier told TV channels immediately after the speech, “Why didn’t we get a time frame? Give us a deadline for implementation and we will call off the agitation immediately. We reject this assurance completely. We don’t understand it. Are we not part of Team India?” After all, 10 months ago, on 24 October 2014, the PM had declared before soldiers in Siachen that “it was my destiny that it (OROP) has been fulfilled.”

The PM did take note of his government’s detractors overall, but tried to swat away the criticism arguing that “some people have a habit of being depressing (nirasha kee aaadat), they revel in it and sleep well because of it.”

While previous governments had focused on plans, his government focused on implementing plans, he argued.
He recounted a long list of achievements: 20,000 crores deposited in new bank accounts opened by the poor between 15 Aug 2014-15 Aug 2015 (as many as 17 crore new accounts were opened), 10 crore families benefiting in 100 days with insurance schemes, 20 lakh people giving up gas subsidies, 1,000 crore raised in FM auctions, 3 lakh crore in the coal auction, 1800 cases of corruption registered, and renewed efforts at eradicating black money. “Believe it or not, no one dares to send black money abroad anymore,” he claimed.

In 2014, Mr Modi had sizzled as the brand new conqueror of the people, fresh in his triumph and glowing with hope. In 2015, he is already beginning to look like a somewhat jaded incumbent, coming to terms with the limitations of the system, still pouting the fancy lines that were so part of his magic but finding that people who like the promises also want to see them delivered.