CAN PAKISTAN GET OFF THE TIGER?

A year or so ago a respected social scientist told me a telling account of his meeting with a Pakistani general and his wife at a reception in a foreign capital. They were being asked worried questions about the deteriorating security situation in their country but cheerily swatted away all such queries — ‘what the hell are you talking about’– and then, for good measure, added, ‘Come to Islamabad, we still have the best wine and cheese, you know.”

It sounds almost apocryphal but the story for me has come to symbolise the Pakistani elite’s deep state of denial over the terrible crisis it is facing. The chickens have long been coming home to roost on Pakistan’s Janus-faced response to terror but nothing illustrates the ostrich-like denial better than the public response to the WikiLeaks revelations.

A thoughtful article in Foreign Policy magazine notes that in the first two days after the story broke, there was a ‘deafening silence’ in the Pakistani media. Pakistani TV networks barely mentioned it at first and Bina Shah, a novelist based in Karachi, wrote on Twitter: “Why is nobody in Pakistan discussing the WikiLeaks story? It’s sensational.” The indifference wore away a little towards mid-week but the coverage now largely focused on denials by the ISI and the motive behind the leaks.

This despite the fact that as many as 180 of the leaked files pertain to the ISI arming, financing and training the Taliban insurgency since 2004. According to the military’s grading system, 27 of these files are graded as C3 or above (coming from a fairly reliable source and possibly true) and many others are marked Sewoc or signals intelligence electronic warfare centre.

The documents cut a wide swathe: the planning of the Indian embassy bombing in Kabul, sending 1,000 motor cycles to Jalaluddin Haqqani for suicide attacks in Khost and Lagar, offering $15,000 to $ 30,000 bounties for killing Indian road workers and even a plan to poison the beer supply of NATO troops.

Most of this is not new to anyone who knows anything of the ground situation, including US intelligence. In July 2008, for instance, the CIA deputy chief confronted the ISI with evidence of complicity in the attack on the Indian embassy.

What is different this time is that the claims are now part of the mainstream discourse in the United States, making it just that bit more difficult domestically for American policymakers who have been playing footsy helplessly with Pakistan, as they angle for a way out of the Afghan morass and a possible deal with the Taliban. As the influential New York Times columnist Maureen Dowd notes, “Washington gave the Pakistanis billions, and, in return, they stabbed us in the back, pledging to fight the militants even as they secretly help the militants.”

Despite the global opprobrium about the ongoing linkages between the Army and the militants, a curious myopia seems to have gripped the Pakistani elites, almost a sense of false triumphalism at holding most of the cards in the Afghan end-game. The obsession with India has led to a complete sense of disconnect with the cost Pakistan itself is paying for this dichotomy.

Riding a tiger never pays. In the late 1970s, the Congress establishment unofficially backed a then unknown religious leader called Bhindranwale in Punjab as a counterweight to the rising influence of the Akali Dal. Bhindranwale quickly turned into a Frankenstein, leading to the catastrophe of Blue Star in 1984 and eventually the assassination of Indira Gandhi.

The fallout kept Punjab aflame for a decade. As Bhindranwale showed, there are no good terrorists. When you ride a tiger, it eventually devours you. Pakistan’s current problem is Bhindranwale times hundred.

Things can only change if there is a deep questioning within Pakistani society, instead of the defensive scrum that we have become accustomed to seeing every time an uncomfortable fact is raised.

There are enough sane civil society voices in Pakistan who recognise the abyss it is moving towards but there is little hope for forward movement as long as they are drowned out by the security establishment.

This is the big question for India as it ponders its next steps after the disaster of S M Krishna’s visit: does the Pakistan Army really want to get off the tiger? 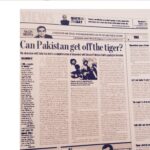