Peasants On The Athletics Track 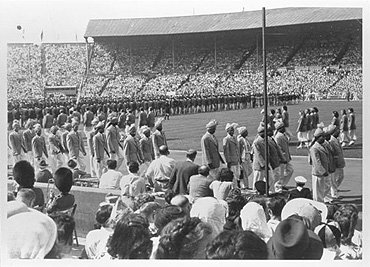 ‘100 Yards Round A Bend’ To Antwerp: Peasants On The Athletics Track

To Sir Dorab Tata goes the credit of starting systematic Olympic activity on Indian soil in 1920…In Sir Dorabji’s words:

“Having been educated in my youth in England I had shared in nearly every kind of English Athletics and acquired a great love for them. On my return to India I conceived the idea of introducing a love for such things there. I helped set up with the support of English friends, as General Secretary, a High School Athletic Association amongst numerous schools of Bombay, in the first place for cricket, and then for Athletic Sports Meetings which embraced nearly all the events which form part of the Inter-University contests every year in London.”

Adopting a game also meant adopting the entire paraphernalia of modernity that went with it. It didn’t just mean playing a foreign game, it also meant adopting European clothes, European rules and European notions of order and ‘fair play’. Sport became the playing field where tradition and modernity met, clashed, and fused. A good example here is that of the Deccan Gymkhana. After the successful start of the Harris Shield, the idea was modified in Poona (now Pune) with the creation of the Gymkhana.

The committee which ran the Gymkhana was not conversant with the details of managing such athletic meets on European lines and wanted to develop their sports programme more in line with established Indian traditions. Sir Dorabji, who was nominated the president of the Gymkhana, played a central role in the fusion of foreign and indigenous cultures that ensued.

At the first athletic meet the Gymkahana organized, Dorabji found that the competitors were ‘all boys of the peasant class working in the fields and living off poor fare…’ Naturally they had no idea of European rules or modern training of any kind. On attending a meeting of the Gymkhana, Sir Dorabji found that they were proposing to run their 100- yard heats round a bend without strings. This was because their sports ground was very small and the track was part of a rough unrolled grass field. To the peasants, running was running, but now it had to be undertaken under standardized and controlled conditions.

In Sir Dorabji’s letters on the subject, preserved at the International Olympic Museum, the one thing that strikes the reader most palpably is his sense of wonder at this clash of peasant and Western cultures in the races at the Deccan Gymkhana.

Other popular events included the long distance race of about 25 miles, rightly designated the Marathon. The peasants who participated were used to running barefoot on hard macadamized or dirt roads. Despite their lack of training and primitive conditions, the first three or four men ran the distance in fair time. As Sir Dorabji observed, their time ‘would compare well with the times done in Europe or elsewhere’. In 1919, some of their times were close to the times clocked in the Olympics.
Suitably impressed, the Tata scion decided to send three of the runners, even at his own expense, to the Antwerp Games of 1920. This was the birth of India’s Olympic encounter and nationalist sentiment was at its core. As Dorabji Tata described his motives in a personal letter to the IOC president, Count Baillet Latour, in 1929:

“I therefore offered to arrange for the sending of three of the best runners to Antwerp to run the Olympic Marathon at the next meeting, when I hoped that with proper training and food under English trainers and coaches they might do credit to India. This proposal fired the ambition of the nationalist element in that city to try and send a complete Olympic team.”

But the peasant athletes had little idea of what was required to participate in the Olympics nor of the standard of performance essential to qualify for any of the events. For instance, a key member of the Gymkhana, when asked what time he thought was standard for a 100-yard race replied that it could be anything ‘from half a minute to a minute’. He was ‘astounded’ when told that it was not a matter of minutes but rather of tenths of seconds.