And we played cricket too 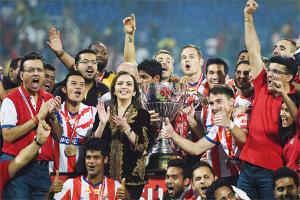 Leagues have given sports like kabaddi, football and tennis a leg up but that may not be enough to transform Indian sport.

Japan was a nobody in global football when it started its professional J-League in 1993.

It was packaged as much as a family entertainment event as the new Indian Super League (ISL), its league mascots were designed to entice children by producers who had worked on children’s brands like Sesame Street, and it brought former retired superstars from around the world. The legacy: Japan has made it to every World Cup since 1998. Is it realistic to expect the ISL do the same for India?

After a year when all kinds of sports leagues proliferated in India, the bigger question is whether these leagues are sustainable in a cricket-mad country and can they revolutionize Indian sport overall.

While cricket remains the undisputed king of Indian sport, garnering about 90% of money generated by Indian sport broadcasting, other sports are growing fast. At Kolkata’s Salt Lake City stadium, 55,000 people turned up to watch the inaugural ISL game on October 12 and as many watched the finals at Mumbai’s DY Patil stadium on December 20. Overall, as many as 1.58 million football fans turned up at ISL stadiums over two months. More revealingly, data shows that 410 million Indians tuned in to watch it on TV, within respectable distance of IPL’s TV audience of 560 million. Combined with the other big surprise of the year, the Pro-Kabaddi League, which drew 435 million TV watchers, the future is certainly looking brighter for non-cricket sports. More so, because 57% of ISL TV-watching came from women and children, as did 53% of pro-kabaddi – making both the kind of family friendly properties that advertisers like. The Mahesh Bhupathi-promoted International Premier Tennis League that brought Roger Federer and Novak Djokovic to Delhi in December also generated positive numbers.

Uday Shankar, CEO of Star India, which co-promotes and broadcast ISL, says “I don’t think there is anything so unique about our society or character that we have to be a one-sport country. We remained a one-sport nation primarily because no other sports body had either vision or resources. As more games get media support people will start consuming them, playing and investing in them.”

Between 2008-2013, India’s sport business grew five-fold from Rs 1,139 crore in 2008 to Rs 4,109 crore in 2013. Sensing the growth, Star India, the country’s biggest broadcaster, is investing Rs 20,000 crore in sports, 30-40% of which will go to non-cricket sports (roughly twice the current size of the current TV sports market). Television is crucial because as Shankar says, “You cannot build a sport without putting it on television.” Cricket, for example, expanded in the 1980s-1990s with the growth of Doordarshan, and later with satellite television, which provided a platform for consumption as well as recognition. Says Shankar, “Even before money, every sportsperson craves first for recognition and then adulation. TV facilitates both and if a sport has to grow and compete with cricket it has to have a fair share of TV exposure.”

Can sport leagues transform Indian sport? Viren Rasquinha, former India hockey captain and CEO, Olympics Gold Quest, points out, “The positive of the leagues far outweigh their negatives so it is a great development but if you think that just by having the leagues you will turn into a world power in sport, you need to lower your expectations.” A popular league can only be one driver among several others like improv ing infrastructure, ushering in professional sport-management and inculcating a true sporting culture of excellence. Like IPL, Hockey India League, for example, brought the world’s best players to India. “Sharing the dressing-room with them, seeing what they do on match-day, playing regularly with them,” was great for Indian hockey and certainly helped improve it, says Rasquinha. Yet, much more needs to be done. “It can only be one component of a wider superstructure”.

Few who invested in the leagues have made money so far. Most understand that gestation periods in such investments are high but expectations are high. IPTL founder Mahesh Bhupathi, for example, expects franchisees to break even in 3-5 years. Says Debabrata Mukherjee, vice-president, marketing and commercial, Coca Cola India, which sponsors IPTL: “We are happy with the response because IPTL brought marquee players, connected with multiple geographies and had high viewer-appeal while being associated with healthy, active living so it is a strong association as we go forward.”

The rise of players like Novak Djokovic, Ana Ivanovic and Jelena Jankovic led to a tennis revolution in Serbia, a country with just about 10 million people and no great tradition in the game. The real legacy of leagues like IPTL, ISL and others will be if they can help trigger a similar sporting revolution in India. 2014 has opened up an exciting new window. Can India climb through it?