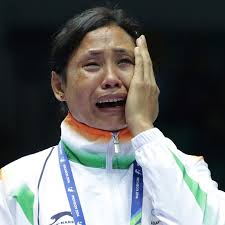 Instead of turning the lens on itself and the flawed system of scoring it presides over, International Boxing Federation (AIBA) has punished Indian boxer Sarita Devi for her protest in Incheon after a surprise loss to her South Korean semi-final opponent. Letting her emotions get the better of her, Devi refused to accept the bronze medal on the podium but subsequently apologised.

Her unconditional apology should have ended the debate about her behaviour and AIBA would have done better to ask itself why the Incheon Asiad was marred by such vehement charges of bias, not just by Indian boxers, but by other teams such as Mongolia. Instead, by suspending Sarita along with three coaches — chief coach Gurbaksh Singh Sandhu, women’s coach Sagarmal Dhayal and foreign coach BI Fernandes — AIBA is being petulant.

AIBA must recognise that under new rules, boxing is the only major contact sport where spectators cannot see points awarded by judges as the fight unfolds. This is not the case in wrestling, judo or taekwondo. Boxing spectators learn how judges award points only after three rounds for men and four for women. Such subjectivity will always lead to allegations of bias, if not corruption. Boxing needs reform and this is why most people who saw the bout sympathised with Sarita Devi. Her suspension means she will miss next month`s women`s world championship. AIBA must reconsider and reform its own rules, rather than punish sportspersons.