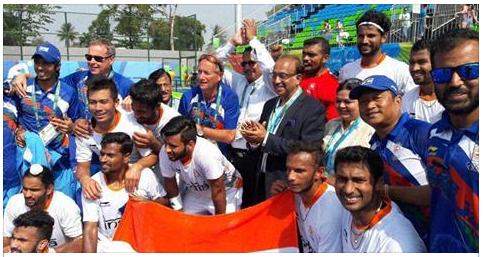 India’s athletes are yet to open their medals account in Rio but saddi Dilli has already left an unforgettable imprint on the XXXI Olympic Games. As many as 205 countries are competing in Rio but only officials accompanying India’s newly-minted sports minister Vijay Goel were found to be “aggressive and rude” enough to earn an official rebuke from the organisers. The letter from Sarah Peterson, continental manager for Rio 2016 Organising Committee couldn’t be more embarrassing.

It describes to India chef-de-mission “multiple reports of your Minister for Sports trying to enter accredited areas at venues with unaccredited individuals”, attempts by ministerial staff to “push past our staff”, several “previous warnings” of similar behaviour and concludes with a threat to cancel the sports minister’s accreditation and privileges at the Olympic Games if there are “further examples of this type of behaviour”.
It could have been a missive from a miffed headmistress to an unruly school boy, except that this is about an Indian government minister purporting to represent the country abroad.

No Indian reading this letter would fail to recognise in its words the special officiousness of ministerial staffers in public places that we all encounter and the unique imprint of the lal-batti VIP culture of high officialdom that we are all so used to seeing. In fact, no one would have batted an eyelid had such obnoxious behaviour been reported at an Indian stadium – it would have been deemed to be quite normal.

To be fair, Vijay Goel, along with India’s chef-de-mission at the Olympic Rakesh Gupta, has personally denied the allegations vehemently, first saying that “to my knowledge, we have been following all rules”, then calling it a “misunderstanding”. While India’s chef-de-mission has publicly explained that the minister entered the playing area “inadvertently” after an Indian event without knowing he needed a special pass but left after he was asked, Goel himself has argued that he was taken by local volunteers and did not flout any rules.

Whatever happened in Rio, the bigger question is why does a sports minister even need to be in Rio at all? Goel, who has been in Rio since August 7, accompanied by his wife, is only following the time-honoured Indian tradition where ministers and officials reign supreme at such events. He has for the past week posted several selfies and photos from the arena including one with a visibly exhausted Vikas Krishan just after his boxing bout. If it is Goel in 2016, it was Ajay Maken in 2012, without whom no photo-op or press conference with Indian Olympians in London was complete.

Second, the great Indian tradition of officials using Olympic for foreign junkets continues. India this time may have sent its largest ever Olympic contingent of 118 athletes to Rio, but they are accompanied by as many as 80 officials. Support staff are vital but only 14 Indians staffers in Rio have actually been cleared for training venue passes.

This points to the fact that many of them actually have little to do with sport. Along with much-needed coaches, masseurs and physios, many of the staffers are actually officials enjoying a jaunt on taxpayers’ money with the patronage structure that is Indian sport. Abhay Chautala, who heads the boxing federation is already in Rio posing for photo-ops, and even Haryana government cabinet minister Anil Vij has announced that he will be leading a delegation to Rio to see the “games of Haryana players” and to have a “look” at the infrastructure.

Instead of getting out of the way, our politicians continue to treat sport as feudal fiefdoms. Before leaving for Rio, Goel for example said in an interview that, “We have spent between 30 lakh to 1 crore on athletes.” This is neither such a big amount by global standards, nor a largesse to our athletes. This is their right. If anything sports administrators have failed our athletes. The 6-medal haul in London was followed by official euphoria of 10-medal predictions for Rio but the sarkari support structure has actually regressed since 2012 and the consensus among most players is that, “London preparations were better than Rio.”

One statistic makes this clear: though Rs 46 crore was sanctioned to be spent till Rio 2016 for the sports ministry’s Target Olympic Podium (TOP) scheme for 106 elite athletes, only about Rs 6 crore had been spent till December 2015. Whatever successes we will see at Rio will be because of individual efforts, rather than any systemic change. In Indian sport, the more things change, the more they remain the same. 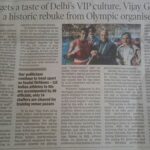