When Sir Dorabji Tata organised the first modern meet of Indian athletes with an eye to the 1920 Antwerp Olympic Games, he found that despite running barefoot their performance compared “well with the times done in Europe or elsewhere”. Suitably impressed, Tata personally financed three of the best runners for Antwerp, a move that in his own words “fired the ambition of the nationalist element in the city”. Eighty nine years after that wind-swept day in Pune, when Tata first dreamt of an individual Olympic gold for India, Abhinav Bindra has finally found the Holy Grail.

As the tricolour was hoisted in Beijing, to the stirring tunes of Jana Gana Mana, the poise and pride on his bespectacled visage spoke to a billion Indians, telling them that India could win too. Bindra’s achievement is as much a testament to his own skill and courage as it is a metaphor for the larger story of India. His gold medal-winning shot on the final attempt is the clarion call of a new India, an India that is not scared of looking destiny in the eye, a nation that goes out to win, not just to participate. Bindra has shattered the grand narrative of failure that has characterised Indian sport just as the emergence of the IT industry in the ’90s signified the end of the “Hindu rate of growth” that defined the economy since the ’50s.

Just as a Narayana Murthy or an Azim Premji created the self-belief for India to act as a global player after decades of isolationism and the license-permit raj, so has Abhinav Bindra ushered in a new era of self-confidence. As the noted Olympic historian John Macaloon argues, the Olympics are a “crucible of symbolic force” into which the world pours its energies and a stage upon which, every four years, it plays “out its hopes and its terrors”.

For every Indian, that terror has come in the form of a question: A billion people and no gold medal. Why? Well, we now have an answer and thank god for Abhinav Bindra!
For far too long, we have complained about our failures in sport. We have blamed the system, we have blamed the politicians who run it, we have even questioned our genetics. Every four years, it has become a collective national ritual to blame everyone else when we find ourselves wanting in the global mirror of the Olympics, only to move on and repeat the same catharsis four years later.

Bindra has shown that it is possible to succeed in spite of the system. The late Pramod Mahajan once said only half-jokingly that the Indian IT and beauty industries rose to great heights only because the government did not realise their presence until they had already made a mark. Abhinav Bindra’s success too has followed a similar template, at least with respect to the national sporting superstructure. Born with the luxury of affluence and an indoor shooting range in his backyard, he emerged as a child prodigy, only to taste initial defeat at Sydney and Athens. He could as easily have given up, blamed the system and have been content with his World Championship and Commonwealth Games medals. But he persevered. It is a victory born out of the pain of loss and an iron will to succeed.

Here at last is India’s answer to those that point to the success of Surinam’s Anthony Nesty or that of the Ethiopian runners, for that matter. It is indeed possible to succeed without access to the best sporting facilities. This is not to argue against creating efficient systems — that would be a terrible folly — but in sports there are moments when all it boils down to is self-belief.

What now of the future? Does this victory mean the arrival of a national Olympic culture? Or will we clap our hands in glee and return to our daily dose of cricket after the Games are over? In the euphoria of victory, it is important to remember that at least 15 corporate houses turned down pleas to sponsor the Indian shooters before the Olympics. Bindra deserves the nation’s highest accolades and corporate coffers will now open up for him like Alladin’s cave but the true legacy of this victory will lie in whether money can now be made available to build the training superstructure for other athletes. Make no mistake. This is no flash-in-the-pan victory.
Bindra is only part of a phalanx of world-class Indian shooters that have emerged in the past decade. Monday was his moment but each member of the Indian shooting team is capable of winning a medal. This is the terrifying beauty of sport, its unpredictability. This is why we watch it because it showcases all that is glorious and tragic about human nature; all that is uncertain and indescribable. The key is to invest in having enough people at the top echelon of any sport, for one to click when the moment comes.

For those that look longingly across the border at China’s awe-inspiring sporting machine, remember that the Chinese too built their success by focusing on key sports initially — gymnastics, table tennis, badminton and athletics. We cannot hope to replicate the Chinese model blindly. The organisation of Indian sport is far too complicated and far too political to allow for a uni-linear approach like the Chinese or the East Europeans before them. Like Indian democracy, Indian sport too has evolved its own unique model, distinct from everyone else. When Kapil’s Devils won the cricket World Cup in 1983, no one could have predicted that the surprise victory, coinciding with the television revolution, would ignite deeper processes that would ultimately turn India into the spiritual and financial heart of the global game. Now Bindra’s gold has created another opportunity that if harnessed well could well usher in a new era in Indian sport.

In 1929, a year after India had won its first Olympic gold in hockey, Sir Dorabjee Tata had already foreseen a future of sporting despair. Prophesying the bitter administrative battles that would harangue Indian sportsmen, he wrote “India is not yet ripe for the International Olympic Games. The love of such things is not ingrained here. There are so many communities, so many different religions, so many languages and dialects, so many different customs and ideals, that it is almost impossible to select a national team.” Political intrigues still plague Indian sport and the future is still uncertain but for now at least, somewhere, Sir Dorabji must be smiling.

Nalin Mehta is the author of ‘India on Television‘ and has co-authored ‘Olympics: The India Story‘ express@expressindia.com 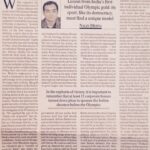