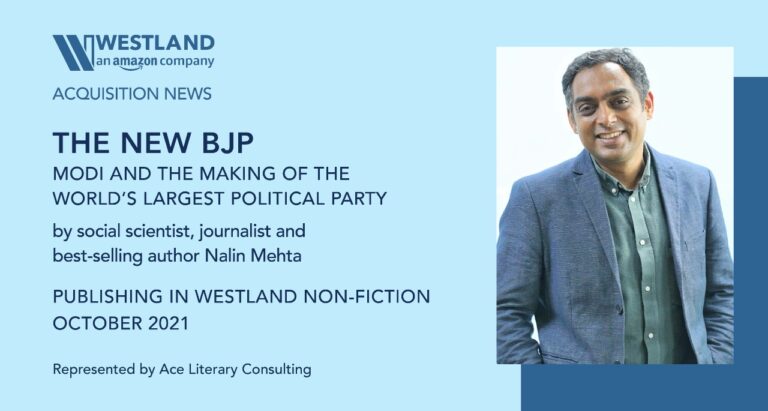 The New BJP: Modi and the Making of the World’s Largest Political Party

Westland Publications wins six-way auction to publish Indian journalist and social scientist Nalin Mehta’s forthcoming book, The New BJP: Modi and the Making of the World’s Largest Political Party, a ground-breaking account of the BJP’s rise to power in India.

Westland Publications (an Amazon company) is pleased to announce the acquisition of a new book by journalist and social scientist Nalin Mehta titled The New BJP: Modi and the Making of the World’s Largest Political Party. It was acquired after a fiercely contested auction featuring the top six publishing houses in India. It will publish under the Westland Non-Fiction imprint in October 2021.

An explosive, revisionist history, The New BJP examines how the BJP became the world’s largest political party under Narendra Modi. It goes beyond Hindutva politics to explain how the BJP reshaped the Indian polity using its own brand of social engineering cleverly using caste to build caste-based coalitions, even as it claimed to have built a new welfare state with vigorously publicised development programmes.

The book is based on a specially created unique digital archive uncovering startling new insights. Artificial Intelligence has helped find patterns in the data that would otherwise be missed by the human eye. The New BJP introduces three indices —The Mehta-Singh Social Index, developed for this research, studies the caste composition of Indian political parties; the Narad Index calculates communications patterns across topics and audiences; and PollNiti interconnects hundreds of political and economic datasets. These data-rich techniques are complemented by access to untapped historical records, exclusive interviews with party leaders and comprehensive reportage from across India.

The New BJP is a non-partisan, fact-based account and critical documentation of the BJP. It is a cross-disciplinary understanding beyond the multiple cultural divides the party embodies. It also provides a fresh understanding of the party’s growth areas — the Northeast, women voters, and South India with the Karnataka model. The New BJP offers a dispassionate account of what is happening in India today.

Commenting on the acquisition, Nalin Mehta said, ‘In a deeply polarised polity where TV news channels only shout to the converted on either side and where social media is deeply split into echo-chambers, I have deliberately chosen in this book to keep aside personal value judgments. This is not a book about whether what the BJP stands for is right or wrong for India; or whether Hindu nationalism, as opposed to Hindu traditionalism, in a Hindu-majority democracy is good or bad. It is about why the BJP won, or did better than earlier, in more elections than it lost, or performed poorly in, since 2014. Such a method and approach on studying the BJP has never been more necessary. Unless facts are assessed and sifted, rational debate is not possible. This book sheds new light on the modes of political power in India, the mechanics of BJP’s election triumphs, the role of technology in politics, how the party won power nationally and what this portends for Indian politics. I am delighted to be working with Karthika and her amazing team at Westland on The New BJP.’

Karthika V.K., Publisher, Westland Publications added, ‘Nalin’s book is path-breaking in its application of data to the task of understanding exactly how the Indian democratic system functions. His fascinating research and insightful explication of his findings enlivened by anecdotes and marvellous visual storytelling transforms our understanding of the ways in which power is sought to be achieved and retained. I feel privileged to be part of the process of bringing the book to readers around the world.’

Jaya Bhattacharji Rose, Ace Literary Consulting who represents the book and conducted the auction, says, ‘The auction was extraordinary given the circumstances. The publishing industry, as with other sectors, has been affected by the pandemic. The furious interest from the publishers affirmed their faith in a pioneering idea that had been well-argued and supported with sufficient empirical evidence. Ace Literary Consulting, that represents the best of literature, is honoured to be representing Nalin Mehta with his seminal text The New BJP.’

He was previously Executive Editor, The Times of India-Online, where he led a number of AI-led tech innovations to redefine digital media. He has also served as Managing Editor, India Today (English TV channel) and Consulting Editor, The Times of India. Mehta is the author of five best-selling and critically acclaimed books. His books include India on Television (winner of the Asian Publishing Award for Best Book on Asian Media, 2009), Behind a Billion Screens (Longlisted as Business Book of the Year, Tata Literature Live, 2015), and most recently, the best-selling Dreams of a Billion (2020), co-authored with Boria Majumdar.
Mehta was founding Co-Director of the Times Lit Fest Delhi (2015-18) and a founding joint editor of the international peer-reviewed journal South Asian History and Culture (Routledge) as well as the Routledge South Asian History and Culture book series. A DFID-Commonwealth scholar, Mehta has a PhD in Politics from La Trobe University, Melbourne; M.A. International Relations, University of East Anglia, UK, and B.A. Journalism (Honours) from University of Delhi.

Founded in 1962, Westland is one of India’s largest English-language trade publishers, bringing out print books and e-books in genres ranging from popular and literary fiction to business, politics, biography, spirituality, popular science, health and self-help. Its key publishing imprints include Context, which publishes award-winning literary fiction and non-fiction, Eka, which publishes the best of contemporary writing in Indian languages and in translation, Tranquebar, home to the best new fiction from the Indian subcontinent, the eponymous Westland Sport and Westland Business, Westland Non-Fiction, and ‘Red Panda’, which publishes a range of books for children of different ages.

Nalin Mehta’s ‘The New BJP’, a deep-dive into the party’s rise

The new BJP is the old Congress — with teeth and claw, plus data