Has UGC run its course?

Writing at the turn of the last century on India’s education system, Swami Vivekanand forcefully argued that the “present system of education is all wrong.” The comment rings true even today. This is why HRD minister Smriti Irani announced in November last year that her ministry is reviewing most education-related regulatory bodies, including the gargantuan University Grants Commission (UGC). PM Narendra Modi too declared at the Indian Science Congress in January that his government will pay as much attention to ease of doing R&D in India as to ease of doing business. An overhaul of our outdated education system is being talked about at a time when no Indian university is ranked among the world’s top 200, and India is the only BRICS nation without representation among the top 100 global universities.

There is no dearth of money for the overhaul — the UGC dispenses grants of over Rs 10,500 crore a year on higher education — but like in other sectors that were opened up after economic liberalization, the problem lies in the structure of quality-control systems that have failed to keep up with ground realities. Last month, one of the first review panels set up by Irani to review the UGC’s functioning recommended scrapping the body itself and replacing it with a National Higher Education Authority, through a new act of Parliament. That may be easier said than done and while experts debate possible solutions, all agree that the system needs an overhaul.

Queried on the possibility of a new authority, UGC chairman Prof Ved Prakash says, “We first need to answer whether we have exhausted all interventions which could be incorporated in the existing system before we go with a new system.” He adds though that “there is no denying that new thinking is called for in rejuvenating higher education”.

When the UGC Act was enacted in 1956, no one had foreseen that higher education would eventually grow outside the public system. Yet, by 2013, 64% of institutions and 59% of India’s 2.3 crore students in higher education came from unaided private entities (see chart). Till recently, teachers and students from these institutions could not even access research grants provided by UGC. Compare this to the US where a private university like Stanford and the publicly funded University of California in Berkeley can “both compete for grants from the federal government,” says Prakash.

What can be done? The UGC chief insists that “within the confines of the existing higher education system several academic reforms including semesterization of curricula, choice-based credit system, direct online transfers of scholarships and standardization of examinations are already being implemented. New structural reforms can also be built into the existing governance system. This may include gradual movement from state-regulated system to state supervisory system leading ultimately to a university entrepreneurial system.”

Second, because India’s education system is federal, states have the right to establish universities, but don’t necessarily follow up with an obligation to ensure basic minimums in infrastructure or base it on actual needs. A good example is the bunch of one-room universities that popped up in Chhattisgarh after it was created in 2000 with sanction from its first government. Among states, Rajasthan has the highest number of universities at 61 (35 of them private), more than UP which has only 59 (21 private) though it is much bigger and more populous. “UGC is obliged to give recognition once a state sets up a university. It needs to have an important role in ensuring that before an institution commences work, it satisfies the prescribed norms for infrastructure and related requirements,” says Prakash. Currently, UGC can only impose a Rs 1,000 fine on non-compliant universities. 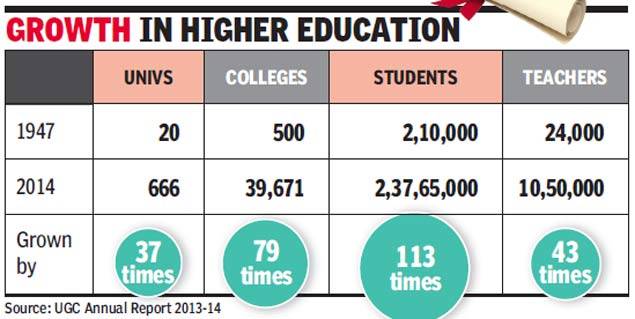 Big is not beautiful
Third, and more fundamentally, unlike in other liberal democracies like the US, Australia and the UK, where accreditation, research funding and infrastructure spending on universities are regulated by separate entities, UGC is an omnibus body tasked with multiple functions.

“These functions should be independently run by separate entities which should not be linked to each other because the skills required for each are different. Development grants for infrastructure should be governed by financial and management experts while research grants should be adjudicated only by eminent professors who are experts in their field, not bureaucrats,” says a former university vice-chancellor, speaking on condition of anonymity. “When you link all these functions together like it is now, it gives too much power which can be misused.”

Previous expert committees on higher education — one chaired by Prof Yash Pal in 2008, another by Sam Pitroda under the National Knowledge Commission — also talked about the need for reform, albeit from different perspectives. Prakash agrees that “reform is definitely needed”. “The task of regulating the sector and providing research funding,” he says, “can be separated for more effective functioning.” The sooner that happens, the better. India has the world’s largest proportion of young people. If large sections of these Indians remain functionally uneducated, unskilled and unable to compete globally, our demographic dividend may soon turn into a demographic disaster.