Was London a flash in the pan? Rio will tell us

A couple of months ago, Rio de Janeiro’s mayor Eduardo Paes met a group of sports journalists about his preparations for the 2016 Olympics. “Things are fine,” he said. “Every day is a big problem.”
You could say the same thing about India’s bid to ramp up its medal tally. The 31st Olympic Games loom before India like none other in the past — for the first time we will be heading to the world’s greatest sporting stage seriously expecting to win five-six medals. Sports minister Sarbananda Sonowal has gone even further, announcing that we can “win 10-plus medals at Rio”. For a country that only managed a grand total of seven individual medals in over a hundred years at the Olympics (including Norman Pritchard’s two silvers in 1900) before the unprecedented six-medal haul in London 2012, this expectation, by itself, is a huge shift. The question is, how realistic is this?

Beneath the official euphoria, though, the reality is that instead of building on the gains of London 2012, the sarkari support structure has actually regressed since then. Speaking to a cross-section of athletes and player-managers, the consensus is that the “London preparations were better than Rio”. So, what went wrong and how can it be fixed in the eight months before the opening ceremony in Rio’s Maracana Stadium on August 5? In October 2014, the sports ministry officially launched its new Target Olympic Podium (TOP) Scheme to identify and fund elite athletes who could win medals at the 2016 and 2020 Olympics. Overseen initially by a committee that included Rahul Dravid, Abhinav Bindra and P Gopichand, this was a well-intentioned scheme and most key athletes were identified by December 2014. Today, 106 athletes are officially part of it, but speak to any of them, and it’s clear that it hasn’t worked well in practice. One statistic makes this clear: though Rs 46 crore were sanctioned to be spent till Rio 2016, only about Rs 6 crore had been spent till December 2015.
The plan has been disappointing so far because of two reasons. First, it ran into the “in-built flaw” of India’s defunct sporting federations. While there was money for athlete training programmes, this could only be spent if approved by the athlete’s federation. Many federations didn’t like what they saw as encroachment of their fiefdoms and created delays. As one senior manager puts it, “The failure to bypass the federations was the problem.” Second, there was the problem of bureaucratic sloth. As another manager explains, “It takes three weeks to do the paperwork to get the money but I can give you umpteen examples where even when money was approved well in advance, payments came late. Athletes should be focusing on only training, not running around babus. Foreign coaches expect payment in advance and late payments directly affect India’s credibility.”
When asked about these problems, a senior National Sports Development Fund official admitted that they had received such complaints but blamed the government system. Maneesh Bahugana, CEO, Anglian Medal Hunt, argues that “government may have had good intentions but the fact is that whatever successes we will see at Rio will be because of individual efforts, rather than any systemic change.” Viren Rasquinha, former Indian hockey captain and CEO, Olympic Gold Quest, says, “We haven’t done as well as we could have in the last couple of years but must lift ourselves to war-footing in the next eight months in terms of speed, efficiency and quality of support to our athletes if we are to make a mark on the medal tally.”

So what’s the upside for India? Stargazing in sport is pointless, but on current form our medal hopes for Rio rest on badminton, shooting, boxing and wrestling — with a serious shot in tennis doubles and archery. Qualification processes for most of these are still on — 63 Indians have qualified but the final contingent, sports ministry officials say, is expected to cross 100 — and much will depend on the final draw so assessing individual chances would be meaningless at this stage. The World Badminton Federation’s ranking on May 5, 2016, for example, will decide who plays in Rio but current world No. 2 Saina Nehwal would certainly be looking to up her bronze from London. In shooting too, the qualification is still open but along with Beijing goldfinger Abhinav Bindra and London bronze medallist Gagan Narang, the current qualified Indian phalanx includes the in-form Jitu Rai, Army shooter Gurpreet Singh and Apurvi Chandela. In wrestling, Commonwealth Games gold medallist Narsingh Pancham Yadav has already qualified. London bronze medallist Yogeshwar Dutt still has to qualify while two-time silver medallist Sushil Kumar may be playing off with Yadav for a berth. Some boxing slots are also still up for grabs but the women archers as well as Sania Mirza and Rohana Bopanna in tennis mixed doubles would also be serious contenders.

The Olympics are a “crucible of symbolic force”, as historian John A Macaloon once argued, a stage upon which the world plays “out its hopes and its terrors”. For generations of Indians, until recently, that terror came in the form of a fouryearly question: a billion people and no medals? Abhinav Bindra broke the gold ceiling in Beijing, London was a watershed and Rio will be a test case for Indian sport. It will answer whether London was a flash-in-the-pan — a carryover from the sporting momentum built for the 2010 Commonwealth Games — or the beginning of a deep and real Indian sporting renaissance. 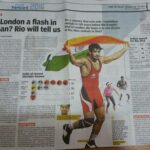