I didn’t watch 2011 World Cup final after getting out, nor did Viru: Sachin Tendulkar 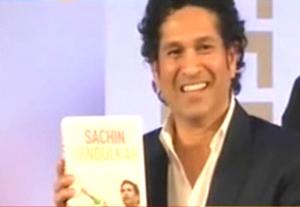 They came dressed in formals, not in the familiar all-whites or the Men in Blue attire, etched indelibly in a generation’s memory as they scored a mind-boggling 88,218 runs in Tests and ODIs. But when they spoke, the Fab Four of Indian cricket – Sachin Tendulkar, Sourav Ganguly, Rahul Dravid and VVS Laxman – rolled back the years. There was the easy camaraderie that only comes after sharing rooms, your worst fears and the finest moments of your lives over thousands of days playing, travelling and bonding together.

The anecdotes flew thick and fast at a function in Mumbai to mark the release of Sachin’s autobiography on Wednesday. Sachin revealed that he did not watch any part of the 2011 World Cup final after his dismissal and didn’t allow his opening partner, Virender Sehwag, to watch either.

“In an earlier game in Ahmedabad, I had been getting a massage with my head down and Viru was sitting next to me and we did well. So in the final, I stayed on the massage table and kept Viru with me. He said, ‘Let me see the game a little bit’. I said, ‘No, you see as much as you want on TV later’. And we won,” said Tendulkar.

Ganguly narrated how he once asked Sachin to face the first ball of the innings as he was going through a rough patch and thought it might change his luck. Sachin declined, saying he never took first strike. So Ganguly walked straight to the non-striker’s position, leaving Sachin with no choice but to take guard. Even as the audience roared with laughter at Sourav Ganguly’s anecdotes about Tendulkar, Sachin hit back by mentioning how he was once struggling with an injury, which later turned out to be a broken rib.

“I wasn’t even being able to put bat to ball and Sourav strolled down the pitch and told me, ‘Tu champion hain re’ (Come on, you’re a champion).” Inevitably, Rahul Dravid was asked about the infamous declaration when Sachin was unbeaten on 194.

He responded, “If I charged a penny for every time I was asked about the Multan declaration, I would be a multi-millionaire by now.” But he was quick to add, “My greatest memory of that Test is asking Sachin to bowl the last over of the day after the declaration. He got Moin Khan out and he was visibly overjoyed because he was again doing what he did so many times – helping India win. We walked off as a team.” Fondly referred to as ‘Jam’ by Tendulkar during the evening, Dravid revealed that the two would converse in Marathi during their long partnerships in the middle.

He also said, “When I first started playing for India, I was startled because he would always ask ‘kya ho raha hain’. He was Sachin Tendulkar, had already played for seven years and was captain. What could I tell him about the pitch or conditions? I thought he was taking the mickey out of me. Later I realised that is how he is: always interested in knowing what is happening on the pitch and what the bowlers are doing.”

Of course, the subject of Greg Chappell came up too.

“The dressing room environment was negative at that time,” said Tendulkar.

He also mentioned that he was extremely depressed after India’s disastrous performance in the 2007 World Cup but cheered up after he got a call from his childhood hero, Viv Richards. “We spoke for a good 45 minutes and he told me there was still a lot of cricket left in me. At that juncture, that helped.” 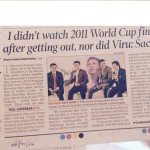