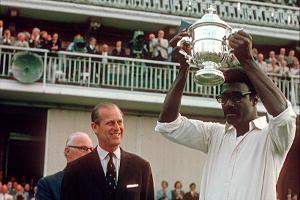 Cricket’s showpiece event is set to kick off next week but it’s as much about business as it is about the romance of the game. Sunday Times looks at everything that’s different about this World Cup – from new balls to eyeballs.

The first cricket World Cup in 1975 was not even called the World Cup. With only 15 games and a new one-day format that everyone still saw as a “necessary evil” that followed Test matches, insurance-giant Prudential insisted as tournament sponsor that it be called the Prudential Cup.

And so it was, on the silver trophy that Clive Lloyd eventually held aloft and even in the game’s bible, Wisden. Yet, charting the early history of the World Cup, cricket writer and historian Gideon Haigh argues the idea was a huge success because “like the best innovations, cricket’s World Cup met a need nobody had foreseen.” It fulfilled the eternal need of sports fans to dramatically square off their teams and see who was best: in a way that geeky and constantly oscillating rankings could never hope to match.

Cricket’s World Cup 2015 is very different from that first edition. Starting on Valentine’s Day with 42 matches over 43 days, 14 teams and an estimated global TV audience of over 1 billion, it may be dwarfed in size by the Olympics or the soccer World Cup but remains the holy grail of the cricketing world and generates significant business, much of it in India (see box).

With Amitabh Bachchan sitting in the commentary box for the India-Pakistan game and commentary also in regional languages, it also promises to be a different viewing experience, reflective as much of India’s madness for the game as that madness shaping it.

There is a reason why the tournament’s first half in the group stages is essentially predictable: to ensure against an early exit by India or any of the big teams. Organizers and sponsors know what happened in 2007 when India and Pakistan crashed out of the Caribbean World Cup early. It killed TV interest in India and ruined the business that sustains such events. This time, everyone will be waiting for the quarterfinals when the big games really begin.

From the overs being reduced to 50 in 1987, to the first coloured clothing and white balls in 1992, Cricket’s World Cups have been signposts for how the game itself has evolved over the years. Its eleventh edition, returning Down Under after a decade and a half, will be different in more ways than one. One of the charms of cricket is the special role of host pitches which can completely alter the game. Australia, in the myth-making of cricket, has always been the land of pace and bounce, and New Zealand of seam and swing. Five of seven knockout games in this World Cup, though, will be played on drop-in pitches, curated away from the venue and dropped in before games, which significantly reduce the special peculiarity of local playing-conditions. The advent of pre-fabricated surfaces even prompted one Australian writer to call the tournament a “rental World Cup”.

How much this matters is debatable but the other big change from the last World Cup is the introduction of two new balls: one from each end. This is a good move aimed at checking the batting bias in one-day internationals (ODIs), with batsmen scoring more and more runs in each edition of the World Cup. The 1996 and 1999 editions produced over 14,000 runs each, but from 2003 onwards, each World Cup had produced over 18,000 runs. The two new balls rule will aid fast bowlers but may also diminish the role of spinners. India, with its mediocre bowling attack, for example, faces an uphill task.

What’s a World Cup without television and a court battle in India? Ever since the 2007 legislation that mandated compulsory telecasts of Indian cricket matches on public broadcaster Doordarshan (DD), irrespective of whether it had bought rights or not, the tortuous travails of legal cricketing battles around TV have been almost riveting as those on it. This time though, Delhi High Court has weighed in, ruling that DD can only show the matches on its terrestrial network, not on its channels compulsorily carried on cable and satellite. Taking into account the huge money paid by broadcaster Star India for these matches, a bench of Justices B D Ahmed and Vibhu Parekh ruled that the law meant to provide “access to the largest number of viewers, on a free-to-air basis” and its ruling seeks to balance these two factors. “There is no change in law as a result of this,” says a Star India spokesperson. “However, the implementation of this Act till now was flawed as these events of national importance were available to private cable and DTH operators as well. The High Court has only held that this is incorrect per the Act.”

Prasar Bharti may challenge the judgment in the Supreme Court but for now Star India can breathe easy, with over Rs 1,000 crore of advertising said to be riding on the World Cup.

After a year in which the ODI ratings have consistently lagged behind those for T20 ratings and the ODI-format itself faces questions, the World Cup will give it a fillip. In 2014, peak ratings for ODI series dipped to 2.0 TVR (compared to 3.9-4.1 in 2011-13).Advertisers will be betting that the excitement of the World Cup would change all that though the time-difference with Australia and New Zealand means that games will be live on Indian television in mornings and not on Indian prime-time.

ROMANCE OF THE CUP

Whether it was Kapil running backwards for an eternity from mid-on to send Viv Richards back in the 1983 finals or Imran’s famous pep-talk in his “ready-to-pounce” T-shirt in 1992, every World Cup brings with it its own legend. In 2011, it was about Sachin and the palpable desperation of one man for the Cup that animated India. In 2015, it will boil down to three good games from the quarterfinals onwards. After a horrible tour of Australia, Dhoni, one of only 4 Indian World Cup survivors from 2011, will be hoping he has them.