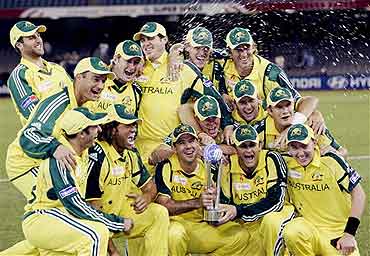 It is the ICC’s mini-World Cup but there is no enthusiasm for it in the country of the current World Champions, Australia. Cricket fans in Australia are focused entirely on the “revenge” Ashes series that will follow the Champions Trophy. A survey of sports pages across Melbourne’s two biggest newspapers—The Age and The Australian—over the last two weeks bears this out. Since September 24, The Age has carried 25 stories devoted to cricket—only one featured the Champions Trophy and that article too focused on why nobody cares about the tournament. Similarly, The Australian, for the same period, totaled 38 articles on cricket, only three of which focused on the tournament. Newspapers don’t necessarily reflect the feelings of their readers (as many Indian journalists learnt in the debacle of their coverage of the India Shining campaign) but they are an important barometer of a country’s make-up. At the very least, they indicate what the cultural gatekeepers of the newspaper industry— reporters, editors, page designers— think is the national mood. In Australia, the media industry is so tuned to the Ashes, to the detriment of everything else, that news of former England captain Mike Gatting playing in a charity match in Japan this week has attracted more press coverage here than the ICC’s showpiece event. Reason: pictures of Gatting batting in Japan revived memories of Shane Warne’s “ball of the century” in 1993, giving headline-writers and sub-editors another spin to focus sport pages on the Ashes coverage.

This dismal coverage of the lead-up to the Champions Trophy needs to be seen in light of the fact that unlike India, cricket itself is not the pre-eminent media sport in Australia. Australian Rules Football and Rugby occupy far more news space and the old imperial game is a distant third in the popularity stakes. In that sense, the total lack of interest in the Champions Trophy is somewhat similar to Australian apathy to the DLF Cup in Kuala Lumpur that their team won in September. That tournament again barely merited a mention in Australia’s sport pages. This fact was brought home to me when an Indian broadcast professional who has just joined the Australian Broadcasting Corporation in a senior position recounted to me his delight at finding that most Australians in his department at the ABC were cricket fanatics. But he was shocked when he realized that none of these “cricket fanatics” knew that their team had just won the DLF Cup, or indeed that such a tournament ever took place. The same “cricket fanatics” could recite to him players’ statistics, chapter and verse, for the upcoming Ashes series. This, to some extent, reflects older traditions of cricket as well as the changing nature of the global game where tournaments are being organized primarily for the Indian market. Older power centers like England and Australia have been left far behind in the brave new world of cricket.

But there is another dynamic at play here as well. Unlike the Ashes, which have traditionally been beamed on television audiences on free-to-air channels like Nine (and most recently bySBS) the DLF Cup was aired on the pay service Foxtel. Cable television in Australia is very different to cable television in India. By Indian standards, the Australian cable industry is miniscule. Australia has about 1.66 million pay-TV subscribers (roughly 22% of TV households) In contrast, Indian satellite television reaches an estimated 68 million homes (roughly 61% of TV households). The point is that much fewer people in Australia have cable TV—in absolute and in comparative terms—and for any event to receive real public notice, it must be aired on one of the five free-to-air TV services: ABC, Nine, SBS, Seven or Ten. To be aired only on pay television is at best, a second option, and at worst, relatively bad for the business of any sporting event in Australia. The Champions Trophy too will air on the pay-for view Foxtel network as part of Rupert Murdoch’s deal with the ICC and will barely register on the Australian sporting radar. It is little wonder then that the Australian cricket team, on the eve of its departure for India had to answer questions on whether they even cared or if they were more worried about what one reporter called “the elephant in the corner,” the Ashes. Brett Lee’s answer was as politically correct as they come: “You just have to focus on the job at hand…The Champions Trophy is one we have never won and that is our most important series coming up. Then we will come home and focus on the Ashes after that.” But it was a thinly veiled statement and the very fact that the statement even had to be made is a reflection of how Australians view the Champions Trophy.

If the Australians don’t care, who really cares for this tournament? Conventional wisdom says: India; and certainly the Indian media will hype this event and ride piggyback on the national passion for cricket. But even the Indian board doesn’t seem too interested because, as an ICC event, the financial bonanza from the telecast rights of this tournament will go to the ICC, not the BCCI. At a time when nearly 60% of the money that finances global cricket comes from Indian or India-focused companies, it is this dichotomy that underlies the current bout of hostilities between the BCCI and the ICC over players’ ambush marketing clauses for ICC-events. While the dispute is not about the Champions Trophy itself, it refers to corporate warfare over all such ICC-events and tensions are so high that ICC president Percy Sonn has even threatened the BCCI with taking away India’s right to host the 2011 World Cup. This particular battle, will no doubt, be resolved but the fact remains that outside of the sub-continental public, tournaments like the Champions Trophy do not really interest cricket fans elsewhere. As such, the only real utility of this tournament is to serve as a cash cow for the organizers. Of course, judging by past experience, if India does well in this tournament, the hype in the Indian press will break all bounds. Even if India wins, the central question remains: Whose champion is the Champions Trophy?