There was a time in 1991 when Sharad Pawar was the frontrunner to take over the Congress mantel after Rajiv Gandhi’s assassination. Candidate Pawar came down to Delhi as the race for prime ministership reached a climax and when it was over, the Times of India splashed across its front page a cartoon that summed up the denouement perfectly. Portraying the various stages from Mr. Pawar’s initial posturing to his genuflection, it had the memorable RK Laxman tagline, “He came, he saw, and he concurred”. Mr. Pawar has always been a politician’s politician, a master of the deal and the backroom but he has been known to miscalculate before, especially in matters outside of Maharashtra. With the IPL this time he has miscalculated again.

In the daily cacophony of the drama around the IPL, it is easy to forget that this is not the first time that cricket has become a lightning rod for powerplay between the Congress and the NCP. Back in 2006, when Jagmohan Dalmiya, beat the Kolkata police commissioner in an election for the Cricket Association of Bengal, the Congress, convinced that Pawar was also actively trying to build an alternative coalition at the Centre, had seen the cricket election as an opportunity to snub him and make a political point.
Behind the scenes, it backed Dalmiya against Buddhadeb Bhattacharjee and Pawar’s candidate and a senior cabinet minister even went to Kolkata to campaign against the police commissioner. Further back, in 2004, when Pawar famously lost the BCCI election to Ranbir Mahendra – the only election he has ever lost – the contest served as political shadow boxing with the BJP and the NCP on one side and Congress on the other. Not surprising, given how many cricket associations are controlled by politicians.

This time, the gloves seem to be off even though the Congress publicly insists that there is a “Chinese wall” between politics and cricket as far as relations with the NCP are concerned. Primarily, the NCP seems to have underestimated the change in political equations since the Congress won 206 seats in the 2009 Lok Sabha election. The NCP remains a vital component of alliance governments in Maharashtra, Goa and Meghalaya but a resurgent Congress is now far less willing to put up with shenanigans. The unleashing of the various agencies of the state on the IPL and the BCCI is a clear political signal and the noises on a Joint Parliamentary Committee probe mean that there is more to come.

For over a year now, Mr Pawar’s ministry has appeared to be in a state of drift as he has tried to project himself as a global cricket statesman. Yet, in a country dealing with a serious agrarian crisis, it is ironic that it took a spat over cricket to force this latest crisis between the two parties. Nothing unites India and political rhetoric like cricket – remember how all parties united to pass the law that mandated the broadcast of cricket on Doordarshan in the “national interest”. The same notion of “national interest” now is driving the Opposition outcry on cricket. The IPL’s financial affairs have been a mess for a while now but Mr. Pawar’s decision to openly back Modi’s attack against a fellow minister despite the Prime Minister reading the riot act to Shashi Tharoor forced the issue. It may well yield a long overdue systemic overhaul of cricketing matters but it will also alter the balance of power between the NCP and the Congress.

In a Parliament session where the Opposition may bring in a cut motion, the government’s wriggling space is limited. While a diminished NCP will be under considerable pressure to make some sort of a mollifying gesture many in the Congress are relishing the prospect of its ally being taken down a peg or two. CLR James’s oft repeated line, “what do they know of cricket who only cricket know” has become a cliché but even James could never have imagined how true it would be of India where cricket is so constitutive of public culture.

The only question now is: Will Mr Pawar concur again? 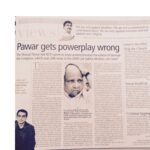