Just after the attack on Gandhinagar’s Akshardham temple six years ago, a senior general with the NSG told me quite candidly that live television coverage of the attack proved to be a blessing in disguise, allowing him to coordinate the rescue attempts better while sitting on his desk in Delhi. The NSG commandoes could not get a real-time video feed; and the television pictures, combined with continuous ground assessments from the soldiers, helped the coordinating commanders in Delhi to understand the operational topography better. The Bombay crisis was vastly different. After the first night of frenzied non-stop coverage and constant second-guessing about the “next impending assault” the channels were told firmly by the morning to hunker down and not to divulge any operational details. The hotel television sets seem to have been turned off only in the morning, depriving the terrorists of easy access to information, and in many ways the television coverage is a reflection of not just the Indian state’s response to terror but of the furious nature of change in modern India itself.

Mumbai 2008 is very different from Akshardham 2002 or the Parliament attack in 2001— channels are far more numerous, competition far more intense and most importantly the attack on Mumbai is part of an entirely different canvas. Spread out over a much wider geographic area and involving an entirely different set of variables, this new kind of terror demands an entirely different media response. With at least one television editor repeatedly rebuking his reporters on air, telling them to calibrate their reporting responsibly, we are now entering new territory in live television. This never happened even at the height of the Gujarat violence — the first televised riots in independent India — and the old rules are being swept aside by newer exigencies in an industry infamous for its sensationalism.

The coverage can be divided into two broad phases: the first one, lasting until Thursday morning, was largely one of breathless ground reporting with the channels seemingly ahead of the local police forces as they tried to make sense of multiple terror eruptions igniting almost simultaneously all over India’s commercial capital. With the ordinary policeman on the street as clueless initially as the reporter on the ground, this was the aggressive face of television news at its best, breaking boundaries and trying to make sense of it all. There were no New York-type yellow tapes here, no surgical sealing of the crime spots — journalists as much in the frontline as anyone else in an unending cornucopia of fast-moving tragedy. The long and weary night vigil gave way to a morning of steely resolve, edginess and enforced caution, with the state’s security apparatus weighing in, demarcating boundaries and assuming a semblance of control over the drip-drop of information.

It is clear that the most important front in the battle for the public mind will be fought on the airwaves. The terrorists clearly know this and understand this as a media event that they are drawing out for maximum exposure. As such, it seems that the ground rules of engagement need to change: between government and media and between media and the public. With terror now a virtually permanent feature of Indian public life, there is a greater need for training and sensitisation of reporters — and not just those working directly on security-related beats — on these issues. India could also do without the ungainly spectacle of reporters fighting over separate exclusive interviews with escaped hostages.

What the television coverage reveals most glaringly, however, is a complete lack of coordination and sense of purpose among the various organs of the state responsible for fighting terror. Television brilliantly captured the scramble and the confusion in the early hours of the crisis. The early pictures of harried officers briefing commandoes hurriedly donning their bullet-proof typified the confusion at the top and while it was great television it did not speak well of a state that should have its terror and media strategy in top gear.

Mehta is the author of ‘India on Television’ 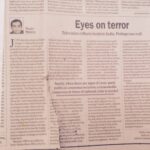