Love in Tokyo, and Delhi 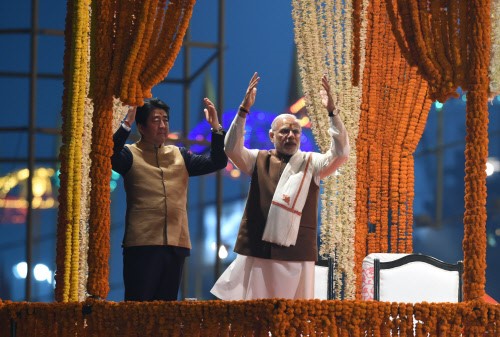 Japanese Prime Minister Shinzo Abe follows only 11 people on Twitter. Two of them are Indian: Narendra Modi and, surprisingly, Rajnath Singh. Much as Modi is trying to steer Indian foreign policy out of the cobwebs of the past, Abe is also trying bring Japan out of its post-World War II-cocoon and reclaim its strategic place as a great power, somewhat like his grandfather Nobusuke Kishi who tried the same shift as prime minister decades ago but failed.

The Abe-Modi jugaldbandi on the Dashashwamedh Ghat in Varanasi, the $35 billion offered to India by Japan and the movement towards a new nuclear deal once again underscore that these are both revisionist leaders looking not just to play the diplomatic hand they inherited but to change the game itself and their country’s place in the global order.

Both are ardent nationalists, both have China as their largest trading partner and both want to balance its military rise. While Abe is looking to change Japan’s reputation as a ‘political pygmy’ Modi is moving fast to extricate India out of the last vestiges of non-alignment and shedding its traditional strategic inhibitions to creatively open up new diplomatic spaces.

Japan permanently joined the annual Indo-US Malabar naval exercises for the first time this year and a broader Indo-Japan alliance — built on the pillars of defence and economic cooperation while balancing each country’s own bilateral equations with China and the US — holds the potential to reshape the Asian balance of power.

India is Asia’s largest democracy, Japan its most prosperous. From the 7th century Budhist monk Bodhisena who consecrated the Todaiji Temple in Nara to the deep Japanese influence on Rabindranath Tagore and Subhash Chandra Bose to Radha Binod Pal, the Indian judge on the Tokyo war tribunal who argued that Japan’s wartime leaders weren’t guilty, a Tokyo-Delhi alliance has always been a natural fit — even if both countries didn’t quite cash in on it till recently.

India-Japan bilateral trade in 2013-14 amounted to $16.31 billion (about 22.-2.5% of India’s total trade), some 3961 Japanese businesses are currently operating in India (56% higher than the last year) and Japan is already the largest bilateral donor to India.

While Abe may have exaggerated when he called the Indo-Japanese partnership the world’s “most important bilateral relationship”, there is no question that Tokyo and Delhi are embracing each other as never before.

Asha Parekh and Joy Mukherjee gave many Indians their first taste of Japan in 1966 with their silver-screen romance in ‘Love in Tokyo’ — the first Indian film set in Japan. Modi starred in the political equivalent of ‘Love in Tokyo’ when he visited Japan in September last year. Abe has now returned the favour with a visit that could be termed ‘Love in New Delhi’.

The bonding and the deals are done. Delhi must now move fast to cash in.