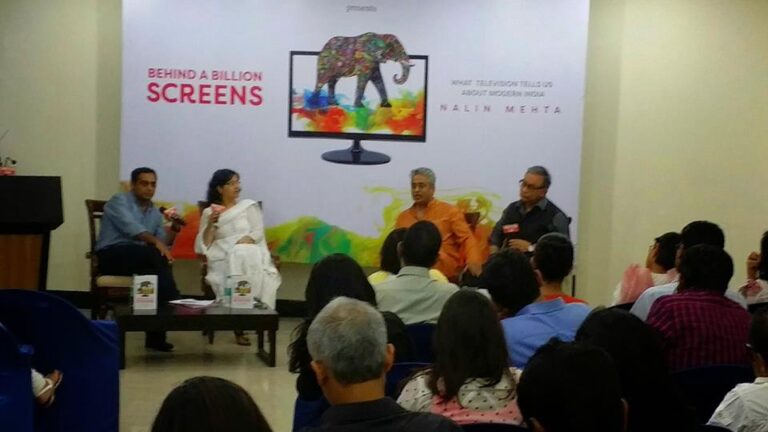 Social scientist Nalin Mehta examines the defective paver-blocks of regulations that line the pathways of Indian media, and suggests roadwork.

One of the great risks of writing about television is that like cricket, everybody watches it, everybody has an opinion on it and everybody thinks they know exactly what the solution is,” writes Nalin Mehta in his prologue to Behind a Billion Screens. This certainly proved true at the launch of his book when journalist, Rajdeep Sardesai’s fatalistic view on both the news and entertainment industry ignited a heated debate. Though Mehta’s book is a systemic analysis of Indian media and what brought it to its current state – where talent’s lost in a lattice of hackneyed, uninspired storylines and farcical “bhoot ka phone number” news reports – it also offers the promise of hope. Mehta, for instance, points to the success of Tamil Nadu’s Puthiya Thalaimurai (Generation Next), a channel determined to deliver, “boring” stories, “impartial news in undertone,” and shows like Satyamev Jayate.

At the book-launch in Delhi on Friday, however, an unconvinced Sardesai credited the success of the Aamir Khan show to star power alone. Somewhere amid all of this, Prasar Bharati’s Jawhar Sircar did all he could to fend off criticism about the state of Doordarshan alternately blaming the bureaucracy and a lack of funds. When Sircar argued, “People pay lots of money to watch the BBC, what do we pay?” media specialist, Vanita Kohli Khandekar responded with, “We pay taxes.”

Excerpts from an interview with Mehta:

What do you hope to achieve with this book?

It’s a time when everyone has an opinion on the media and everyone is debating it – last week there were the #GohomeIndianmedia tweets from Nepal, previously Arvind Kejriwal had talked about trials by the Indian media and recent debates have centred on TRAI’s recommendations on crossmedia ownership and net neutrality. But, much of this debate happens in a vacuum of real information and understanding. My attempt was therefore, to inject information and data into the discussions, to try and lift the quality of the discussion or try and restart qualitative debates over the issues and predilections of the industry.

You say there’s a tendency to merge myth and religious fervour with reportage in a race for TRPs. Sensationalism is not the ideal tool, sure, but if the goal is growth of the industry, isn’t it an effective one?

Absolutely. The challenge for media anywhere in the world is to find the golden mean, to be profitable yet credible. The trouble is that of 800 channels here, over 400 offer news and many are being run as extortion rackets. There are some good quality channels out there but the business model of news channels is so shaky that it’s leading to a race down to the bottom in a quest for ratings. And, this is actually cutting them (news channels) off at the feet because people are losing faith in them.

With media’s loss of credibility, what do you think is needed for a climb back to grace?

In a country where 400 news channels broadcast in 15 languages, the real change is happening in the sphere of regional languages. When we speak of Indian media, we generally talk about Arnab and AajTak, but they constitute a very small percentage of what’s happening. At the regional level, the problem is very acute: many news channels operate as fronts for political operations. The problem is not capacity, nor is it that these operators lack tools or training. The problem is their very intent. As a first step, we need to implement the long-standing TRAI recommendations that bar political entities from entering the field. The second issue is about corporates taking over news. Historically, almost every major media group has been owned by companies that own other businesses, so I don’t necessarily see that as a problem. It’s important to tell the public who owns what channel and there must be some sort of mandatory disclosures. But, political involvement in this area must simply not be allowed.

Which policy do you think has proved most detrimental to the healthy growth of the industry?

The TRAI cap of Rs 5 on TV subscription rates imposed in 2000. Even the price of onions is not capped, and this is a country where the Delhi elections were once lost because of the price of onions…Regulating TV prices goes against the principles of a free market. Besides, it forces channels to reduce content.

I know of a leading TV network that wanted to initiate a health education channel for rural women, but to make it viable – with no advertising – they needed to charge higher subscription fees. So, they asked to be exempt from the price ceiling but were denied permission and told they could do this in HD, which has no price controls. But, who has HD TV in villages?

What’s the future of news broadcasting in a country where there’s a demand for both, “freakish” news as well as nuanced, thoughtful reports?

BARC shows that the number of English news viewers in India shrunk from .07 per cent to .04 per cent of the overall TV-watching universe. Even within English-watching households, news is watched by 2 per cent in Delhi and just about 5 per cent viewers in Mumbai. This demonstrates a shift – the elite are turning to languages of their own choice. Plus, even people we’d usually think of as news junkies are now getting news from the phone so the very nature of how news is being consumed is changing. Digitising may create a marketplace for trolls and innuendo, but it also puts a premium on intelligent opinion and analysis. So we, as Mass Media may bear witness to a historical aberration – we may be headed back to the 19th Century where everyone was a pamphleteer and people selected one to stock faith in.

behind a billion screens television TV and politics
Share. Facebook Twitter Pinterest LinkedIn Tumblr Email
Previous ArticleHas UGC run its course?
Next Article How a book launch set the stage for a fight between private and public television