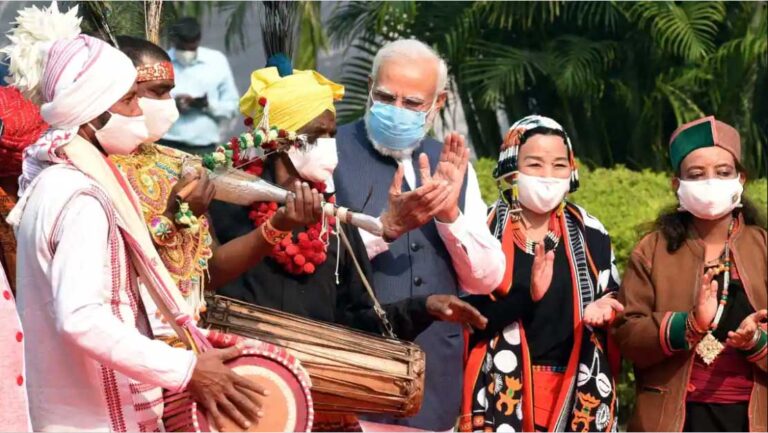 Prime Minister Narendra Modi with tribal artists at Parliament House in New Delhi in November 2021. Modi offers his supporters the vision of a radical break with the past and of a future new Bharat, says a new book. (Arvind Yadav/HT PHOTO)
Share
Facebook Twitter LinkedIn Pinterest Email

[Prime Minister Narendra] Modi’s political ascendance, and what it means for India, is as impactful and far-reaching as the political imprint left by the country’s first prime minister, Jawaharlal Nehru. Modi may be the mirror opposite of most things Nehru stood for, but in terms of impact, the tectonic shifts he has heralded in Indian politics are Nehruvian in scale. So deep and wide-ranging is the societal impact of Moditva that, of all Indian prime ministers, he can be compared with only Nehru.

This may seem like a strange comparison to make. Nehru, after all, is the most reviled name in the Indian Right’s political lexicon. He is often lampooned as soft, wimpish and placatory, as opposed to Modi, who embodies, for his political supporters, strength, manliness and resoluteness.

So, what are the similarities? At a fundamental level, just as Nehru created the Nehruvian order—championing a new idea of India as a modernist, reforming and rights-based society after Independence, one that came to be accepted by both the elites and most mass voters as the dominant narrative of what it meant to be Indian—Modi’s two successive national electoral triumphs in 2014 and 2019 embody an alternative idea of India: soaked in a hard nationalism and an unapologetic espousal of Hindu identity wrapped within the idea of a more efficient welfare-focused state.

Ideationally, Indira Gandhi did not represent a radically new narrative of the nation from her father’s. She inherited the Nehruvian template on secularism and socialism but significantly altered it by centralising power as part of a hard-nosed realpolitik approach. Indira’s India, in many ways, was a negative mutation of Nehru’s foundational ideas of the Indian republic. It hard-coded into the earlier ideology of developmentalism a new socialist rhetoric, an insidious leadership cult, the principle of dynastic succession in politics and a severe reduction of inner-party democracy. It may, in practice, have hollowed out and made redundant many of the key principles of Nehruvian India—but it did so in the name of those same ideals. Indira did lead India to victory in the 1971 war, which reshaped the map of South Asia. Among her other achievements, she also heralded the drive to food self-reliance with the Green Revolution. On balance, though, her record, which included the imposition of the Emergency, is chequered. Her political positioning was always framed within a narrative of continuing the legacy of Nehru’s India. Other Indian prime ministers, Congress and non-Congress, had vastly differing approaches to governance, but in terms of big ideas, they too largely worked within the same broad framework of nationhood that was formulated at Independence. They did not upend it.

The Modi era, by contrast, represents a radically different attempt at a moral reordering of the nation. In another era, Nehru too single-handedly went against the dominant thinking in the post-Gandhi Congress, led by party satraps who were steeped in Hindu traditionalism, to frame the first Indian election primarily as a contest between what he called ‘communal organisations’ like the ‘RSS and the Jan Sangh’ and the forces of progress. He framed communalism as the ‘foremost question’ before the country in that election, at a time when the Jan Sangh had been born only four days before voting started, the Hindu Mahasabha had only recently turned into a political party and the RSS was not contesting elections. The major Opposition parties of the time were not Hindu nationalist; they were socialist. The Jan Sangh only won 3 per cent of the votes in 1952, the Socialist Party 10.5 per cent and the Kisan Mazdoor Praja Party 5.7 per cent.

I reconstruct the politics of independent India’s first election in 1951-52 to show that Nehru defined his position in this manner not necessarily because he thought that the Jan Sangh was politically strong—it was not—but because the ideals it represented enjoyed deep support within the Congress leadership itself, specifically on the question of the Hindus who still remained in Pakistan and the Nehru government’s policies towards them. After Jan Sangh founder Syama Prasad Mookerjee’s exit from the Nehru cabinet to form his own party, the objections he raised to Nehru’s policies on Hindu cultural grounds19 enjoyed such support within the Hindu-traditionalist wing of the Congress that it led to the most serious internal challenge that Nehru faced to his own leadership until the Sino-Indian War of 1962.

This challenge was exemplified by the stunning election of Congress’ UP chief Purshottamdas Tandon as Congress president on 2 September 1950, when he defeated Acharya Kriplani, whom Nehru supported. Not since Mahatma Gandhi took on Subhas Chandra Bose after his victory as Congress president at the Congress’s 1939 Tripuri session had the party seen such a schism at the top. Tandon’s elevation was specifically seen at the time as a signal from the Congress to Nehru for a ‘reorientation of policy’, especially on ‘India–Pakistan relations’, ‘refugees’ and ‘propagation of Hindi’. Nehru responded by asking his party for a renewed mandate on his Pakistan policies and the ‘communal question’ in a specially convened Nasik session of the All India Congress Committee (AICC) on 21-22 September 1950.