BANGLADESH AND THE ’71 END-GAME

HomePolitics & Current AffairsBANGLADESH AND THE ’71 END-GAME 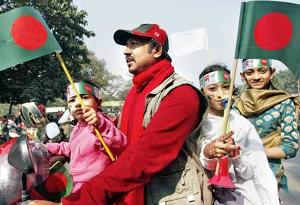 It must count as one of the most memorable messages ever to finish a war. As he entered Dhaka on the morning of 16 December 1971, Major General Gandharv Nagra sent his ADC with the adjutant of the 2nd Paras, the first Indian battalion to have reached the city, to the Cantonment with a truce flag and a message for the Pakistani general, AK Niazi: “My dear Abdullah, I am here. The game is up. I suggest you give yourself up to me and I will look after you.” Nagra had known Niazi from his days as a military advisor to the Indian High Commission in Karachi and on that December morning in Dhaka the game was indeed up.

At 4.31 pm that evening, Niazi formally surrendered to the Indian Army with 93,000 Pakistani troops; the two-nation theory was, once and for all, discredited; Pakistan was cut into two and the birth of a new nation had been midwifed.

Forty years after that heady day in Dhaka when Sikh and Gorkha soldiers danced with delirious Bengalis to the chants of ‘Joi Bangla’, much has been written about how India won the war but lost the peace, about how Zulfiqar Ali Bhutto outwitted Indira Gandhi at Shimla and how 1971 became the justification for a new phase of Pakistani aggression starting in the late-1970s and the dagger in the hearts of an entire generation of humiliated Pakistani Army officers right down to Kargil (this was how Musharraf justified it at his famous breakfast meeting with editors in Agra).

The Pakistani reaction would not be surprising to anyone familiar with the history of warfare (you only have to think of Versailles) but what about Bangladesh? Bangladesh was born as a reaction to Pakistani high-handedness, its Mukti Bahini received life-giving succor in India and the new nation aspired to be precisely what Pakistan was not: a secular nation not defined by a nihilistic drive to be the anti-Indian Other, a nation bounded by Bengali-ness and language, not one limited by the tentacles of religious identity politics.

Yet, within ten years of its creation Bangladesh was to turn into a virtual mirror-image again of Pakistan. Beginning with the assassination of Mujibur-Rehman in 1975 which saw the return of the Army and religious forces that had opposed break-up with Pakistan, Bangladesh, despite a semblance of democracy under General Ershad in the late-1980s, was condemned to remain largely under the thumb of the Army until its first truly free election in 1991. The secularism enshrined in its new constitution after the 1971 war was removed in 1977 by General Ziaur Rahman and Army rule, like in Pakistan, went hand-in-hand with the growth of political Islam.

Only in recent years have the courts turned the clock back with the Bangladeshi Supreme Court in February 2010 repealing the notorious Fifth Amendment to the country’s Constitution that had legalised the martial law of the 1970s and the deletion of secularism from its pages, arguing that it had “destroyed one of the basis of our struggle for freedom and also changed the basic character of the Republic.”

In March this year, exactly 40 years after the Pakistani Army massacres that began the militant phase of the resistance and culminated in the creation of Bangladesh, a senior Bangladeshi cabinet minister in Dhaka recounted to me in stark detail his ghastly memories of March 25, 1971, the day when the Pakistan Army began its infamous Operation Searchlight. It was designed to crush Bengali nationalism in the major cities but instead ignited a revolution. The memory of those terrible massacres is still a haunting presence for this generation of Bangladesh’s leaders; all the more reason why the trajectory of its politics since 1971 has been so perplexing for India, until Sheikh Hasina’s decision to re-engage with New Delhi, that is.

Despite cultural affinities, extending a hand of friendship to India still carries political risks in Dhaka. This is why Sheikh Hasina’s minders cancelled her planned trip to Kolkata after her historic “transformational” visit to New Delhi in January 2010, arguing that even a 24-hour delay in returning to Dhaka and explaining her position would allow the Opposition to paint it as a sellout to India – as indeed the BNP did.

The strategic case for India’s re-engagement with Bangladesh is obvious, but so is the economic argument. The North-Eastern states bordering the tribal districts of Bangladesh and the border districts of West Bengal were economically tied at the hip with those on the other side before Partition. Both were hit badly by the rupturing of trade linkages. At 4,096 kilometers, India’s Bangladesh border is its largest and both countries share as many as 54 rivers.

This is why Mamata Bannerjee’s brinkmanship in September over the sharing of the Teesta and the Feni may have won her some local brownie points but was terrible for India’s strategic interests. It took the sheen of the paradigm shift that Manmohan Singh was hoping to seal in Dhaka with Sheikh Hasina.

These are the building blocks of a new partnership but make no mistake, the game that started in Dhaka in 1971 is by no means over.