Sanjay Sinh is Congress Rajya Sabha MP from Assam and scion of Amethi’s former ruling family. Sinh spoke with Nalin Mehta on his property dispute with son Anant Vikram Sinh, the violent clash over Amethi’s palace recently claiming a policeman’s life, demands for a new probe into Syed Modi’s murder — and churning within the Congress party:

Why has this property dispute re-erupted suddenly, many years after your second marriage?
This dispute never happened before, so it has not re-erupted. It is shocking for me too because he is my only son. He’s influenced by wrong people who’ve led him astray.
By wrong people, do you mean political opponents or someone else?
They’re wrong people — whether they’re personal or political opponents. They think wrong, act wrong and do wrong.

Your critics demand the Syed Modi murder case against you be reopened now — your response?
This is a case from 1988. It was discharged from the lower court, then high court and followed by a discharge from the Supreme Court. Not a single charge could stand up before a court of law — i was not acquitted for lack of evidence. Nobody in 26 years ever suspected the court’s judgment or asked for opening of court cases.

Your son is asking for a CBI probe?
Only my son and ex-wife are asking for reopening of the case now for the first time. They are ill-informed — if they don’t believe in the courts, then what can i say?

Your critics say the state government is unfairly supporting your claims against those of your son’s — your response?
As a father, i am every inch the owner of everything i own. As a father, i have done everything required as a family man — good education to children, marrying my daughters, looking after grandchildren. Our system is of inheritance and i inherited everything from my father. There is a process which has to be followed — i don’t see why Anant should be insecure. This is the procedure we follow and it cannot be accelerated. He is getting wrong guidance.

Meanwhile, your party’s facing turbulence too — you were close to Sanjay Gandhi. How do you compare Sanjay with Rahul and Sonia Gandhi?
I started with Sanjay Gandhi and he was far-sighted and dynamic. It is incorrect to compare leaders, especially in a family. Sonia Gandhi has great patience and enduring capacity to keep a 125-year-old party together. Rahul has great ambition and is a combination of Rajiv and Sanjay — the soft and far-sighted approach of his father and the will and determination of his uncle.

Doesn’t Rahul need to change tack completely?
He has his own vision to foster internal democracy and wants to put internal democracy before electoral fortunes — the argument is whether this will be enough or should we put election victories first.

Doesn’t Congress need a complete reboot?
We do need a reboot and change of tack because a party of, by and for the people cannot be static — it has to be accountable to people.

Is there a tussle between Congress’s old and new guard?
I don’t think so. There was similar trouble after 1977′s debacle. Whenever this kind of churning happens, it becomes a talking point in every galli, home and tea stall. This kind of debate is a must. Only a churning can lead to change. 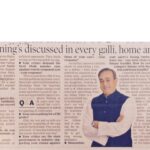