The BBC’s John Simpson once wrote deprecatingly about the worst kept secret in foreign reporting: the propensity of some overseas correspondents to read the local newspapers and then to pass off the second-hand news as their own to unsuspecting editors back home. The omnipotent tentacles of the internet have put paid to such lazy luxuries. Indeed, if the evidence of the foreign coverage of the great Indian election tamasha is any indication, it has greatly diminished the grand institution of the foreign correspondent itself. Once the most romantic of journalistic vocations, the foreign correspondent is a fast disappearing species in the recession-hit newsrooms of the world and the global coverage of poll 2009, therefore, is qualitatively very different from previous elections, in form as well as substance.
Routine affair
Let us examine the salient trends emerging in international media narratives of India. Firstly, Election 2009 is a big story — one worthy of being turned into a major news event — only for the British, the Middle-Eastern and the South Asian press. It is not that the American press is not covering the Indian election. It is. Newspapers like the Washington Post and the New York Times have journalists reporting from India on a permanent basis and elections in the “Asian giant” — as Fox News put it — are being covered, albeit only as a routine event. There are no special websites, no special in-depth initiatives and no special resources, judging from the coverage, being allocated to the greatest election in the world. This is a marked contrast to the manner in which the Indian press covered the US presidential election.

Very broadly speaking, the American press has never really been big on non-US specific international news, it is far too pre-occupied with terrorism and the disturbances in Pakistan and the recession is taking a heavy toll on the media industry. Even CNN International, which devoted vast resources to cover the 2004 Lok Sabha election, has steered clear from a repeat exercise in 2009 although, in their case, the reasons are different. Its parent company, Time Warner, has invested money in CNN-IBN and they take footage and stories from the Indian partner. In political terms, Australia has usually followed the US line and, at the risk of simplification, the Australian press too is following a similar trajectory. The coverage in both countries has largely been relegated to events-based reporting: the voting schedule, the violence in the elections and an odd story on the “Gandhi grandson”, as Varun Gandhi is referred to in most international stories.

British affinity
The media are often a useful mirror to reflect a society’s primary concerns and the geographical breakdown of the coverage of India is one way of looking at just how interested the world is in India. The second indicator is the kind of coverage that is being dished out. The economics of media have combined with old historical linkages to mean that the British press has by far been the most focused on the travails of Indian politics. The BBC has taken a cue from NACO’s Red Ribbon Express that went around the country last year with the message of HIV awareness, to launch its own election train, complete with special BBC branding. There is also an echo here of NDTV’s election bus, except that the BBC train is a far bigger initiative and far more complex in its logistics. Nothing catches the pulse ofIndia like a train journey and while some of the reporting could have been better researched, the Beeb has to be commended for its vertical integration.

The BBC train is being used for reporting in at least ten of its language services — including Swahili, Arabic, Persian and Vietnamese — and its journey is being tracked in detail on its online platforms as well. So why is the BBC so interested? Its managers have taken a clear call that India, with the world’s third largest television market, is the place to focus on and the vast money being invested here is a direct result. Combine this with Britain’s own large ethnic base of South Asians and it explains why this is the BBC’s biggest such initiative for any foreign election, besides the US.

A key feature of its online coverage is a heavy reliance for analysis on Indian experts — historians, political scientists and economists — a fact that gives the coverage depth and authenticity. This is a pattern that is also seen in the Guardian’s coverage, for instance. Its special Indian election portal is full of detailed commentary, with themes like Naxalism, the urban-rural divide, security concerns, the decline of big parties and the rise of regionalism featuring prominently. It is a welcome break from the gee whiz! kind of reporting that characterised the 2004 campaign. The coverage then was focused too much on the discovery of India as an emerging economic power and the rise of call-centres: in short, it bought in too much into the India Shining kind of discourse. Back then, for example, the BBC’s showpiece had been a series on India’s modern business maharajas, followed by one called ‘India’s global ambition’. This time the reporting is much more grounded, and focused on issues at the heart ofIndian democracy.

This does not mean that all of the British reporting is necessarily well informed. The Times, as is its wont, snootily looked down two weeks ago on the absence of a clear Left-right divide between the BJP and the Congress: “They offer no rival visions for India’s place in the world, no completing plans for the economy, no serious differences on social policy. The world’s biggest democracy means little without a clear choice.” The Times would do well to reflect on how Tony Blair’s New Labour virtually erased the differences between old Labour and the Tories. In fact, the broad convergence between the Congress and the BJP on the economy, national security and foreign policy — beyond the pulls and pressure of competitive rhetoric — is actually a sign of a maturing polity.

Let us turn now to media coverage in the global south. Al Jazeera takes the vote here with finely balanced in-depth coverage by its reporters. Again, Indian experts feature prominently, on its specialIndia election website, focusing on the broad themes at stake. The only difference here is that issues related particularly to Muslims — the state of the minorities, Gujarat, Narendra Modi — are moresalient, just as they are in the Pakistani press. As a case in point, three of the five articles listed as highlights in the Dawn’s India portal are focused on the political legacy of the 2002 riots. The rise of Muslim political parties, nearly double the number from 2004, is also of great interest in some Pakistani newspapers.

Net presence
The final piece in the media matrix is online search engines and commentary in blogosphere. Unlike the mainstream American press, both Yahoo and Google have invested heavily in the elections. Both have created new portals and Google has come out with an innovative report card on candidates and constituencies. Again, unlike traditional media, both these companies know which side their bread will be buttered. The fast-growing reach of the internet in India offers a huge market and hence the deep focus. This market is clearly nowhere near maturity though — a lot of discussion in the non-big media online sphere has been about the marked contrast in the use of new media between the US and theIndian elections. As a British media consultant noted on his website, Barack Obama had 9,22,063 followers on Twitter (21/04/09) “but no single Indian politician has created a sizeable online following.” According to this website’s count, Advani has 715 supporters on Facebook, and Rahul Gandhi 3,252. This, of course, is because, internet penetration, though big in numbers, is still very low as a percentage of the voting population.

Covering the 1967 election, Neville Maxwell famously declared in The Times that India’s fourth general election was “surely” its “last” and that “the great experiment of developing India within a democratic framework has failed”. Forty two years later, the great Indian experiment is more than alive and well.

What has disappeared is the lofty tone adopted by some foreign correspondents, accompanied with a gradual understanding that India is far too complex for any kind of sweeping generalisations.

The writer is the author of India on Television and Fellow at La Trobe University, Melbourne 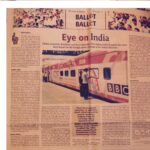