A GROWING POLITICS OF INTOLERANCE

It has not been a good week for liberal India. The Headlines Today office was brutally attacked by goons in Delhi; Zee 24’s studio was raided in Kohlapur, pro-Kannada activists being roughed up for expressing their views on a live show; and the political melodrama over the James Laine book has now gone to absurd lengths. Cutting across the ideological divide – from the RSS to the Shiv Sena to the Congress-NCP government in Mumbai — all these have one thing in common: intolerance for alternative points of view and contempt for the liberal notion that freedom of expression is sacred.
Ordinarily such incidents could be dismissed as that of a loony fringe, out of touch with the mainstream, but the pusillanimous politics we have seen from both the Congress and the BJP over the past week suggests otherwise

The cussedness adopted by the BJP’s spokespersons in the immediate aftermath of the Headlines Today attack seems to suggest an erasure of the normal dividing line between its moderate liberal face and the extreme fringe. Judging by their public statements, there has been a virtual identification with the attack and the suggestion seems to be that the network essentially brought the violence upon itself.

The mirror image of this is the response of the Congress-NCP government in Maharashtra to the Supreme Court’s judgment on the James Laine book. If even the cursory disclaimer about protecting the freedom of the press was missing in the BJP’s initial responses to the Headlines Today attack, the Ashok Chavan government has dispensed with the usual disclaimers about respecting the judiciary in its cynical reaction to the Supreme Court’s verdict. Instead, the ruling combine, fearful of the Shivaji issue being milked by the Shiv Sena and the MNS, has led the political consensus in the state to defy the Supreme Court’s decision to lift the ban on Laine’s book.

“My sentiments cannot be different from those of my people in Maharashtra,” says Mr Chavan, as his government mulls over a new law to prevent defamation of iconic personalities. Ironically, this is exactly the language used by the then police commissioner of Ahmedabad when his city burnt in 2002.

“The police are also a part society and cannot be distinct from the general sentiment,” he had said helplessly on television then. It may be a stretch to even mention 2002 in the same breath as the Shivaji conundrum but the point is that it is the job of leaders to lead and shape public opinion as much as to respond to it. It won’t do to be just swept along helplessly.

Shivaji is an emotional icon for Maratha pride but in the political scramble around his name, it is probably an even bet that many of those decrying the Laine book may not even have read it. The key is that in any literary or scholarly work, as the Supreme Court pointed out, the state “cannot extract stray sentences” to impute meaning. It must be read as a whole and the intention of the author judged accordingly.

In some ways, the Laine case is a test repeat of the Ashis Nandy case two years ago when the social scientist was prosecuted for writing an article about the Gujarati middle classes and the 2002 riots. Back then too, the Supreme Court had upheld the sanctity of ideas in the public sphere, arguing that the prosecution smacked of intolerance.

We make a great deal about India being the world’s largest democracy but the fact is that the moderate space for dissent may actually be shrinking in our increasingly intolerant society. Publishers normally like controversy. Remember how Jaswant Singh’s book on Jinnah benefited from the controversy it created. But the reported statement by Laine’s publishers that there are no plans for reprints may be a sign that though the Supreme Court has upheld the law, the intolerance brigade may already have won.

After independence, Nehru went out of his way – despite a life-long history of political animosity – to back Ambedkar as the architect of the Constitution and then appointed him Law Minister. Even when Ambedkar quit the government and subsequently lost a Lok Sabh election to the Congress, historical records indicate that Nehru quietly encouraged local Congress bigwigs to help his eventual election to the Rajya Sabha election from Mumbai. Though Ambedkar’s views were anathema to much of the Brahmin-dominated Congress, Nehru recognised the value of protecting alternative points of view in a liberal polity.

Nehru understood the importance of ideas. Now if only his political descendants in Maharashtra could take a leaf out of the great man’s book. 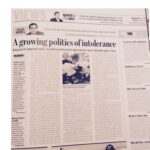