Had Begged Saina Nehwal Not To Leave My Academy: Pullela Gopichand; Did Prakash Padukone Play Foul? 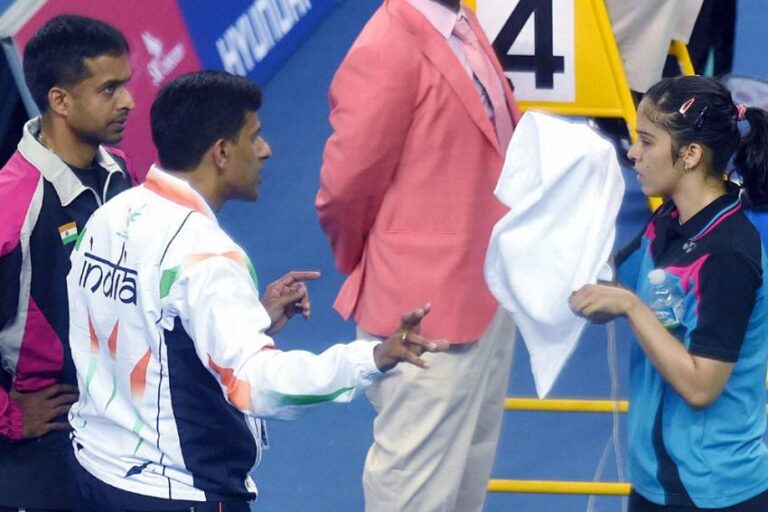 In Dreams of a Billion: India And The Olympic Games, a book authored by historian Boria Majumdar and journalist Nalin Mehta, Pullela Gopichand has for the first time reacted on Saina Nehwal deserting his academy for Prakash Padukone’s after the 2014 World Badminton Championships in Denmark

It’s never easy to be a coach, especially when you have a pair of superstars pupils. In a recent interview with Outlook, Yohan Blake, the world’s second-fastest man, expressed his anguish when he was repeatedly denied the opportunity to challenge his Jamaican training partner Usain Bolt. Blake, the youngest ever 100m world champion and Bolt, an eight-time Olympic gold medallist and 100m world record holder, had a common mentor – Glen Mills.

Even though they ran frequently in the Jamaican relay team, Blake’s relationship with Bolt was anything but cordial. It was eloquently clear in the way Blake, who is targeting the 100m gold at the 2020 Tokyo Olympics, spoke about Bolt, whose final race at the 2017 world championship denied Jamaica the 4 x 100m relay gold. Blake now has a new coach and probably felt betrayed that Mills never let him become the sprinter that he really was. “I was born at the wrong time,” Blake would say.

Pullela Gopichand has probably faced similar situations when he trained Saina Nehwal and PV Sindhu at his Hyderabad academy. Sportspersons are fiercely emotional by nature. In individual sports like athletics, badminton and tennis, possessiveness is like a double-edged sword. Every top athlete, who share a coach, has lived with it. Gopichand faced, felt and withstood it. In Boria Majumdar and Nalin Mehta’s book Dreams of a Billion: India And The Olympic Games, the former All-England champion and current national coach has for the first time spoken about his feelings when Saina Nehwal deserted his academy in 2014 to train at Prakash Padukone’s in Bangalore.