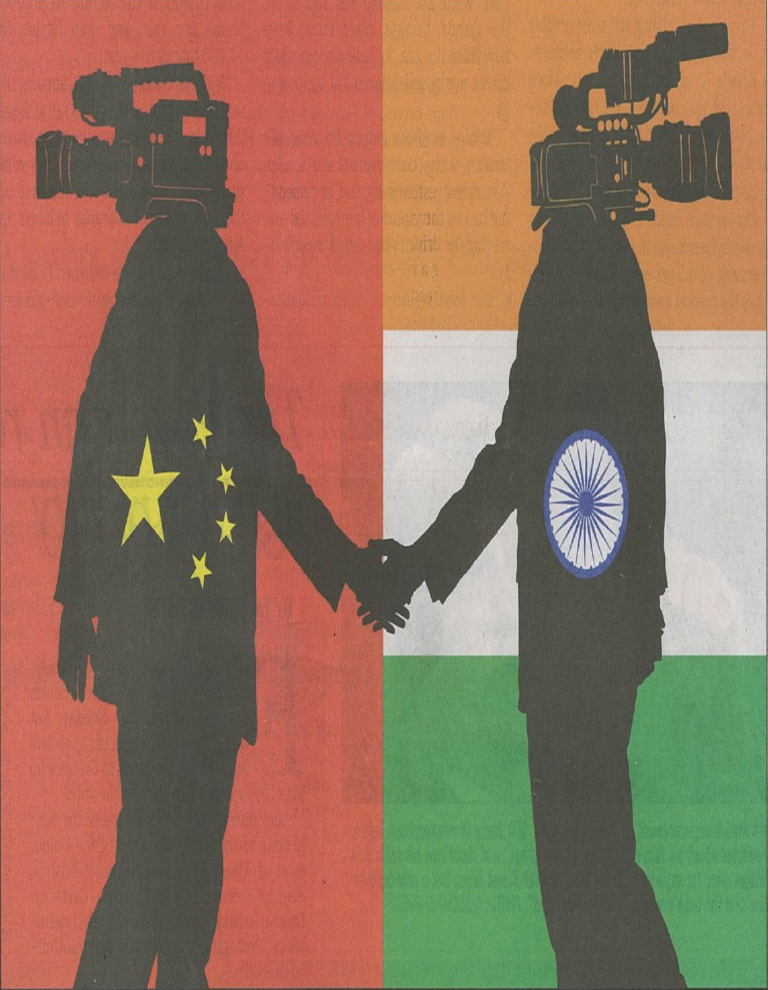 India and China are doing better at reaching understanding on the ocean waves than the air waves.

While their navies are talking to each other, their media organisations encounter each other’s country with the astonishment of a panda bumping into an elephant on a dark night.

Ten months ago, Indian and Chinese navies were muscling up to each other in the South China Sea. But last week, a Chinese training ship docked at Kochi in south India as part of a round-the-world voyage. It had an Indian cadet on board. Later this month, four Indian ships will call at Shanghai.
The sailors seem to have found it easier to get to know each other than the media have.
Three years ago, following jumpy Indian media coverage of “incursions” on the disputed border with China, India’s National Security Adviser went on television to cool drum-beating Indian media with a warning that “if this thing goes on like this, someone somewhere might lose his cool and something might go wrong.”

But not much has happened since to raise editors’ understanding of each other’s country and media setup, though officials seem to slowly perceive the gap. In the past two months there has been talk of setting up an Indo-China Media Forum and regular exchanges of journalists.
Zee TV, an Indian channel, has been given rights to broadcast into China, just as CCTV got the nod from India in 2008. But for countries with pulsating media industries constituting the world’s largest media markets, the process is glacial.

Both countries’ media are in flux. Organisations are in fierce competition and struggle to stay ahead of rapid change. Their day-to-day concerns, related to ratings, advertising, content and regulation, pose problems for international relations and questions about the future of media.
In India, a sentiment prevails that every Chinese media outlet has its strings pulled from Beijing. In China, Indian media seem out of control yet deliberately trumpeting a hostile, official line.
Such approaches have serious consequences for daily diplomacy. An episode at a conference in Shanghai in 2005 illustrated this problem. An Indian television executive showed programmes his channel had made during local government elections in West Bengal. In spite of the opposition of the state government, the channel hired a sports field and invited the candidates and an audience of thousands for a live debate.

This was explosive, unruly and very watchable TV with lots of shouting, fist-shaking and demands for the microphone. Chinese participants at the Shanghai conference shook their heads in disbelief. How could a sensible government tolerate such an invitation to anarchy?
Similar puzzlement continues today. On the Chinese side, the stunning diversity of Indian media is barely grasped. Over 100 million daily newspapers hit the streets in India each morning in 13 major languages and 11 different scripts. Unlike most of the world, daily newspaper circulations in India continue to grow.

More than 50 per cent of newspaper circulation now is in Hindi, the official language, and another 15 per cent is in English. But Oriya, the language of the “backward” eastern state of Odisha, generates 3.5 million newspapers a day; Marathi and Telugu, more than 6 million newspapers each. Such numbers exceed those of countries like Canada or Australia.
This diversity of languages has encouraged diverse ownership. There are more than two dozen substantial newspaper-owning families in India, each with its own pet projects and ambitions.
Other family firms have got into television. India has more than 800 private satellite channels operating in all of its major languages, more than 400 of which broadcast news. Many of these lose money, but the status that comes with having one’s own television voice is hard to resist.
Though Chinese media must survive the Communist Party and government’s scrutiny, they are more diverse than Indian commentators give them credit for.

Cities and institutions run newspapers and TV stations. This allows coverage to be calibrated. In the recent fracas with the United States over blind dissident Chen Guangcheng, it was pointed out that Beijing Daily, not one of the national outlets, took the lead in berating US authorities. Similarly, observers note that what gets broadcast internationally from China may be unavailable in China itself.

China also has over 100 million newspapers circulating daily and its media outlets, as in India, now depend on advertising, not government grants, to pay their bills; but government agencies appoint editors and publishers. Simultaneously, China’s publishing and distribution industry has more than 44 listed companies.

Indian media and policy makers are only starting to comprehend the immense investment in global media that China is undertaking. Where Indian media organisations keep only a handful of foreign bureaus, Chinese media have gone worldwide with foreign correspondents from news agency Xinhua and other organisations based in more than 100 countries.

India has not begun to harness the power of its growing television industry, in spite of the fact that private Indian channels have developed strong global audiences among South Asian diasporas.

Both India and China struggle to understand and tame the social, or new, media that stream from cell phones and computers each day. The ability of the cheap cell phone to turn any individual into a broadcaster means that the state has to work hard to monitor and control citizens.
China expends vast efforts in this task. In India, New Delhi has had inconclusive contests with Blackberry, Facebook and Google to gain access to codes and sources in the name of fighting terrorism.

China and India could contribute significantly to each other’s progress and prosperity; but such happy prospects will only open up when their media begin to report on each other’s countries with greater persistence and discernment.