Kiren Rijiju: It’s not a question of regret on pellet guns, it’s a reassessment and nothing definite till decision is taken 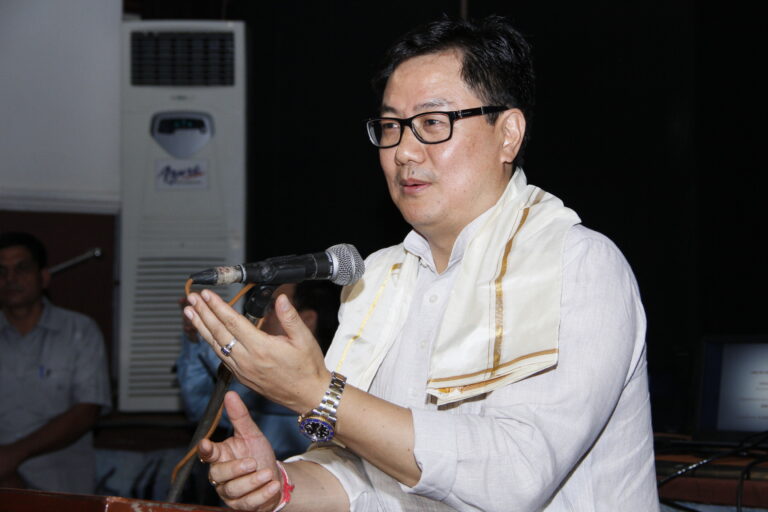 With fresh violence flaring up in the Kashmir Valley, which remains tense for the 66th consecutive day, Union Minister of State for Home Affairs Kiren Rijiju spoke to Nalin Mehta and Sanjeev Singh about the government’s evolving Kashmir policies, the possible replacement of pellet guns, Chinese incursions in Arunachal Pradesh and the controversy over FCRA approval for Islamist preacher Zakir Naik’s foundation:

Is the union home ministry clamping down on funding of Kashmiri separatists?
There is a lot of speculation, discussion and concerns from all sections of society and it is understandable. It is not proper for the government to spell out what we will do till we reach a position. The government has taken on board the views of the all-party delegation. Various efforts are being made but it will not be wise to spell out a particular direction.

While the political process is on, there is a view that the state should use all the means at its disposal to regain control. Your views?
Exactly. In this kind of difficult situation, no possibility can be ruled out.

Your government has agreed to replace pellet guns. When will this be operative?
A committee in the home ministry was constituted and went through the details. We have to contain a difficult situation and simultaneously ensure that innocent people, misguided youth and human rights are also taken into account. Any decision will be based on rationality. We have to take all positive stakeholders along and are hopeful that good sense will prevail on everybody.

Does the government regret using pellet guns?
It is not a question of regret because they were used in the 2010 violence when maximum deaths took place. The government of that time also had to resort to pellet guns.

You are not putting a timeline but is it fair to say that pellet guns are being reconsidered?
It’s a re-assessment and nothing can be definite till a decision is taken on using pellet guns. The process is on.

How serious were recent Chinese incursions in Arunachal Pradesh?
Due to lack of delineation on the ground, scuffles did take place in a couple of areas but they finally went back. On the face of it, there were issues on the ground but it did not amount to them staying put inside our territory.
We are very firm. We don’t want to create problems with neighbouring countries, nor do we allow them to create problems. There is status quo. We are hopeful that China and India would be able to settle our boundary issue which is a colonial leftover. Our PM has shown great leadership. Presently there is no crisis on the ground.

What is the progress on fencing the Bangladesh border?
We are committed that by early 2018 we will finish the entire border fencing with Bangladesh. We are also fortunate that the present regime in Bangladesh is very cooperative. There are difficulties in some areas with land acquisition. We have no shortage of funds but land is a state subject. There are certain areas like reserve forests, wildlife sanctuaries and rivers where physical fencing is not possible for which we are bringing in technological solutions.

On FCRA (Foreign Contribution Regulation Act) clearance for Zakir Naik’s NGO, why did it take so long to take action?
Things in the foreigners division were not very robust before us, especially on FCRA where thousands of organisations registered under FCRA were getting money. There was not much effective regulation and the system was not very smooth. We created a robust system and streamlined the whole process.
Naik’s foundation is also one of those which used to receive regular funding. There was no detection of problems but obviously once a case was registered, then the registration is not liable to be renewed. There was a mistake on the part of officials in home ministry. It was a big error. Once there is a legal case, automatic renewal was illegal till cleared.