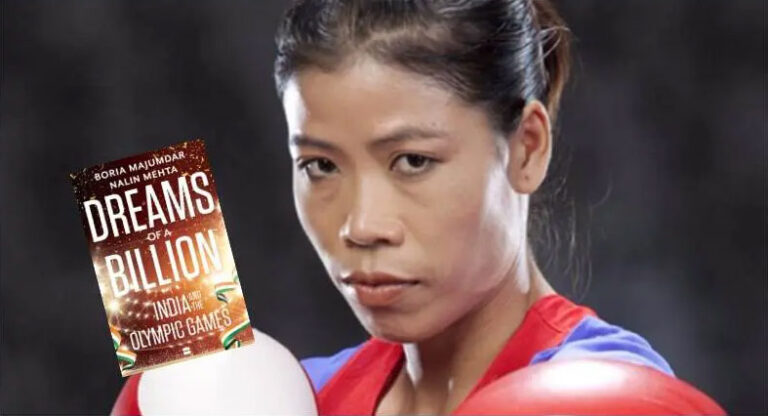 Mary, at the age of thirty-six, defied norms and won gold at the Gold Coast Commonwealth Games, at the Asian Games and also at the World Championships in Delhi, increasing her World Championship gold medal count to six.

Soon after the competition, we met Mary in Mumbai. She was there as the face of the Tata Mumbai Marathon and looked more focused than ever. Not only did she sing on stage and bring the audience to its feet, but she was also in a perfect headspace to speak about her future. ‘People have 72 dreams of a billion started to expect the gold medal from me in Tokyo’, she said before adding, ‘What people don’t realize is that I will yet again have to fight in the 51 kilogram category with boxers who are taller and stronger. But I am not saying this as an excuse. All I am trying to say is it will not be easy to make it to Tokyo and win a second Olympic medal.’

That’s when Boria decided to interrupt and tell her that nothing has ever come easy to her. Born in a lower middle-class household, she had to walk miles to make it to school, which was a fair distance away from her native village. She was beaten up by her father for wanting to pursue boxing and was racially vilified ever since she came to Delhi.

She became used to hearing ‘chinki’ taunts before she went on to win multiple medals at world competitions and became ‘Magnificent Mary’. She overcame the odds and beat Nikhat Zareen, fourteen years younger, at the Indian Open in May 2019 and won gold at a World Championship preparatory event two months later. It is important to note that there was a well-publicized controversy involving Zareen when Mary was given direct entry into the World Championships in October 2019 without having to fight her again.

A similar issue arose between the two over representing India at the Tokyo Olympics. Zareen, known for having won a bronze medal at the 2019 Asian Championships, made an impassioned plea to the sports minister and the Boxing Federation of India for a trial bout. Abhinav Bindra sided with her, saying that as athletes you are always judged in the present and not by what you have accomplished before. Hence, it was a matter of time before a trial was organized. The federation, while initially reluctant, did eventually give in, saying that the same rules should apply to everyone. This controversy should never have been allowed to fester. Their selection trial was scheduled for December 2019, by which time this book would have already gone to press. Mary, who had publicly opposed the trial match, wasn’t pleased with the outcome but was left with no option but to accept the ruling. Frankly, this is the best way forward.

In spite of all this, few will dispute that Mary is still the best boxer in her category in India. She proved this at the World Championships by becoming the first-ever boxer in history to win a record eight medals, surpassing Cuban legend Felix Savon.

This medal, to the ones who saw her fight, was not easily won. She had a tough draw and, despite the first-round bye, the route to the medal was tough. Facing the spunky Thai Jitpong in the second round, Mary had to bring all her experience to the fore against someone who was throwing wild punches, hoping some would connect. Mary sussed her beautifully in round one before going to attack in rounds two and three, eventually winning by a unanimous 5–0 verdict. It was the same story in the quarter-final against her Colombian opponent, who many thought was capable of causing an upset. But Mary was all over her in the second round and by the end of the bout, there was clearly one winner.

She proved this at the World Championships by becoming the first-ever boxer in history to win a record eight medals, surpassing Cuban legend Felix Savon.

When the referee raised her hand saying the customary, ‘And the winner in the red corner …’, all she did was smile. There wasn’t any over-the top celebration. Mary knew that the World Championships were not her mission. Tokyo 2020 was.

These anecdotes and other wonderful conversations with India’s sport stars are from Dreams of A Billion – India and the Olympic Games by Nalin Mehta, Boria Majumdar published by Harper Collins