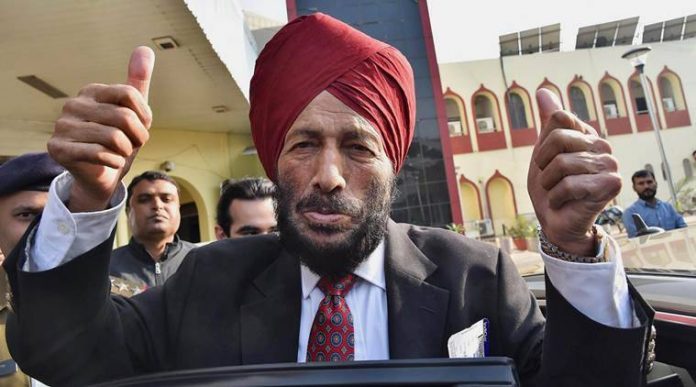 As a country, we still finish fourth in athletics, but The Flying Sikh will always remain in our folklore as a victor and hero

Milkha Singh, Indian’s sporting icon for half a century, who created a mythic macho hero image with qualities the Indian male never had, breathed his last in Chandigarh, a week after his wife, Nirmal Kaur, passed away, after a lengthy fight against COVID. He was 91.

There is no Indian who hadn’t heard of The Flying Sikh as he was known all these years. Milkha Singh’s fame rested on his finishing fourth in the Rome Olympics in 1960 in 45.70 seconds, a national record that stood in his name for many years. He assumed all-conquering and often supernatural powers on which India’s male macho fantasy fed. He was dined and feted throughout the country, got embedded in Indian folklore and generations of children were forced to drink milk on the promise of becoming another Milkha Singh.

Sadly India never produced a runner of his calibre, though a few of them came close to him. An Olympic medal in athletics still eludes India and the last thought on the great runner’s mind might have been this long-lasting blot on India’s sporting history.

Ever since he finished fourth in the 400m Rome Olympics, Milkha also created in us the early stirring of post-Independence nationhood and pride. His inability to win a medal, though narrowly, was after all a minor flaw and India had got in him a symbol of what all its men and women should be: strivers for medals, never matter if we fall short. India tried, no doubt. There is nothing wrong in hero worship for his very name inspired thousands of youngsters to strive to win.

So blind was our love for Milkha Singh that we rated him higher than Olympic gold medal winners. A few years back when Olympic 400 m relay gold medal winner and 100m world record holder for many years, Asafa Powell came to inaugurate the AirTel marathon in Delhi, it was Milkha Singh who was the star on stage while Powell stood in the shadows. Milkha spoke in hundreds of functions from schools to national meets to marathons. Everywhere he was the winner who gave advice.

In the history of national adulation, Milkha Singh was a miracle that we happily sustained. Even as a cultish hero, he scored over Dhyan Chand and other great hockey players who were members of the all-conquering hockey teams in many Olympics. Hockey might also have slipped out of our hands, but Milkha Singh rode all these ups and downs, always the triumphant icon.

The culmination of this adulation came when the stirring Bollywood movie on him ‘Bhaag, Milkha Bhaag’ was made on his life. A Bollywood movie means much more than any medal in India. But in terms of sporting might the country reached nowhere, content as we were in the many years of imagined glory, imagined athletic prowess, and imagined global might.

Part of the Milkha Singh myth was also the Milkha Singh joke which passed on from generation to generation along with embellished stories of his speed: A reporter in Rome approached him after the famous 400-m run and asked him: Are you relaxing? “No, I’m Milkha Singh” the great Indian runner replied innocently and quickly. This joke, based on an innocent, unintended pun, grew in national consciousness beyond all imagination.

It also inspired many other so-called Sikh jokes where the entire nation took special pleasure in making fun of a hard-working and high-achieving community. Sikhs were nationally wrongly depicted always in folklore, literature, and in local banter as innocents who lacked education, intelligence, and mental sharpness.

Sikhs have been in the forefront of Indian sporting achievement apart from the larger contribution to nation-building. Sikhs and Sikhism has done India proud. Milkha Singh was in the forefront embodying the daredevilry of the frontiersman. To go where others haven’t and do the best. The first two pages of Boria Majumdar and Nalin Mehta’s brilliant book Olympics: The India Story is filled with pictures of Sikh hockey players most of whom are also household names for the medals they brought. Between 1928 and 1956, Indian hockey team won six straight Olympic medals and 24 consecutive matches. India won gold again in 1964 and 1980. But Milkha Singh was better known than all the great hockey players barring Dhyan Chand.

After Milkha Singh it was another Sikh who came close to an Olympic athletic medal GS Randhawa in the 110 M hurdles. Few remember him nor any of the immortal hockey players of Punjab like the triple Olympic gold medallist (London 1948; Helsinki, 1952; Melbourne, 1956,) the late Balbir Singh Senior after whom a stadium in Punjab has now been named. But Milkha we never forgot.

Milkha Singh was top favourite to win the 400 m in Rome but in a tactical mistake (repeated often by Indian athletes later) ran the beginning a bit too fast as The Hindu reported: “Milkha Singh drew the best lane and everything was in his favour to produce his best. The finalists took an excellent start and it was Milkha Singh and Kinder who led first. Nearing the finish Davis overtook all with Kauffman close on his heels. Milkha Singh was then lying fourth behind Spence. Between Milkha Singh and Spence there was hardly a foot difference and had Milkha Singh run a well-judged race instead of bursting out from the start, he might have clinched the bronze medal.”

Majumdar and Mehta quote Milkha Singh on his race: “ …After running furiously fast in lane five for the first 250 metres, I slowed down a fraction. At that point, I even looked back or maybe it was just a side-glance. That fraction of a second decided my fate, allowing others to overtake me. I could not cover the lost ground after that and that one mistake cost me the race and the medal.”

It cost the country even more as the Olympic athletic medal still eludes the country 60 years after that immortal run. As a country, we still finish fourth. But Milkha Singh will always remain in our folklore as a victor and hero.

Share. Facebook Twitter Pinterest LinkedIn Tumblr Email
Previous ArticleWith the deaths of its pillars Anil Dharker and Shashi Baliga, what lies ahead for Tata Litlive?
Next Article UPES School of Modern Media invites you for an invigorating masterclass on ‘Olympics and Sports Media in Times of Pandemic