Nalin Mehta’s ‘The New BJP’, a deep-dive into the party’s rise 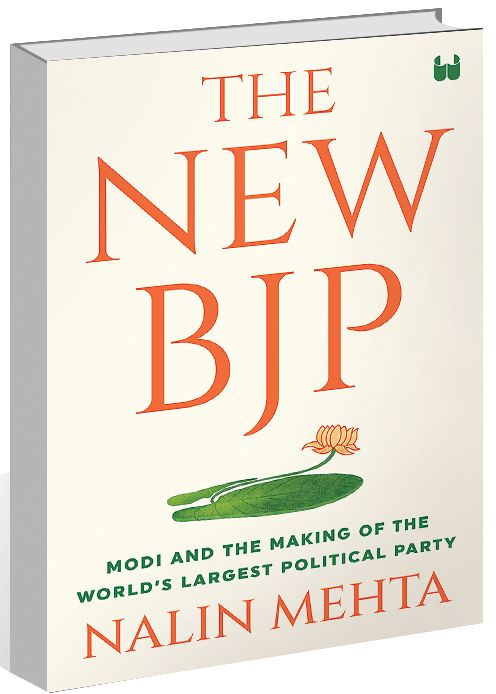 NARENDRA MODI’S ascendancy as Prime Minister in 2014 and his factotum Amit Shah’s appointment as the BJP president shortly thereafter signified the beginning of deep-rooted changes in the party’s working, without altering its fundamental character and credo moulded by the RSS’s ideology and morality, faux morality one might say.

Journalist Nalin Mehta’s book is a deep-dive into the BJP’s post-2014 phase with adequate references which locate the transformations in a historical context. The most revelatory is that the idea of demonetisation goes back to 1971, when “Atal Bihari Vajpayee, then Jan Sangh president, announced that his party would demonetise currency to eliminate black money if it was voted to power”. Modi revived it over four decades later, ostensibly as a “lightning strike on black money”, in the words of a member of the Pune-based think tank, Artha Kranti Pratishthan, on which Modi leaned for validation.

To call the book ‘The New BJP’ is a stretch. An RSS ‘pracharak’ once told me that his organisation obsesses over tweaking the nuts and bolts of whatever institution it lays its hands on, without considering the long-term impact of the exertions. ‘Vyavastha parivartan’ (changing the arrangement) is the operative phrase, with the rider that no departure from the ideological moorings will be countenanced. As Mehta confirms, “From Shaheen Bagh to cow slaughter, in virtually every public controversy on its core principles since 2014, the BJP’s responses have been a direct extension of the lines that its forebears took in the Jan Sangh.”

Largely using UP for his field study (although Mehta goes to the North-East and Karnataka), he dwells extensively on the BJP’s success in weaving together a social fabric made up of the myriad castes dotting the landscape. The OBCs formed the warp and weft of the fibre because the BJP figured that they were spread over too vast an expanse to be discounted as inconsequential, as the Congress tended to.

The exercise began in 1991 under the tutelage of the BJP’s original social engineering author, KN Govindacharya, and reached its conclusion under Modi and Shah. If the former UP chief minister, Kalyan Singh, a backward caste Lodh-Rajput from the west-central region, was the BJP’s pioneering OBC mascot, Modi, a Teli from Gujarat, is the present-day good luck piece. Employing the Mehta-Singh (after his collaborator Sanjeev Singh, a journalist) Social Index to analyse caste dynamics, the author correctly demonstrates that the BJP “systematically increased OBC representation in very significant numbers at every level of its political organisation in UP” and assiduously cultivated a base among the non-Yadav OBCs who were under-represented in the Akhilesh Yadav dispensation, but given their due share under Mayawati, the Bahujan Samaj Party president, who was CM from 2007 to 2012.

Mehta rightly points out that the BJP accomplished its social engineering feat without losing the support of the upper castes, but does not explain how it happened. Thus, the logical inference is that the Brahmins, Rajputs and Baniyas believed their interests were “protected and safe” even under an OBC-tilted BJP because the OBCs and Dalits were, at best, adjuncts in its caste matrix.

Mehta should have anticipated that the best laid plans can go awry; despite the social engineering, the BJP sought the hand of identity-driven parties to accrete its OBC substructure in UP. Some of them snapped their ties as the book was being written and the limitations and implications of the BJP’s blueprint could have been factored by the author. The results are evident. The fabric has frayed on the edges before the UP polls.

The novelty of the Modi-Shah era lies in their unrivalled use of digital technology and the complexities entailed in labelling the BJP as right wing. The chapters on ‘Modi@Digital’ and ‘When Right is Left’ stand out for different reasons: the first for the BJP’s far-sightedness in recognising, exploring and exploiting cyber space, often to devious and distasteful ends, and the latter for effectively combining welfarism and populism with Hindutva for an electoral cocktail.

The book could have done with more anecdotes, and portraits of the protagonists.