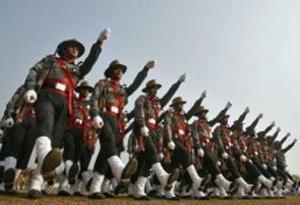 Roman emperor Augustus started the tradition of military pensions in 13 BC, when every legionary who had fought 20 years for Rome was guaranteed a pension for-life. It set the bar for modern armies, and independent India continued the British tradition of financially privileging military service until the mid-1970s, when soldiers were paid more than civilian bureaucrats, in service and after retirement. All that changed with the Third Pay Commission, which brought military salaries in line with civil services, and while soldiers have long complained about political control over the military in independent India mutating into bureaucratic control, a row over the NDA’s promise for one-rank-one-pension (OROP) for military veterans is raising questions about the government’s ability to translate its intent into action.
Fifteen months after Narendra Modi first demanded it immediately after being anointed the BJP’s PM candidate, 10 months after the UPA government granted it, five months after NDA’s finance minister Arun Jaitley confirmed it and almost two months after the PM told soldiers in Siachen that it was his “destiny that onerank-one pension has been fulfilled”, military veterans are questioning why the promise has still not been implemented.

Put simply, OROP means that every pension-eligible soldier who retires in a particular rank deserves the same pension, irrespective of date of retirement. Currently, soldiers who left the armed forces more recently receive more than those who did earlier, because successive pay commissions hiked salaries. Two days after he was anointed BJP’s PM-candidate in September 2013, Modi vehemently supported the OROP demand at a veterans’ rally in Rewari. With roughly 12 lakh veterans also constituting a huge vote-bank, UPA government approved the demand in February 2014, and it was reaffirmed by NDA in July, when finance minister Arun Jaitley specifically provisioned Rs 1,000 crore in his 2014-15 budget (within an overall defence pensions budget of Rs 51,000 crore). Yet, it remains stuck in bureaucratic wrangling. 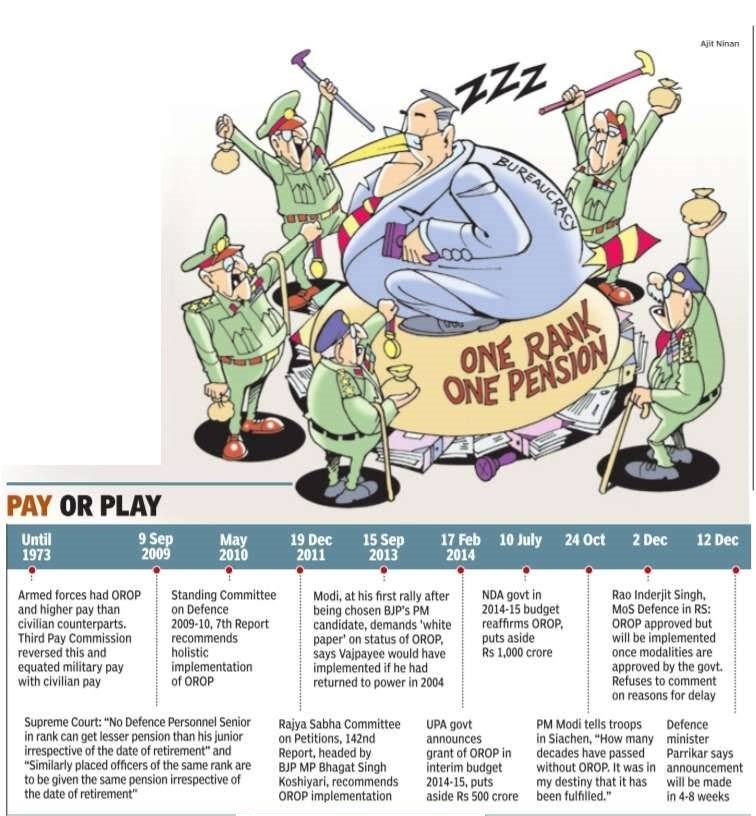 At the heart of the problem are bureaucratic disagreements over costs. The finance ministry told a parliamentary committee in 2011 that it would cost Rs 1,300 crore a year while defence ministry pegged annual cost estimates at Rs 3,000 crore. Yet, now that OROP has been approved, the Comptroller of Defence Accounts has reportedly put the bill as high as Rs 9,300 crore per annum (see charts).

Defence minister Manohar Parikkar has held stakeholder meetings to resolve the crisis, most recently on December 10, with no clear solution yet. Veterans’ groups are perplexed at the changing goalposts, blaming the bureaucracy for being obscurantist. Says Lt Gen SK Bahri (retd), chairman, Alliance of Ex-Service men Organisations: “The bureaucracy is fighting a rear-guard action. It is not difficult to find funds but our problem is the lower bureaucracy which can stop anything in the ministry . We are fighting an internal enemy .”

Veteran groups, fighting the OROP battle for at least two decades, claim they don’t have the ears of the leadership.”Whatever the bureaucracy tells them, they believe,” says Lt Col Inderjit Singh, chairman, All-India Ex-Services Welfare Organisation. Reassuring doubters, Parrikar was recently quoted as saying that “the government is seriously considering implementing the one-rank-one-pension policy” and the “announcement will be made in four to eight weeks”. 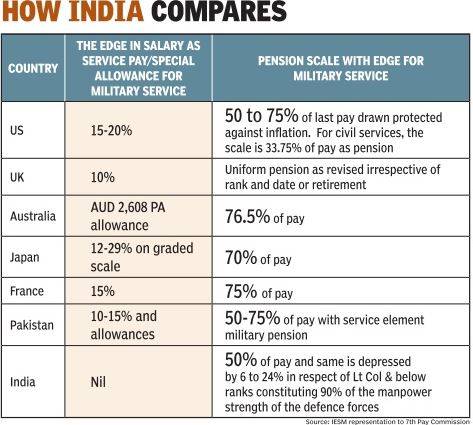 His words may reassure veteran groups who have been organizing protest rallies. Their social media networks are full of invective and a growing sense of “betrayal” and “disillusionment”, which is fast gaining a political edge. The fight for OROP, in this narrative, is turning into a new cipher for the ever-present military trope of overbearing bureaucrats being allowed to ride rough-shod over them in a defence ministry that is still not integrated with service headquarters, as in other liberal democracies.

The problem is that different departments used different formulas to calculate costs but as Major Navdeep Singh, advocate in Punjab and Haryana High Court points out, “the directive to break this logjam has to come from the top”. “There seems to be an anti-services sentiment in the lower bureaucracy ,” he adds, “but higher echelons must overrule such disputes.”

The case for OROP is predicated on military terms of service being much harsher than those for civil services. Most soldiers retire between 35-37 years of age, while officers below brigadier-or-equivalent do so at 54, with limited re-employment options. Civil servants, in contrast, retire at 60.

Moreover, the Sixth Pay Commission granted the facility of what bureaucrats call “non-functional upgrade” (NFU) to officers in all-India Group A services.This is a sort of `pay-promotion’, allowing them, under certain conditions, to draw higher pay than their rank, without actually being promoted. Almost all civil servants benefit from this while defence services officers do not, even as their career pyramid is much steeper.Only 0.8% of defence officers make it to the rank of major general after 28 years of service, compared with a much higher rate of civil servants who are eligible to become joint secretaries at 19 years of service. As Major Navdeep Singh says, veterans see NFU as a sort of “OROP by backdoor for civil servants”.

Many distinguished veterans argue that they are only asking for what was promised to them, pointing to the aphorism of Chankaya, the architect of the Mauryan empire, who is said to have advised his prodigy Chandragupta Maurya thus: “The day a soldier has to demand his dues will be a sad day for Magadha. From then on you have lost all moral sanctions to be King.”