Ramesh Sippy knew the menace of numbers when he made Gabbar Singh intone his immortal “kitne aadmi they” line in Sholay. The silky rough voice of Amjad Khan is a world away from the earthy tones of Lalu Yadav but make no mistake, his winning argument in the Lok Sabha for an OBC Census carries with it a deep sense of foreboding. Lalu has perfected the fine art of playing the good natured country bumpkin for TV audiences but he knows the politics of numbers and one quote stands out: “Ab hamaree counting ho jaaye.”
The government’s cave-in on the OBC issue to the two Yadavs may be expedient politics to keep the Lok Sabha running but it has opened up a new front that in time could make the Mandal disturbances look like a kindergarten party. Why is the decision to count OBCs so worrying? Since 1951, the Census of India has always counted Scheduled Castes and Scheduled Tribes anyway so why not count OBCs as well now? After all, they have been the beneficiaries of 27% reservations post-Mandal, but today’s quotas were calculated from a complicated survey methodology in the absence of detailed nationwide numbers. Getting an accurate picture of the real numbers will only help target reservations better. This is broadly the argument of the pro-OBC counting camp. In an ideal world, such an argument would make sense. The problem is that Indian politics is not an ideal world.
If social upliftment was the real goal, then the OBC chieftains would have been equally bothered about counting below-poverty lines figures in absolute terms. The thousands of crores spent on programmes for below poverty line families also depend upon survey estimates and intricate definitions about calorie intakes that mean little in practical terms. The issue here is not some esoteric concern for greater statistical accuracy or an overriding desire for dispensing greater justice for the downtrodden. As Deve Gowda indicated, the one motivating factor here is the probability of finding numbers that could possibly provide enough ammunition to demand an increase in OBC quotas and challenge the Supreme Court’s 50% ceiling on reservations.
Reservations have done many good things to India but they have also created a uniquely Indian politics of agitation around entitlement rights. In a country where government is still identified with a mai-baap culture, the reservation system has bred a sort of reverse competition to be below the caste threshold. The now dormant Gujjar-Meena conflict in Rajasthan is a case in point and equally a demonstration of how quickly things can go out of hand when it comes to community rights. Numbers are power and both Lalu and Mulayam know this, rising as they did to prominence out of the post-Mandal churn in the Hindi heartland. Now that both are on the defensive politically, a possible new battlefront with the new numbers the Census may throw up certainly looks appetising.
The problem with quantifying caste is that it makes it more rigid, locking identity permanently in place. Most critical accounts of colonial India show that British efforts at codifying Indian society and quantifying castes and their numbers through modern Census exercises actually ended up solidifying social structures that were once far more fluid and interchangeable. The very act of recording caste turned it into an immutable category. It is difficult to imagine today but pre-colonial India arguably had far more social mobility.
Democratic India was meant to be end caste divisions. Yet the competitive pulls of electoral politics ended up solidifying caste even further as vote banks. No one can oppose upward social mobility but the politics of reservations is such that it spawns a permanent self-perpetuating cycle. India does not need the ghosts of Mandal reawakened but by overturning six decades of policy in just two days of parliamentary turbulence, the government may well have given them a new life.
(Author and social historian Nalin Mehta writes on politics and public culture.) 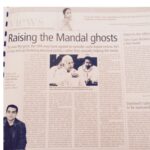