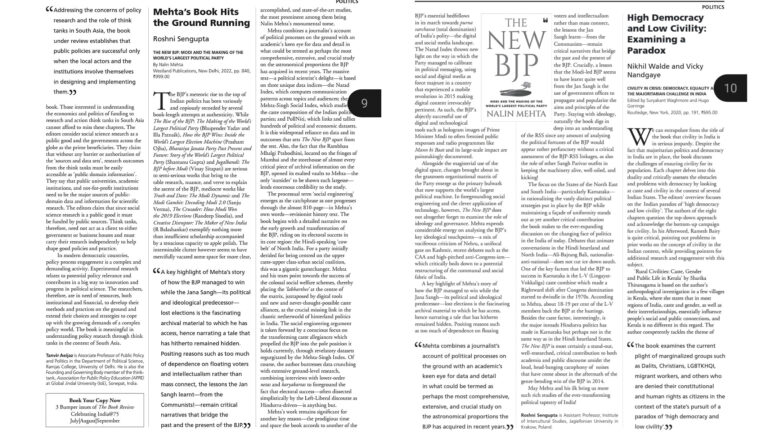 The BJP’s meteoric rise to the top of Indian politics has been variously and copiously recorded by several book-length attempts at authenticity. While The Rise of the BJP: The Making of the World’s Largest Political Party (Bhupender Yadav and Illa Patnaik), How the BJP Wins: Inside the World’s Largest Election Machine (Prashant Ojha), Bharatiya Janata Party Past Present and Future: Story of the World’s Largest Political Party (Shantanu Gupta) and Jugalbandi: The BJP before Modi (Vinay Sitapati) are serious to semi-serious works that bring to the table research, nuance, and verve to explain the ascent of the BJP, mediocre works like Truth and Dare: The Modi Dynamic and The Modi Gambit: Decoding Modi 2.0 (Sanju Verma), The Crusader: How Modi Won the 2019 Elections (Randeep Sisodia), and Creative Disruptor: The Maker of New India (R Balashankar) exemplify nothing more than insufficient scholarship accompanied by a tenacious capacity to apple polish. The interminable clutter however seems to have mercifully vacated some space for more clear, accomplished, and state-of-the-art studies, the most prominent among them being Nalin Mehta’s monumental tome.

Mehta combines a journalist’s account of political processes on the ground with an academic’s keen eye for data and detail in what could be termed as perhaps the most comprehensive, extensive, and crucial study on the astronomical proportions the BJP has acquired in recent years. The massive text—a political scientist’s delight—is based on three unique data indices—the Narad Index, which computes communication patterns across topics and audiences; the Mehta-Singh Social Index, which studies the caste composition of the Indian political parties; and PollNiti, which links and tallies hundreds of political and economic datasets. It is this widespread reliance on data and its outcomes that sets The New BJP apart from the rest. Also, the fact that the Rambhau Mhalgi Prabodhini, located on the fringes of Mumbai and the storehouse of almost every critical piece of archival information on the BJP, opened its exalted vaults to Mehta—the only ‘outsider’ to be shown such largesse—lends enormous credibility to the study.

The processual term ‘social engineering’ emerges as the catchphrase as one progresses through the almost 810-page—in Mehta’s own words—revisionist history text. The book begins with a detailed narrative on the early growth and transformation of the BJP, riding on its electoral success in its core region: the Hindi-speaking ‘cow belt’ of North India. For a party initially derided for being centred on the upper caste-upper class-urban social coalition, this was a gigantic gamechanger. Mehta and his team point towards the success of the colossal social welfare schemes, thereby placing the ‘labharthee’ at the centre of the matrix, juxtaposed by digital tools and new and never-thought-possible caste alliances, as the crucial missing link in the chaotic netherworld of hinterland politics in India. The social engineering argument is taken forward by a conscious focus on the transforming caste allegiances which propelled the BJP into the pole position it holds currently, through revelatory datasets regurgitated by the Mehta-Singh Index. Of course, the author buttresses data crunching with extensive ground-level research, combining interviews with lower-order netas and karyakartas to foreground the fact that electoral success—often dissected simplistically by the Left-Liberal discourse as Hindutva-driven—is anything but.

This review was first published on The bookreviewindia.org| June 2022

Christianity And The Debate Over Conversions In India